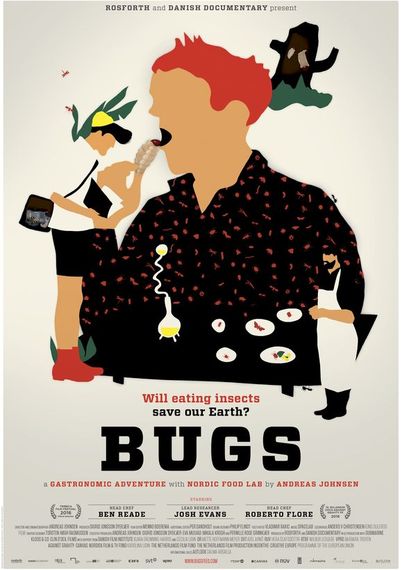 Will maggot fat oust coconut oil as a foodie favorite? Is PepsiCo replacing the corn flour in its Fritos with ground cricket corpses? And, hey! Who doesn't want to bite into some chicken with garlic and saffron sauce topped with crumbled buffalo worms?

Answers: Possibly. Not yet. Less people than you might think.

Andreas Johnsen's Bugs, just one of the many enlightening documentaries featured at last week's Tribeca Film Festival, focuses on a team from the Copenhagen-based Nordic Food Lab, "a nonprofit organization investigating food diversity and deliciousness." The lead duo chaperoning us in this doc, Ben Reade and Josh Evans, are part of a three-year research project on edible insects. They travelled to Kenya, Japan, Mexico, Italy, and several other insect-infested destinations to unearth the culture and cooking techniques of a few of the two billion individuals who are already noshing on the creepy-crawlers that many of us buy Raid to exterminate. 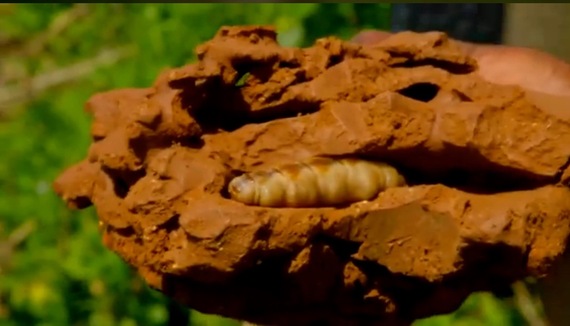 A queen caterpillar -- a delicacy for kings.

The boisterous Reade is a ginger, masterly chef who'll put anything into his mouth, dead or alive, when he isn't opinionating, which is seldom. Sort of an apron-clad Christopher Hitchens, this cook dreams of a world without starvation, one that doesn't benefit multinational food conglomerates such as Nestlé and Cargill. One of his fears is that some day capitalists will be farming locusts and crickets, and selling them at prices out of reach to the poor, but he has even bigger concerns about the abysmal eating habits of his contemporaries. . . us. Just imagine a diet lacking delicious Australian grubs and Japanese wasps.

"Why don't Westerners eat these things?" he asks. "The idea of eating raw fish was once considered revolting. Now it's a convenience food in train stations. Ideas that provoked disgust in the past really turned around very, very quickly."

His partner-in-arms, Evans, a somber Canadian Yale graduate and researcher, is more tight-lipped, but when he does open up, his spoutings are suitable for engaging academic pamphlets. 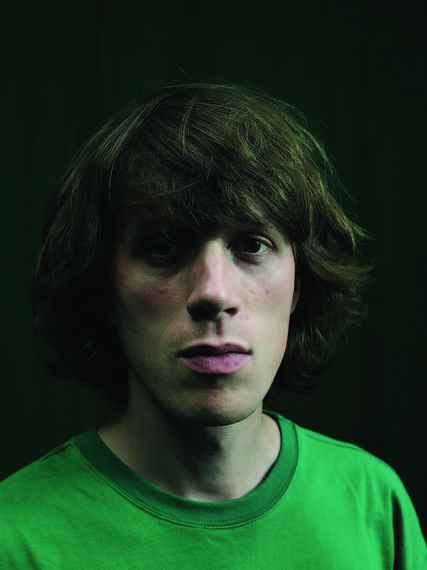 Rather an Odd-Couple pairing, the duo's chemistry supplies a rather endearing entrance into the world of entomophagy (shorthand for eating insects, especially by humans). You can't help but grin as they comment on a charred caterpillar they've just swallowed: "It's super nutty, like a macadamia vibe." Or find a huge edible specimen in the bark of a tree: "Holy macaroni! That's a monster." Or after biting into a juicy termite queen, which they serve with mango: "It's like God's homemade sausage."

In fact, Reade's only gastric disaster during his travels is getting food poisoning from a burger he chowed down in Sydney.

While this is a wild trip, especially the battle with the deadly Japanese wasps, the seriousness, of the lads' quest, though, is never left far behind. For instance, in Kenya, many children under five are dying from diarrhea due to a lack of zinc, a deficiency which the abundant supply of local crickets could remedy, a food activist there shares. Also, it is also noted that "by 2050, the world will be home to over 9 billion people. The Food and Agriculture Organization of the United Nations (FAO) estimates that food production will have to increase by 70 percent. According to FAO, insects will be a crucial part of our future diets."

Evans adds a bit later on: "There's enough food to feed 12 billion people right now. The problem is all the power structures that perpetuate inequality of access to food." The problem is greed and not agriculture. 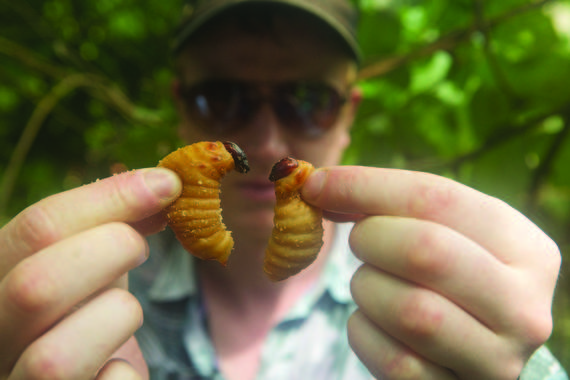 Head chef Ben Reade wonders what Julia Child would do with his latest finds.

So with verve, Bugs takes a topic that might ordinarily make the squeamish quite queasy and instead, with intelligence and some humor, allows us to identify with the hardships we and our world will have to overcome both in the present and even more direly in the future. It conveys with a common sense approach that insects might just be our saviors.