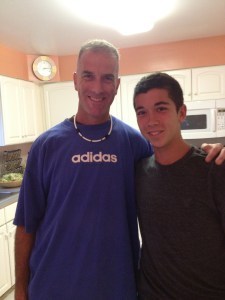 Yesterday, I received the devastating news that my friend, Sol Schwartz, had died suddenly due to a massive heart attack. He was 46 years old. He was a husband, a father of two, a son, a brother, an uncle, a coach, a mentor, and a friend.

And here is where I could put on my "Journalist" hat and go through all of Sol's accomplishments -- both personal and professional -- while pontificating on a life cut short.

But I can't go that route. My heart is hurting too badly, and I need to share the Sol I knew and loved. Love.

I first "met" Sol in the way I "meet" so many people these days: via Facebook. He and I were both members of a tennis-themed group and both posted regularly, I about tennis parenting and he about college tennis. I guess it was our passion for the sport that first drew us toward each other. Sol began tuning into my weekly radio shows and calling in to ask questions and share his opinions on a regular basis. Soon, he and I started talking on the phone, discussing what we could each do to improve our sport.

In the spring of 2012, Sol came up with the idea of hosting a non-sanctioned open-age-group tournament with the winner receiving a one-year sponsorship from Adidas. He worked with his employer, Holabird Sports, and his contacts at Adidas to bring the tournament to life. He then invited me and my son to participate. How could we say no? Rather than telling you about our experience here, I urge you to read this piece so you can get a feel for what this tournament meant to my son and the other players.

That Holabird-Adidas tournament was the first time I actually met Sol in person. But when he picked us up at our hotel to take my son for a practice hit, it was like being picked up by an old friend. There was no awkwardness, no moment of hesitation, simply a connection that was already established because of our extensive phone calls and Facebook interactions. This man was genuine and good-hearted and took us into his city and into his home and made us an immediate part of his family.

We spent that weekend with Sol, his wife, his kids, his in-laws, his co-workers, and countless others who had the good luck to be impacted by this gentle man on a regular basis. Our friendship was forever sealed.

Sol became my biggest cheerleader. He would text me encouraging messages and post things like "Rockstar Tennis Mom" on my Facebook page. By that point, I knew what a big heart he had, but it wasn't until Hurricane Sandy hit the Eastern coast of New York that I got a real sense of what his big heart could do.

As soon as he heard about the devastation, especially to the area's public and private tennis facilities, Sol initiated a fundraising campaign through Holabird to get the local coaches back on their feet. He solicited donations from all his industry contacts for things like cases of balls and hoppers so the coaches could get back to work. He took to social media and posted daily on the various tennis groups asking for donations of time, money, and equipment. He connected with the local USTA office so he could stay on top of their needs. When they asked for something, ANYTHING, Sol delivered. He was their angel during a time of real crisis.

It was during that crisis that Sol was introduced to Melanie Rubin (Noah's mom) and decided that she and I needed to meet. He put us in touch with each other, and we became fast friends, talking on the phone at least weekly over the next several months.

When my 50th birthday rolled around a couple of months later -- which also happened to be Sol's 43rd birthday (how could we have NOT been friends when we shared the same birthday?) -- I got a huge package in the mail postmarked from Baltimore. Sol remembered how much I had LOVED the area crabcakes when we were there for the Holabird tournament, so he had a case of them shipped to me. I think it was at that point that my husband truly understood why my son and I had become so close to this sweet man.

A few weeks later Sol called me up and suggested something waaaaay outside the box. He told me I needed to apply for media credentials at the upcoming U.S. Open and have Melanie there as my assistant, two Tennis Moms sharing their experience through ParentingAces, me as a spectator and Melanie as the parent of one of the players. Never in a million years did I envision ParentingAces opening THAT door for me, and it NEVER would've happened without Sol's belief and encouragement. That was his gift, though -- seeing things in people that they wouldn't dare dream of seeing in themselves. And it fostered a deep friendship that will live on, only with Sol smiling down from above instead of standing right there beside us. 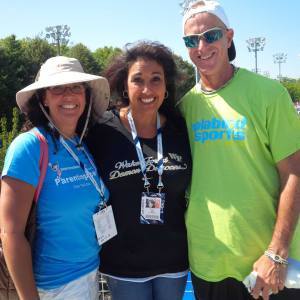 Throughout the end of my son's junior tennis years and college recruiting, Sol was there as a sounding board, not just for me but also for my son. He would check in with both of us on a regular basis to see if we needed anything. And periodically we would get little surprises tucked into our Holabird orders -- t-shirts, hats, socks -- Sol took care of us on so many levels. He had a sixth sense alerting him to call or text me at precisely the times I needed to hear from him. And his words of encouragement always did the trick.

For my son, Sol acted as a mentor. He would ask the right questions or just listen if that's what was needed. And my son was but one of many young people who had this type of relationship with Sol. Just ask the kids who play on the UMBC team (which Sol fought so hard to save when it was announced both the men's and women's teams would be cut after this year). Or the kids who train at the local indoor courts. Or the kids who come into the Holabird headquarters. Or, I suspect, the kids who play sports with Sol's own children.

My heart is breaking. For myself, yes, but especially for Sol's amazing wife, daughter, and son who have to find a way to honor his memory as they continue to live life without their rock. If I know Sol, he will come up with ways of encouraging them to be the best versions of themselves, whether appearing in their dreams or on the wind or as a voice in their hearts. 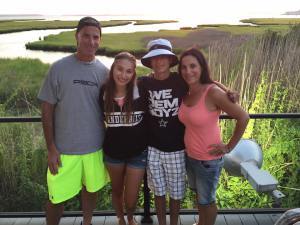 I keep picturing you, tennis racquet in your hand, backward cap on your head, fighting the good fight from above. I would tell you to rest peacefully, but I know "rest" isn't part of your vocabulary. Trust those of us you left behind to continue the good work you have started. It is how we can best honor the man, the gentle man, that is Sol Schwartz.