Halloween is around the corner, and children will soon be dressing up and chanting "trick or treat," their demand for candy backed up by the threat of a prank. Climate-change activists, from pranksters to presidents, are doing the same. This past Monday, the activist artist group The Yes Men staged another of its hoaxes, with one member posing as an official from the U.S. Chamber of Commerce leading what appeared to be a legitimate press conference and stating the Chamber's complete reversal on its historically adamant opposition to climate-change legislation. Meanwhile, in the Indian Ocean, the president of the Maldives held the world's first underwater cabinet meeting, demonstrating that rising sea levels could very soon overwhelm his archipelago nation. With the Copenhagen climate conference less than 50 days away, people are stepping up the pressure.

The Yes Men stage elaborate hoaxes on global-trade organizations, multinational corporations and politicians. They satirically skewer corporate, free-trade, pro-business positions by acting as genuine, sincere spokespeople for these institutions, often offering apologies for past corporate crimes or promoting absurd products with remarkably straight faces at industry conferences. In December 2004, on the 20th anniversary of the Bhopal, India, disaster in which a Union Carbide plant gas leak killed thousands of people, Andrew Bichlbaum of The Yes Men appeared on BBC News posing as a representative of Dow Chemical (which bought Union Carbide), claiming Dow would finally take full responsibility for the accident.

In 2007, Yes Men Bichlbaum and Mike Bonanno addressed Canada's largest oil conference, posing as executives of ExxonMobil and the National Petroleum Council. They announced a plan to convert the corpses of the expected millions of victims of climate change into a fuel they called "Vivoleum." They were ejected, after which Bonanno told the press: "While ExxonMobil continues to post record profits, they use their money to persuade governments to do nothing about climate change. This is a crime against humanity."

At this week's faux press conference in Washington, D.C., Bichlbaum read from a statement: "We at the Chamber have tried to keep climate science from interfering with business. But without a stable climate, there will be no business." Fox Business News and other global news outlets carried the story of the Chamber's surprise support of climate-change legislation. During the press conference, an actual U.S. Chamber of Commerce employee entered, loudly declaring the event a fraud, but exposing himself to probing questions about the Chamber's position on climate change.

Several major corporations have quit the Chamber because of its opposition to genuine climate-change legislation, including Apple, Exelon, PG&E and Levi Strauss & Co.

The U.S. Chamber's resistance to science-based climate policy is nothing new. Career public-relations executive James Hoggan is the author of Climate Cover-Up: The Crusade to Deny Global Warming. Hoggan told me, "The PR stunt wasn't pulled off by The Yes Men; the PR stunt is basically being pulled off by the U.S. Chamber of Commerce, and it's been going on for decades." Hoggan's book describes what he calls "a two-decade-long campaign by the energy industry in Canada and the United States, basically designed to confuse the public about climate change, and to give people the sense that there is a debate about the science of climate change."

Oct. 24 is the global day of action organized by the group 350.org, which includes environmentalist Bill McKibben. Named after what scientists have identified as a sustainable target for carbon-dioxide concentration in the atmosphere, 350 parts per million (we are currently at 387 ppm), 350.org lists close to 4,000 events around the world on Oct. 24. The goal is to pressure government representatives prior to their departure for the major United Nations climate summit that will be held in Copenhagen in December. 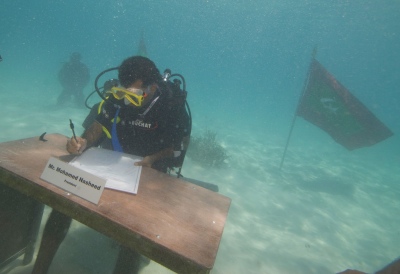 President Mohamed Nasheed of the Republic of Maldives is already taking action. Last week, he held an underwater cabinet meeting, donning scuba gear and literally meeting in 20 feet of water in the world's lowest-lying country. They signed an "SOS from the frontline" declaration, reading, in part, "If we can't save the Maldives today, you can't save the rest of the world tomorrow." He will carry the declaration to Copenhagen.

U.S. government leadership will be critical to clinching a substantive deal in Copenhagen, but the Senate has not finalized any climate legislation, which essentially ties the hands of U.S. negotiators. Oil, gas and coal interests are spending $300,000 a day lobbying the government. The moment of climate-change truth is upon us, and the professional deniers are up to their old tricks.

Amy Goodman is the host of "Democracy Now!," a daily international TV/radio news hour airing on more than 800 stations in North America. She is the author of "Breaking the Sound Barrier," recently released in paperback.