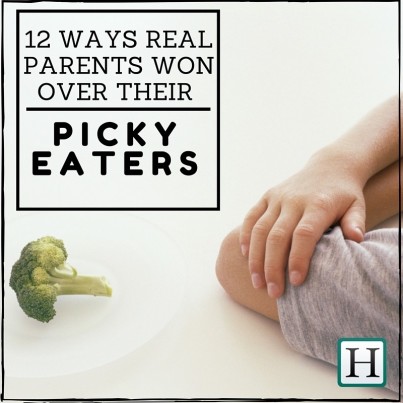 If you’ve ever tried serving a meal from a cookbook with a name like Dinners Picky Eaters Will Devour! and your child wouldn’t take a bite, well … welcome to the club. Picky eating is pretty common. And because picky eating among young children is so common, a lot of people have spent a lot of time looking into it. To find some of the best tips to help children expand their food repertoires, we partnered with PediaSure® and asked parents of formerly picky eaters (some of which also happen to be nutrition, food and feeding experts) for their advice:

1. Let young children play with their food. Melanie Potock, a pediatric feeding specialist and co-author of Raising A Healthy, Happy Eater, suggests helping little kids who are picky get more comfortable with food by letting them play with it. Yes, let them touch it, smell it and squish it. While it may go against what we’ve been taught, food exploration isn’t about etiquette. “Learning to be an adventurous eater takes time,” said Potock, who allowed her own previously picky eater to play with food. “For the hesitant eater, this may be where a child needs to start.”

2. Use spices and dipping sauces. Stacey Hudson, a communications specialist at Georgia Regents University, brought as many low-sodium “flavor shakers” (spices) as she could find to the kitchen, from crunchy, nutty Japanese furikake to tangy Tajín fruit seasoning from Mexico. She also started offering dips -- like tzatziki and satay sauce -- with many meals. “It was fun for [my daughter] to be in control, and while she did discover some kooky combinations, she also started getting excited about trying and cooking new things,” said Hudson.

3. Make grocery shopping a family affair. Let children pick out one fruit and one vegetable and let them decide how they want to eat it. Hudson, whose daughter ate mostly “brown or white” foods when she was younger, attempted this -- and it worked. “She has tried just about everything now,” Hudson said. “We discovered that she loves vegetables most when they're roasted in the oven -- cubed beets, broccoli, asparagus, green beans, cubed sweet potatoes, parsnips, cauliflower and more.”

4. Offer variety. Danielle Faust, a mother of two and blogger at OKDani.com, said that when she stopped acting like a “dinner dictator” and began presenting her picky son with several items on his plate at mealtime, he in turn became a “good” eater. “Being picky was really him just trying to exert a little control,” Faust said.

5. Learning to eat well is a marathon, not a sprint. The goal of each meal should not be to get as much food into your picky child’s mouth -- and stomach -- as possible. “The purpose of the food’s presence on a child’s plate is to see it, smell it, touch it, hear it crunch and, perhaps, taste it,” said Melanie Potock. “So if the best he can do is pick it up and chat with you about the properties of green beans, then hurray! That’s never a waste, because he’s learning about a new food.”

6. Vary the way you prepare food. Sometimes it’s not what you offer, it’s how you offer it. “My kids didn't eat cooked cauliflower [unless] you melted cheese over it,” said Gene McMurtry, a father of seven and a registered dietitian. “They didn't like cooked carrots but liked them raw or cooked with a mint tea bag, butter and brown sugar. One wouldn't eat cooked spinach, but would eat handfuls raw.”

7. Cook once. “Do not make a special meal just for the picky eater,” advised Karen Owoc, a nutrition expert and mother of two teenage boys who has been there and done that. “This will create stress, resentment, and extra work for you and puts your child in control.”

8. Offer new foods … until they’re old foods. Christen Cooper, a nutritionist who focuses on young children’s food choices (and a mother who won over her own picky kids), said, “Researchers believe that it can take anywhere from a handful to 20 exposures to an unfamiliar food to gain children's acceptance.” And, no, a food introduced for the 20th time isn’t really considered “new” anymore. But isn’t that the point?

9. Have fun with food and let kids help in the kitchen. Play music. Dance. Let kids get their hands in the food and get them cooking. “They will want to try their own creations,” said Teri Gault of The Grocery Game®, a grandmother who has helped her children, nieces and nephews become more adventurous eaters. Even Gault’s 15-month-old granddaughter gets to try her hand at cutting tofu, cooked vegetables and other soft foods with a plastic, non-serrated knife.

10. Garden with your kids. Sari Davidson, a mother of two and founder of BooginHead®, said, “We helped our picky eaters by planting a garden with our kids. Kids love digging in the dirt, planting seeds, picking ripe fruits and vegetables, and washing them. Our kiddos were more interested in eating what they helped to grow.”

11. Take the pressure off ... yourself. When your child refuses to eat or won’t eat much, it could be that he or she isn’t thrilled with the food selection or just may not be hungry, explained Julie Stubblefield of Fit Mom Revolution. Her children used to eat very “basic” foods but now eat a variety of fruits and vegetables. Either way, try not to worry, Stubblefield said, because “your child will have another chance to eat later in the day at an appropriate meal or snack time.”

12. And take the pressure off … your kids. Food shouldn’t be a fight. Take a deep breath and try to stay calm when you’re talking about eating and food choices with your children. Keep in mind the big picture and avoid raising the stakes. “Don’t punish or reward your children with food,” Stubblefield said.

Be patient. Acquiring new tastes and eating habits takes time. Until then, make sure your child is getting all the nutrients he or she needs. PediaSure® Grow & Gain is a great way to provide them with complete, balanced nutrition and has kid approved taste!