"Mind hunger" is that feeling you get when you experience an emotion that you've been fixing with food. That's the one you've probably been responding to without even realizing it. For example, if you typically eat when you're stressed at work, then the next time the boss yells at you, you might experience a twinge of hunger, urging you to stop by the vending machine on the way back to your desk. It's not that your body actually needs food in order to continue functioning in that moment; instead, you have inadvertently trained your brain to signal you to eat under certain circumstances. It's a physical response to an emotional need. Sometimes, you might even convince yourself that you're experiencing hunger, when you're really experiencing a trigger-induced craving.

Regain a normal, healthy perspective on when and how much to eat, with this Hunger and Fullness Scale.

Here are seven tricks you can use to combat fake hunger and cravings. Use them, or let them inspire you to come up with new ones that work for you.

1. Slow down and chew each bite for 30 seconds.
Studies indicate that obese people ingest their food quicker and chew their food less than slender people. This is certainly something I have observed with my overweight patients as well. Are you guilty of taking enormous bites, chewing the food barely enough to swallow it, and then immediately going for the next bite? I assure you, there is no reward for eating the fastest or the most food in one sitting.

From now on, I want you to make a conscious effort to slow down, take much smaller bites (use a salad fork instead of a dinner fork to make it easier), and spend an entire 30 seconds chewing each bite. Research shows that the extra chewing can actually lower your level of the "hunger hormone," gherkin, and boost your level of the appetite-suppressing hormone, cholecystokinin. That's right; you can actually create a physiological response in your body that will keep you from overeating, all by slowing down and chewing longer.

You Probably Won't Lose Weight Without First Doing This

2. Turn off the screens.
You might think that your smartphone or tablet is your best friend, but did you know it could be causing you to eat more? That's right — a recent study published by the American Academy of Sleep Medicine found that people who were exposed to the type of blue light emitted by this kind of screen before and during an evening meal experienced an acute increase in hunger and insulin resistance. And that's not all; this blue light has also been shown to decrease overall sleepiness, and if you mess with your sleep patterns, you're setting yourself up for even more cases of the munchies the next day.

So switch off your e-reader or smartphone near mealtime or bedtime. If reading helps you wind down, opt instead for a good, old-fashioned hardcover or paperback book.

3. Revamp your sleep.
Catching proper zzz's is a vital aspect to weight loss, especially when you consider one randomized sleep study recently published in the American Journal of Clinical Nutrition, which showed that people who sleep less than seven hours per night are predisposed to overeating. In fact, these sleep-deprived study participants consumed an average of nearly 300 calories more per day than those who got enough sleep, and many of those extra calories came from saturated fat. So, make it a priority to get within the ideal range of seven to nine hours of sleep per night.

How To Splurge Without Derailing Your Weight Loss

4. Drink the right stuff.
Sometimes when we think we feel hungry, we're actually confusing the signal for thirst with hunger, so it's a smart idea to try drinking a cup of water before reaching for something to eat. Plus, developing research suggests that water may help increase thermogenesis, as scientists observed in one particular study. If you're not a big water drinker, jazz it up with a squeeze of lemon or go for the sparkling variety.

Because you typically brush your teeth at times of the day when you won't be eating, your brain has an association between minty, fresh breath and non-eating.

8 Foods That Could Actually Make You Feel Hungrier

6. Call a supporter.
Rely on the people to whom you are accountable. Call, text, or email any or all of them for encouragement in the moments that you need it. That's what they're there for!

7. Accomplish a task.
You probably know the times of day when you tend to have weak moments — it could be late at night after the kids go to bed, or maybe it's mid-afternoon or right after work. Prepare for those impulse moments, which most of us experience from four to seven times a day, by having a list of quick tasks you could accomplish instead of giving in and eating. Think about it; there's always a bill to pay, laundry to fold, a car to wash, or an errand to run. Or you could even burn a few extra calories by doing 30 seconds of lunges or jumping jacks. As your concentration shifts to the task at hand, it will move away from thoughts of food. Have some foresight and plan incompatible activities (something you can't do while eating) for those times of day.

PHOTO GALLERY
The Worst Foods to Eat at Holiday Parties
Download
Calling all HuffPost superfans!
Sign up for membership to become a founding member and help shape HuffPost's next chapter
Join HuffPost 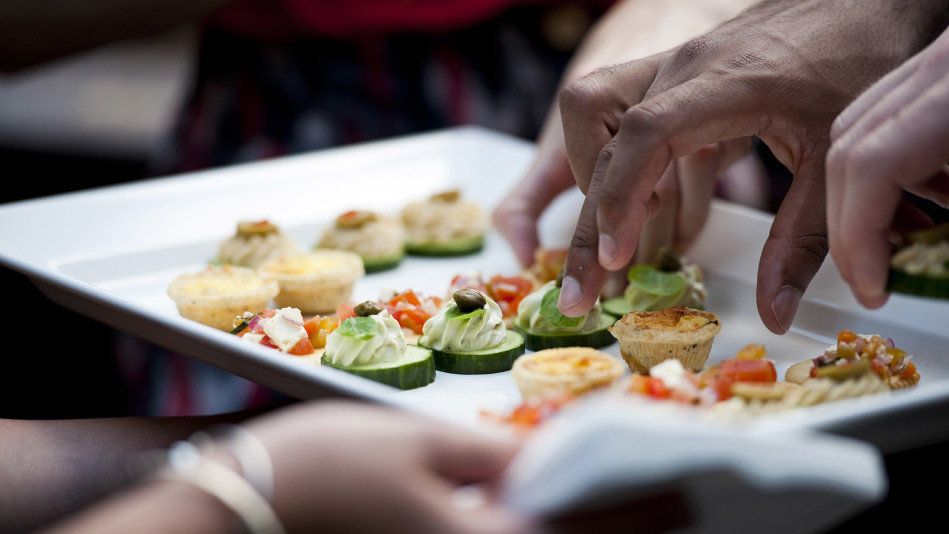 1 / 3
The Passed-Apps Party
<strong>What You Already Know to Avoid</strong> <br>- <i>Pigs in a blanket</i>: Just one can have 100 calories, and we envy your willpower if you can stop at just one. <br><br>- <i>Crab cakes</i>: Preparation makes the difference here, and it can range from baked (OK to snack on sparingly) to fried (avoid). <br><br>- <i>Fried cheese balls</i>: The name says all you need to know about how nutritious they are. <br><br>- <i>Cheese straws</i>: Delicious and addictive. The puff pastry alone can be upwards of 100 calories per straw -- plus, the cheese. <br><br><strong>But Be Careful With These Too</strong> <br>- <i>Buffalo chicken bites</i>: Buffalo-everything is big right now, so you'll probably see some creative takes on the trend come holiday time. The chicken and hot sauce that make these classic bites "buffalo" are fine -- it's the breading and frying that are the problem. Baked versions are a healthier choice. Skip the blue cheese dip either way. <br><br>- <i>Potato pancakes</i>: They're high-calorie because they're fried in oil. Same goes for other veggie-fied takes on pancakes, like zucchini fritters. <br><br><strong>Fair Game</strong> <br>- <i>Caprese bites</i>: Fresh mozzarella is one of your best cheese options, says Jackie Topol, RD, MS, clinical dietician at New York-Presbyterian/Weill Cornell and a culinary nutritionist, because it's lower in fat than other cheeses (just over 6 grams for 1 ounce of whole-milk mozzarella, compared with almost 9.5 grams for the same amount of cheddar) and has a high water content. <br><br>- <i>Deviled eggs</i>: Don't be put off by the mayonnaise. "Eggs are high in protein, so half of a deviled egg can help fill you up a bit," says Stephanie Middleberg, RD, MS, founder of Middleberg Nutrition in New York. <br><br>- <i>Bruschetta</i>: You're unlikely to binge on these bread bites because the crustiness gives you a sense of fullness, says Middleberg. Plus, they're topped with fresh herbs and fresh tomatoes, an excellent source of the antioxidant lycopene. <br><br>- <i>Sliders</i>: Each one will run you about 110 calories, says Middleberg, but they're heartier than a pig in a blanket so you'll feel more satisfied with just one. A 3-ounce patty will also give you almost 13 percent of your recommended daily intake of iron. Remove the top bun for a lower-calorie open-faced option.
Daniel Sheehan Photographers