It started with a conversation between Dallas-based yoga instructor Trina Hall and her best friend.

"She was crying over the phone, lamenting the fact that she didn't want to be known as the 'fat' yoga teacher," Hall told the Huffington Post. "I felt empathy for her and what she was going through ... But it triggered me in a personal way."

Hall decided to find out why she had such a visceral reaction to her friend's comment, convinced that weight had nothing to do with her value. Without telling her friend, Hall let go of all dietary restrictions from March to July of 2013 "to show her, and show myself, that it's not about the physical. That it's got to be about something else. But I found something completely different throughout the process."

Hall realized that the people in her life truly didn't care how much she weighed -- but that she did. She told HuffPost:

The people who didn't know, who were just with me in my life -- there was no difference that I could tell in the way that they treated me. The difference came in my own perceptions of myself, and I began to treat myself differently. I was very judgmental, and I would look in the mirror and critique myself... I would pick apart my body. Instead of looking at the whole of my body, I would look at different parts and analyze what's wrong with them.

These new insecurities drove Hall to cover up her body more than she previously would have. In a Jul. 30 post on her personal blog, Hall explained how her self-esteem suffered:

The stories I made up about what people thought of me were changing and I was emotionally affected. Suddenly, my self-worth was proving to be connected to how good I looked wearing spandex –- something I completely denied giving a sh*t about before this experiment –- and that pissed me off. Guilt from eating foods I typically considered bad for me were constant companions in my thoughts. Shame did cameo appearances in my mind’s movie reel daily.

Hall also found that her weight gain affected her ability to practice and teach yoga. She experienced trouble with stamina, certain poses and breath control -- to the point where she dramatically cut down on demonstrating poses in her classes and would instead walk around the room assisting her students. This also affected her self-esteem: "It made everything that was physical more challenging. It made it harder."

Hall's intention was not to make a statement about the lifestyles or eating habits of overweight people, but rather to see how changing her own weight would affect how people felt about her. More importantly, acknowledging her feelings of shame and guilt allowed Hall to process how she thought about herself and what gave her value. In her Jul. 30 blog post, Hall revealed: "My most shocking discovery through the process is that I’m afraid of not being loved. I noticed the self-talk was that my beauty is only on the surface."

This project allowed Hall to change that conversation in her own head.

The next step? "I want to empower people to love their bodies... if it's going to start somewhere, it has to start within."

Now that's a mission we can believe in. 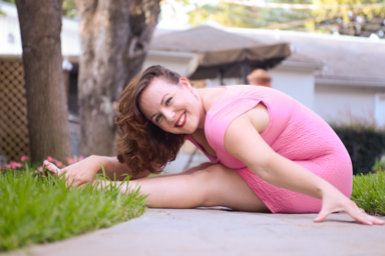