It's rather unusual for me to talk about an exhibition that hasn't officially opened yet. But over the last few months, I had several visits with Enrique Martínez Celaya in his new Culver City studio, and watched him working on the paintings and sculptures for his upcoming show at LA Louver gallery. Titled "Lone Star," the show opens this coming Thursday, and we are all invited to attend the evening reception (7-9pm). 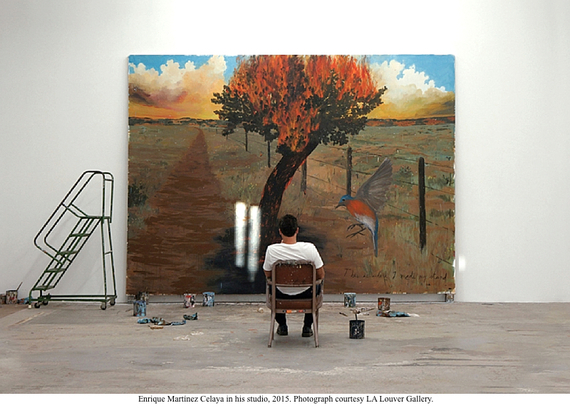 It's a rare case that both floors of LA Louver gallery are dedicated to show the works of one single artist, but dramatic, mysterious, and haunting artworks by Enrique do need a lot of room to breathe. Besides, he is a very prolific artist, and to give us a proper experience of his mind and vision, the gallery chose to give visitors a particularly close encounter with his art.

Enrique's monumental paintings and drawings are difficult to describe or to explain; one needs to slow down and stand still in front of them to be able to hear their voices. None of these works attempt to please; perfection is not the artist's goal. We see his energetic, free brushstrokes, and the impression we get from them is not of carefully detailed and completed images, but of raw and spontaneous storytelling. And it is up to us viewers to step into and finish these stories. 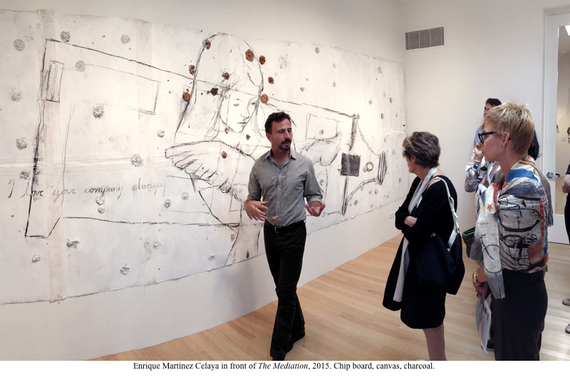 Last Saturday, when Enrique was finalizing the installation of his show, he invited me to drop by for a walk through. I brought along a small group of art aficionados and we had a ball. The artist told us about Cuba, where he was born and which his family left when he was still a child. Enrique spent most of his childhood in Spain and Puerto Rico. Then, upon settling in the United States, he started studying Applied & Engineering Physics at Cornell University, and pursued a degree in Quantum Electronics at UC Berkeley. But eventually, he woke up and smelled the coffee, or as I should probably say, he woke to the smell of paint fumes, which subsequently led him to UC Santa Barbara for his MFA. 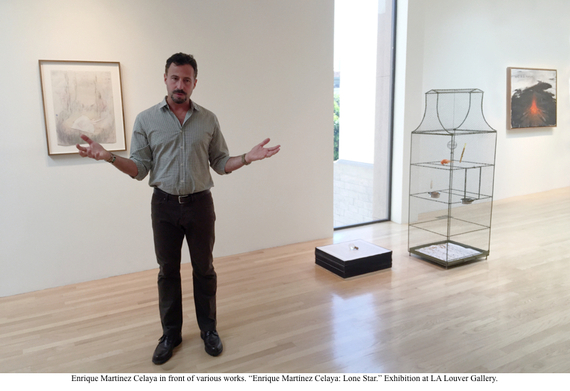 In spite of multiple gallery and museum shows here in the United States and in Europe, Enrique -after 10 years of living in Miami --returned with his family to LA, once again reminding us that this city of ours has truly become a cultural magnet, attracting many important artists to work and live here. The current exhibition is Enrique's fourth with LA Louver gallery, and it is probably the most autobiographical so far. 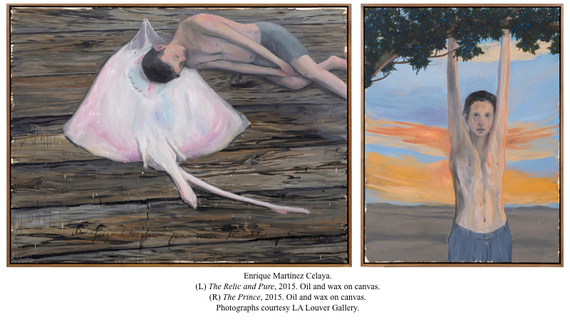 The painting of a young boy swinging off a tree branch, or another painting of the same boy napping, with his head resting on a stingray, are not necessarily portraits of the young artist, but nevertheless act as windows into his world. In conversation with Enrique, you often hear him mention fairy tales by the Brother's Grimm; he also speaks about Melville's Moby Dick. And though I am not completely up to speed in following his remarks about Schopenhauer's philosophy, I am delighted to learn from Enrique about his love for Doctor Zhivago by Boris Pasternak, the Russian writer who got a Nobel Prize for this novel in 1958, but did not leave the Soviet Union to accept the prize for fear of not being allowed to return home. 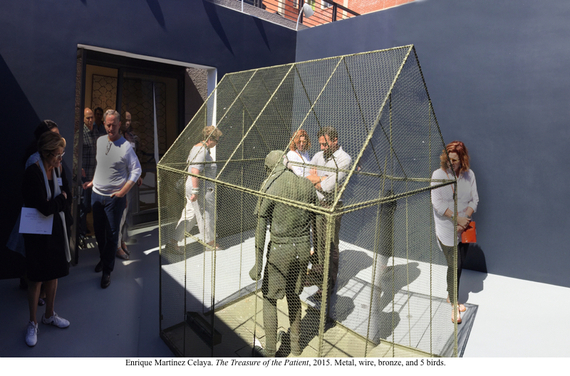 Entering a small, dark gallery room with walls covered with mirrors, one sees a life-size bronze sculpture of the boy standing in a pool of water. You hear the sound of the boy's tears slowly hitting the water at his feet. Don't ask for whom the boy cries, he cries for thee. And, of course, it is impossible to ignore the live birds inside large cages; they tweet and chirp and, on occasion, unceremoniously leave drops of you-know-what while perched atop Enrique Martínez Celaya's bronze sculptures.