Photographer Troi Anderson was interested in Vodou before he ever visited Haiti. But attending a ritual in person was nothing short of a transformative experience.

“The absolute immediateness of that place,” he described to The Huffington Post, “the fact that you cannot isolate yourself in that country, that everything happens in a split second and things are occurring all around you like a kaleidoscope of sound and light. There is a power in Haiti, like a supernova. It is pure light there.”

Vodou is often misunderstood by Westerners who come to it through pop culture or folklore, where it is often tinged with racist stereotypes and legends. In reality, there are typically no dolls, no animal sacrifices, no dark magic. Simply speaking, Vodou rituals consist of music, rhythm, theater and dance, performed with such acute intensity that bodily movements access something transcendent and divine. Vodou practitioners frequently aim to experience divine possession, as a spirit flows through their physical form, achieving ecstasy through the tools of everyday life.

As the saying goes, Haiti is “70 percent Catholic, 30 percent Protestant, and 100 percent Vodou.” The spiritual system, in part responsible for the Haitian Revolution and liberation of Haitian people from French colonial rule in the early 1800s, was born within a structure of institutionalized slavery, in which Haitian people were forced into inhuman amounts of labor in the cane plantations, treated virtually as cattle.

“Vodou is the response to that,” Ira Lowenthal, an anthropologist, Vodou arts collector, and former aid worker, explained in an interview with The Guardian. “Vodou says ‘No, I’m not a cow. Cows cannot dance, cows do not sing. Cows cannot become God. Not only am I a human being ― I’m considerably more human than you. Watch me create divinity in this world you have given me that is so ugly and so hard. Watch me become God in front of your eyes.’”

Today, Haitian life remains plagued by pain and injustice. A cholera outbreak has killed over 10,000 Haitians over the past six years, believed to have been imported by United Nations peacekeepers. Women and individuals with disabilities are subjected to horrific violence, while Haitian migrants struggle to find the food and shelter necessary to live. Voudou provides a way to process and transcend the struggles of daily life through music and dance. Vodou practitioners physically create a more beautiful reality.

“Haiti contains a profoundly religious mind because it exists in a wasteland,” Anderson explained. “This necessitates an inner strength that is unknown in the economically privileged countries. Direct, unfiltered communication with the unconscious, what the vodouisant calls ‘esprit’ or the ‘mysteres’, acts as a source by which suffering can be translated, released through ritual forms.”

Portland, Oregon-based Anderson has returned to Haiti several times over the past few years, documenting the rituals that move him to such an intense degree. “Creating this sort of photography is different than other works I’ve done because it relies on having an instinctual sense of each other,” he explained. “The actor and the photographer have to have complete trust. If my actions are sincere, than that person, the the performer, would allow me to work with them.”

In his series “Defiant Rite,” Anderson, whose other projects have documented solar eclipses and mud baths, specifically captures Vodou through the physical expressions of people’s faces and bodies. His camera depicts, in sharp detail, bulging eyes, enraptured smirks, bodies flailing with a power that can only be described as otherworldly. There are few props, costumes or notable regalia. The primary spectacle on view is the potential of human spirituality and the potential of divine transcendence through movement.

“These are ancestral movements that are without real explanation,” Anderson said, “except that this urge propels them through the nightmare of history.”

PHOTO GALLERY
A Stunning Look At The Indomitable Women Of Haiti 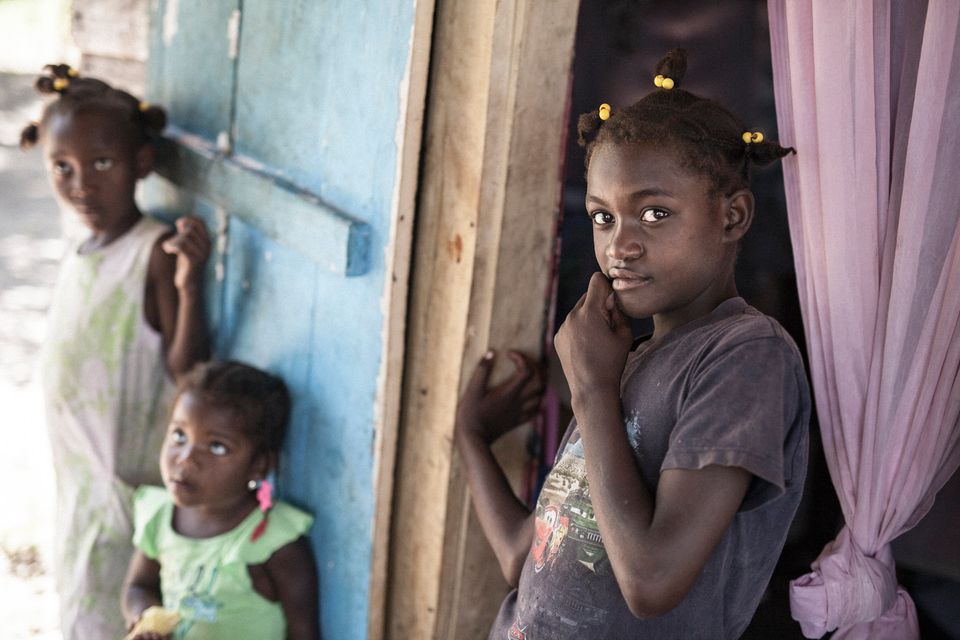