If you like your live theatre thought-provoking, heart-wrenching, and cathartic, then Christine Evans' "Trojan Barbie," directed by Olivia Trevino, and given its West Coast premiere at The Garage Theatre, is for you. Based on Euripides's "The Trojan Women," it introduces Lotte (Rebecca Cherkoss), a London dollmender that ends up in a women-only POW camp that houses the surviving members of the House of Troy's royal family. 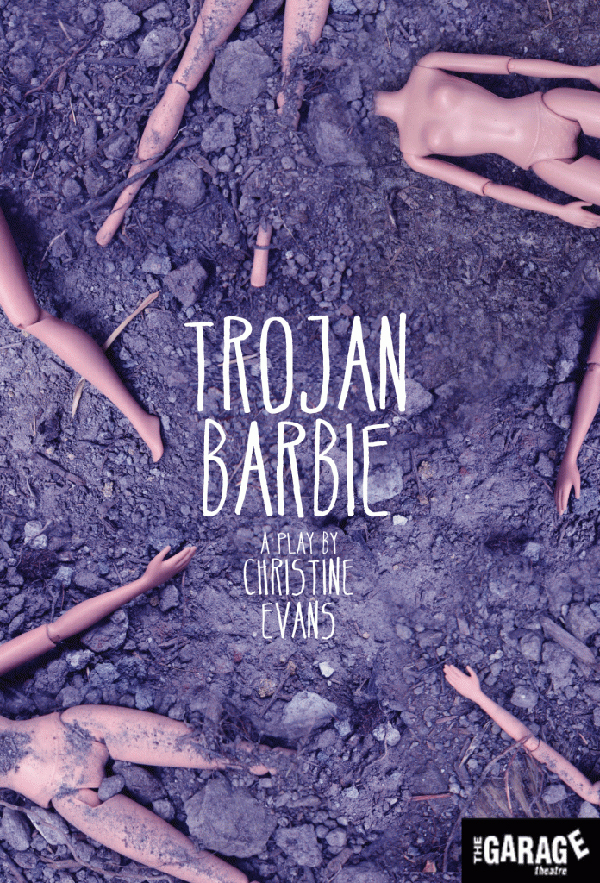 It all seems eerily familiar. The end of hostilities (military ones, at least), a once proud city in ruins, brothers, husbands, and sons dead, ill-intentioned occupation forces, and the uncharted but rancid fates of detained women, don't just resemble recent events in the Middle East, they also recall the aftermath of every war in recorded history. Not that there aren't problems with the production. Despite an intriguing title, a fascinating premise, and stellar performances, the story eludes narrative logic that would have better focused the production and have made a great evening an outstanding one.

Trojan Barbie explodes with spectacle. There's the narrow, claustrophobic stage that situates, at any given time, up to twelve actors. There are the harrowing, breathtaking performances, especially Amy Louise Sebelius's cathartic and memorable Hecuba, the queen of a fallen Troy. There's the story of mayhem, loss, and despair, whose words alone would make you weep. There are the timeless themes. War is hell, especially for the non-combatants, even more especially for the women. War is monumental, tragic, and petty. A 10-year war rife with destruction and a grisly aftermath erupted because a member of the Trojan royal family ran off with a married woman. And finally, War is unfair. Helen of Troy gets aspirin and preferential treatment because she Marilyn Monroe's a member of the occupational force.

The actors' hit each high note of this bottom of hell tragedy. Angry, demented, and helpless, Sebelius's Hecuba is a vortex of despair. She's so out there that she seems not to be up on the stage but somewhere far, far away. Her squalor squares off nicely with Helen's (Emma Fyffe's) breezy and glamorous sense of entitlement, the result of a face-that-launched-a-thousand-ships. A girl's gotta do what a girl's gotta do. Ditto for Polly X's (Bri Price's) innocent, hip, and unrealized cutting edge creativity with Lotte's bland and prim cluelessness.

As compelling a production as it might be, though, we don't know whose story it is. For that reason, it's hard to set your bearings. For all her railing and wailing (and Sebelius's bravura performance), it should be Hecuba's story. Queen and matriarch, she's lost her husband and children, her city, kingdom, and culture. And her freedom. Most of the action in the story either describes some wicked deed perpetrated on her family or else her reaction to said deed.

And yet the story seems more about Lotte, a London dollmender who embarks on a single's cruise called "Tragedy in Troy" (It doesn't take a Cassandra to tell you how that's going to turn out.). Her experience in -- and escape from -- the POW camp should provide outsider insight into the story's meaning as well as advance the story. It does neither. Her relationships with the other women are tangential.

The story's place in time is inconsistent. Message-wise, the story affirms that the past informs the present. From generation to generation, we forget that war is hell for all concerned. But with no clear transition from one century to the other, we can't locate ourselves in time. It shouldn't be important, as the theme is timeless. When the ambiguity muddles the script, though, that's a problem. Does Lotte time travel back to Troy, hundreds of centuries ago? Does the war take place now? It doesn't help that the costumes are both contemporary and ancient. Nor does it help that the characters' names are the same as in Euripides's play.

Were the distinction more clear, Lotte's dolls would provide the story with a solid metaphor. Brainless, with no will of their own, both the Trojans and Greek soldiers are boy dolls. Once innocent playthings, the women of Troy are now disfigured, disjointed, and discarded girl dolls. Tying the story together would be Lotte the dollmender. Articulating the visual would be Polly X's envisioned work of art - a sculpture fabricated from mangled Barbie parts. It's a pity, then, that Lotte's contextless mending of Hecuba's grandson's battered body loses its poignancy and remains just plain weird: what's a doll mender doing putting together a tank-mangled body?

With its spectacular performances as well as from the many "War is..." issues it raises, Trojan Barbie leaves you breathless. But it also leaves you with another, unfortunate message as well: War is confusing.