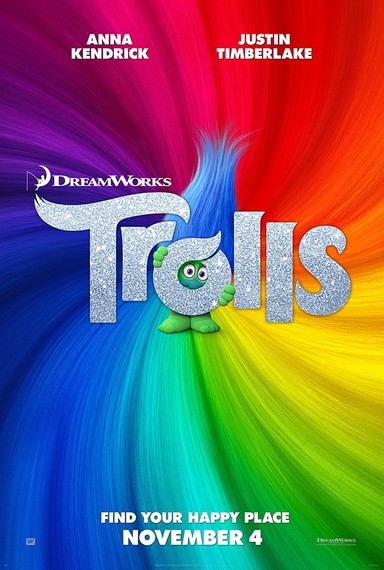 From the creators of Shrek comes the most smart, funny, irreverent animated comedy of the year, DreamWorks' Trolls. Featuring original music from Justin Timberlake, and soon-to-be classic mash-ups of songs from other popular artists, Trolls is a fresh, broad comedy filled with music, heart and hair-raising adventures. From the beginning, Trolls takes you on a vivid colorful, musical journey including the magic of the Trolls and the roughness of the Bergens. The Trolls daily routines - hugging every hour, singing and dancing and living everyday partying is endearing and the messages are life-affirming.
KIDS FIRST! Film Critic Ryan R. comments, "If you didn't know, this movie is a musical. It is fantastic! I love how they turn well-known songs into their own new version of the song by changing the arrangement."
Morgan B. adds, "The animation is very vivid, extraordinarily colorful and detailed which is perfect for little ones who will love the colors and the fun characters in this film. The way everything so detailed, realistic and whimsical makes this film really stand out in a way that appeals to both kids and adults."

See their full reviews below.

I love the new Dreamworks film, Trolls because it is entertaining, has a good message, has a great soundtrack filled with incredible music and is virtually impossible not to like. In this movie, it is 20 years since the Trolls escaped from the Bergens. Bergens are giants compared to Trolls. Meet Poppy (Anna Kendrick) who is going to be queen of the Trolls. She decides to have a party, but Branch (Justin Timberlake) warns them not to make a bunch of noise or their enemies, the Bergens will find them. Poppy doesn't listen and, because of that, the Bergens, capture some of the Trolls. Poppy decides to find and rescue them. Will she save the Trolls or will the Bergens do something to them before she does? You have to see the movie to find out.

I enjoyed watching this movie because I love the music. If you didn't know, this movie is a musical. It is fantastic! I love how they turn well-known songs into their own new version of the song by changing the arrangement. Another reason why I love this movie is because of its cast. The cast's chemistry is evident as you watch the interaction between the characters throughout the film. Anna Kendrick's and Justin Timberlake's performances are fantastic because they take you on an emotional journey and make you feel it. I love how Justin Timberlake's character goes through changes throughout the film and Anna Kendrick's character Poppy is hilarious. She made me laugh a lot. 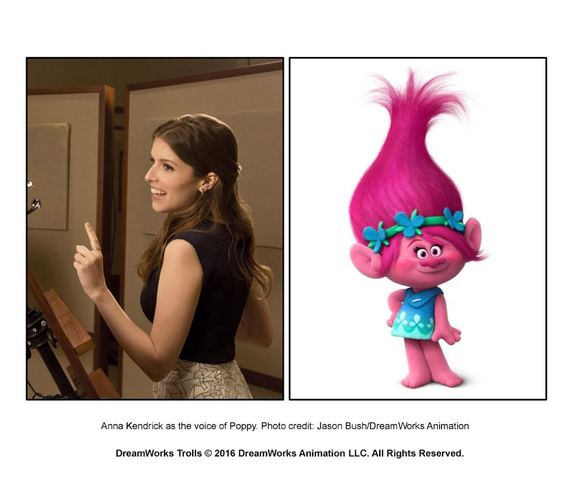 The supporting cast members are superb as well and their characters, in some scenes, steal the show. For instance, Biggie (James Corden) is so hilarious in one scene, but I can't say which one because it would spoil the movie. Also the performances of Gwen Stefani, Russell Brand, Zooey Deschanel and many others will have you laughing as they deliver a bunch of jokes as well.

This film is amazing and has a positive message - "You don't need things or people to be happy. Your happiness lies within yourself and you should be proud of who you are."

I give this film 5 out of 5 stars and recommend it to kids ages 6 to 18. I think adults may like this as well. The Bergens may be a bit scary looking so kids under age 6 might find it too intense. I also recommend this to people who like action, adventure, musicals and family movies. This film comes out November 4, 2016 in theaters nationwide. Make sure to see this movie, because it is worth seeing.

This is a terrific film. The small, adorable and fun Troll dolls are making a comeback in the new feature film Trolls. The cutest ever Trolls play opposite the pessimistic Bergens. These are fun, energetic characters as well as grumpy characters who blend together to make this film perfectly engaging. There are also stupendous songs that make you just get up and out of your seat, singing and dancing.
The animation is very vivid, extraordinarily colorful and detailed which is perfect for the little ones who will love the colors and the fun characters in this film. The way everything so detailed, realistic and whimsical makes this film really stand out in a way that appeals to both kids and adults.

The cast is brilliant especially Poppy (Anna Kendrick) who is the happiest, kindest, sweetest troll of them all. She always see the bright side of things and reminds me of myself when I was younger. Maybe that's why she is my favorite character. Plus, Poppy is an amazing singer just like Branch (Justin Timberlake). 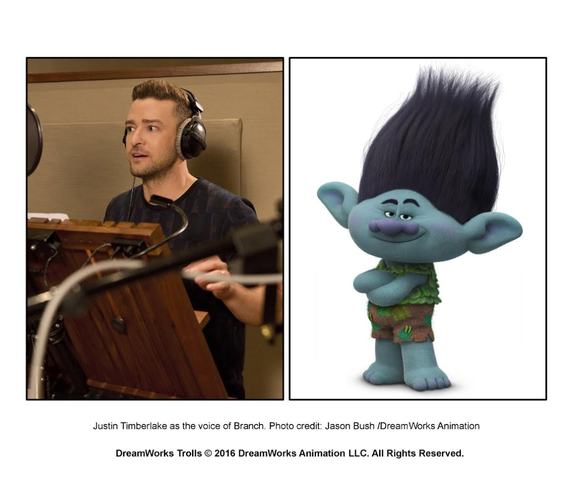 Branch the grumpy, sad troll is also very sarcastic and funny. He is a favorite because of how his smart remarks add a lot of humor to this film. Justin Timberlake, who I recently met, is nothing like his character in real life. He is an absolute sweet heart in person. I got to talk with him recently on the rainbow carpet for Trolls and learned that he loves to sing and dance and he had a splendid time working on this film. He is also the executive music producer for this movie.

Bridget (Zooey Deschanel) is an unhappy scullery maid who is in love with someone. She needs a little help to get him to notice her and hence, the matchmaking begins. Last, there is Chef (Christine Baranski), the villain we all love to hate. She is crazy and frightful. She likes to eat trolls and that keeps the story interesting and intriguing for older kids.

My favorite scene is when Poppy is singing a fun song called "Get Back up Again" while she is almost eaten, stepped on and everything painful and horrible happens. I love this scene because it made me laugh so hard. It makes you want to get out of your seat and sing along with her. I also love the way that she gets back up no matter what, thinks positive and tries her best to help everyone, no matter what happens to her along the way.

I recommend this film for ages 5 to 18 because younger kids will love the fun songs, colorful animation and the silly adorable characters and older kids will love the scary villain and the story line. This is a feel good family friendly movie that parents will enjoy as well. I give this film 5 out of 5 rainbow troll stars. Be sure to check my interviews on the rainbow carpet where you can meet actors who play these characters and learn more secrets. This film comes out November 4 in theaters nationwide so, go check it out. 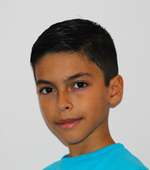 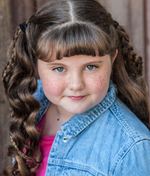