Trophy hunting, or what some call "trophy murder," is a hot button issue. In a recent essay called "Is Trophy Hunting Really Trophy Murder? Intentions and Words Should Matter" I examined some of the reasons why people choose to go out and kill other animals for fun and pleasure, essentially engaging in gratuitous violence. I also wrote about this topic in an earlier essay called "Do Some People Simply Like to Kill Other Animals?" and concluded that some people do, indeed, get pleasure out of killing another animal when they really don't have to do it.

There really is a killing smile: Pleasure smiles are greater when hunters pose with large dangerous corpses

When I wrote the essay asking whether some people simply like to kill other animals for fun, sport, and pleasure, there weren't any data of which I was aware that supported this conclusion. However, now there are data from a detailed study that show that this is the case. In an essay published in Human Dimensions of Wildlife: An International Journal called "Hunting for Trophies: Online Hunting Photographs Reveal Achievement Satisfaction with Large and Dangerous Prey," University of Victoria researchers K. R. Child and C. T. Darimont with the Raincoast Conservation Foundation and Applied Conservation Science Lab conclude, "that the odds of true 'pleasure' smiles are greater when hunters pose: (a) with versus without prey, (b) with large versus small prey and, (c) with carnivores versus herbivores (among older men)." They go on to write, "We emerge with a generalizable achievement-oriented hypothesis to propose that the prospect of displaying large and/or dangerous prey at least in part underlies the behavior of many contemporary hunters." 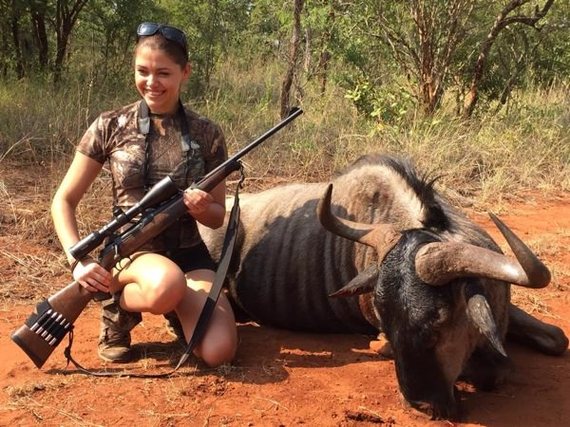 This landmark study has received a great deal of attention in the popular press and you can read more about in an essay by Randy Shore called "Large, dangerous prey evoke most satisfaction from trophy hunters, B.C. study finds" (for which the comments are extremely interesting) and in an essay by Patrick Colvin called "Hunters show 'true smiles' when posing with slain animals: study." Mr. Shore also notes, "boasts that were once shared around the ancestral campfire have moved onto social media, online hunting forums and websites where the researchers were able to find more than 2,500 pictures of hunters posing with prey for their study." In Mr. Colvin's essay, researcher and co-author Chris Darimont is quoted as saying, "you can't fake a pleasure smile, you can't do it on demand" and "what really makes a hunter very happy of course is killing an animal, and not only that but our data tells us that they're quite a bit happier when they kill a large animal versus a small animal of the same species."

All in all, this novel and significant study provides a very unique way to study the motivation of trophy hunters and I look forward to seeing future research that goes more deeply into why people choose to go out and kill animals for fun, sport, and pleasure. Dr. Hope Ferdowsian's short essay called "5 Ways to Stop the Killing" shows just how easy it would be to find other ways to go out and to rewild and enjoy nature without taking another being's life and without spending a lot of money to kill thoroughly innocent victims because it makes someone smile.

Needless to say, the topic of trophy hunting isn't going to go away anytime soon and it's essential to learn why people engage in it if we're ever going to stop it. Please stay tuned for more research on this most timely topic.