An interview with Venerable Pannavati about her Christian-Buddhist path, why there are not more Blacks in Buddhism, and her push for girls, women, and "Untouchables."

Ven. Dr. Pannavati, a former Christian pastor, is co-founder of Embracing-Simplicity Hermitage in Hendersonville, NC. A black, female Buddhist monk ordained in the Theravada and Mahayana traditions with Vajrayana empowerments and transmission from Roshi Bernie Glassman of Zen Peacemakers, she is both contemplative and empowered for compassionate service. She just returned from South India where she established the first nunnery for "Untouchables," and she told me about the urgent need for support for girls and women.

Michaela Haas: I regret that I didn't include any women of color in Dakini Power. One obvious reason is that there are so few, but there are some! Do you have an explanation why are there so few African-American women in the Buddhist communities?

Ven. Pannavati: I do. First of all, most communities (sanghas) aren't that inviting to African-Americans. It's not deliberate, just conditioning. This is a reflection of our broader society. Western meditation was really a sort of white, elite pastime. We people of color weren't there in the beginning. I remember when I first started going to centers -- one in particular. I came by myself at first. They were happy. I was a novelty. We call it being a "token." I began to bring friends. By our fourth or fifth visit, they gave me a cassette, saying, "You know, y'all don't have to come all this way. We made a tape so you can listen in the comfort of your own home!" True story! We were quiet, clean, on time -- just black. And, of course I don't need to tell you about the problems we are having with communities all across the country. Trouble in paradise. How can it be different? The people that show up in here come from out there. They are looking for something but their mindset is not transformed. We don't want to admit some things are just plain wrong or face the fact that without justice, there will be no peace.

White sangha members are always asking me how to get more blacks in. I ask them, "How many blacks do you invite to your home?" On the other hand, blacks are tired of being marginalized and they can be quick to let you know! The Buddha gave trainings on non-conflict, though. We should study those suttas and practice the inward cultivation he prescribed. Then, attachment to erroneous views and habitual patterns of both superiority and inferiority will fall away.

Do you have a lot of black students?

No. Our sangha is all white. I live in a de facto segregated, southern town where only two percent of the population is black. So, it's really a reflection of our community, also of mistrust. I was once told by a black resident, "Anybody who has this many white friends can't be trusted."

When I first started receiving speaking invitations I was only invited to speak to the people of color (POC) groups. I would say, "Call me back when you're ready to have me speak to your whole sangha. I'm not a black Dharma teacher. I am a Dharma teacher." We have all of these POC sanghas, because they don't feel emotionally safe. And the whites feel emotionally and physically safer being separate, so how is anything going to change? We have to stay together until we overcome our conditioning through practice. That's the work. It's going to take time. That's why Buddha said friendship in the Dharma is the whole of spiritual life. 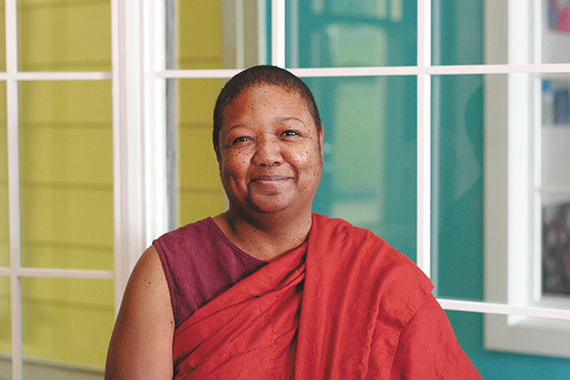 You are one of the heroes of engaged Buddhism in America.

Really? Okay, it's like this: When everything is good, we can sit on our cushions. When there are things to take care of, we should get up and do it. Even Buddha said it is hard for a person to make progress when he is hungry. Western Buddhists need to learn to reach before they teach. Easterners for the most part already get this. It's not a mental exercise for them.

You are currently looking for resources to build a school and provide water and toilets in India. How did you get involved in that?

A man from India emailed me and asked if I would come and help. I asked, "How did you find me?" And he said, "Well, I googled 'black nun' and you were the only one who came up. You've been through the civil rights movement, and Dalits ("Untouchables") need people who really understand what systemic oppression does to the psyche of people." So, I did a Bearing Witness retreat in Tamil Nadu with Roshi Bernie and a couple of the Peacemakers. We didn't know that much about the degradation of the Untouchables as a class of people and the atrocities committed against them. They are considered non-human, 240 million people! Just google "Dalit atrocities" for a quick education. This particular Dalit group asked me to offer the Buddhist precepts and to teach the villagers Dharma. They specifically wanted a bhikkhuni, because they used to be a matriarchal society. But when I got there, I realized, these people don't even have water. Let's start with water first and then we'll do some teachings. We've completed one huge well and planted a surrounding forest with a garden of fruit trees, vegetables and medicinal herbs for the village widows. It will serve 3,000 people. We are nearing completion on a 2nd well in an adjacent village, and have begun installing outdoor toilets because right now, they defecate in the street, field or go behind a bush. Many of their women and girls are raped when they go out at night to relieve themselves. It's a shame. Upper caste members do not generally pay Dalits in rupees for menial work performed. Rather, they give them leftovers or a hand of rice. So, who can afford a toilet?

Few people in the West realize how crucial that is.

Yes. It is a huge safety issue. Malnutrition and senseless death due to poor sanitation is a problem, so we have a counselor teaching the villagers about sanitation now that water and toilets are arriving! Once the villagers saw the first toilets going in, they became excited and we got requests immediately from over 100 villagers asking for toilets. We can do it for only $40 a toilet! We hope to install them in March when we return to begin phase I of the school project. I need to raise $100,000 dollars for the first phase. We've saved a lot by buying a brick-making machine. We're having villagers trained to make and lay the bricks over the next two months and there is plenty of the right soil in the village to make them. That's an enormous project saving. The equipment and trained bricklayers can create revenue for the village and help pay salaries for teachers. Each trip, 12-15 people go with me to touch and be touched by these beautiful people. If people visit my website and click on Missions, they can see what we're doing and donate there or sign up to go with me in March for two weeks. We're almost at the end of the year, but we need to really make a push for support. Sulak Sivaraksa, co-founder of the International Network of Engaged Buddhists said, "Buddhism is not concerned just with private destiny, but with the lives and consciousness of all beings. Any attempt to understand Buddhism apart from its social dimension is fundamentally a mistake. Until Western Buddhists understand this, their embrace of Buddhism will not help very much in the effort to bring about meaningful social change ... or in their struggle to transform their ego." I agree. One of our 'witnesses,' a business owner from Charlotte, in shock upon seeing the conditions, said: "It's unbelievable... you can't make this s*** up." We all need to help.