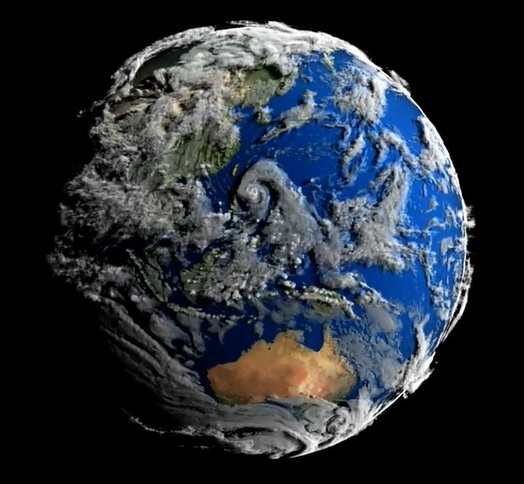 We now stand at a crossroads. However unintentional, humans are responsible for climate change. It is time we own up to that and deal with the problem in earnest. For what we do today will forever determine our future trajectory. Could this crisis be the impetus that moves us to the next stage of civilization or to extinction?

Make no mistake. The dawn of the Anthropocene, a new geologic age of our own making, is upon us. This means that our imprint on this planet is so great that we have changed it for all time, to forever be recorded in the geologic record.

Humans are the only species to have dug miles into the ground. We have decimated entire landscapes, altered ocean chemistry and changed the atmosphere so rapidly and to such an extent that today's earth is completely different from the one which permitted the rise of civilization. Since the 1950s, the rate at which we are changing earth systems is nothing short of astounding in its exponential progression, so much so that this is called "The Great Acceleration."

Bottom line: Burning fossil fuels is altering the earth's climate by affecting the keystone, or central cycle, of the biosphere, the carbon cycle. This is the cycle by which all life on the planet connects the light from sun to the make up of our atmosphere, the chemical balance of the oceans, and the very nature of earth's geology. The carbon cycle begins with the exchange between respiration of all life and photosynthesis. It's the cycle of life flowing through the earth. And, when left to itself, balances out over time to reach an equilibrium that determines the nature of what life will look like for any particular geologic age. So, what we do to the earth, we do to ourselves.

The advent of the Industrial Revolution and the coinciding economic philosophies that grew out of the late 18th century marked a turning point in man's relationship with the earth. Before that, the earth's climate had been relatively stable. But, that balance was shattered by a burgeoning machine age driven by free-market delusions of boundless expanse and the arrogant notion of the primacy of market forces. Consumption ... free-market economics ... mechanized extraction of earth's resources ... This is the modus operandi of a global economic system which ignores the glaring reality that the essence of our own being is derivative of all the natural cycles vital for maintaining planet earth.

Nature trumps the economy. The economy is a human invention which is subject to the same laws of nature we are. In the final analysis, it's the carbon cycle, stupid! For, without it, no economy could exist. So, it is stupid and arrogant to think we can continue to perturb natural habitats using these old ideals and old methods. For in so doing, we assure our own demise.

So, at its core, anthropogenic climate change is the product of a disrupted carbon cycle resulting in a runaway greenhouse effect that's culminating in a series of acute and chronic natural disasters. And, this threatens the very foundation of human civilization. It's the existential threat of our time where failure to make the right decisions and to decisively act on them may mark the end of the human race.

Plans of action for reducing our carbon footprint via transition of our global energy infrastructure, elimination of senseless waste and exploitation, and minimizing or reversing land-use change will make a big difference toward giving the earth some room to heal itself. These pragmatic objectives are based in empirical facts and, strategies toward that end will hopefully be ratified in Paris this December.

But, will that be enough? There's certainly good reason to believe that lack of action to curb our combustion-driven exploitation of "Mother Earth" has built enough momentum such that calamity is inevitable. How that will play out and what the collective reaction of the human race will be, remains to be seen.

This biological morphing of carbon through the biosphere is the embodiment of energy-matter transformation that's all too reminiscent of Einstein's famous equation, E=mc². Because, that also describes metabolism. Think about it. This formula is just as much about transformation as relative motion. And, metabolism is the epitome of energy-matter transformation. Except it's metabolism on a global scale. The sun provides the light to kick-start the whole process which, if allowed to reach equilibrium, becomes a self-sustaining cycle.

Dramatic advances in solar technology and solid state storage devices are making it possible to transform our energy grid from a centralized to a web-based paradigm. And, novel schemes combining solar power with the absorption of greenhouse gases and the alleviation water acidity have been proven.

For example, there are workable prototypes of microbial wastewater treatment that employ solar powered electrolysis to convert ambient CO2 to basic mineral salts. Salts that are actually byproducts of natural carbonate rock weathering. So, they could be used to mimic the accelerated weathering of limestone, which is potentially useful for treating ocean acidity. This is but one example of the potential to combine energy generation with environmental remediation by absorbing and converting CO2 into other naturally occurring organic molecules useful to other species and habitats. It's not an overnight fix or an attempt to geoengineer our environment. But, an example of how we might retool our habitats by merging our carbon footprint with that of earth systems to give nature some breathing room.

Consequently, there is great potential for blending energy generation into the natural scheme of global earth systems that don't employ geoengineering. For, the gold standard of human habitation of "Mother Earth" is our ability to harmoniously merge with surrounding ecosystems and so, be noninvasive and flexible. In this way we can begin to move forward in the next century. Something has to change; for, we cannot sustain our current path.

Retooling our footprint starts with our cities. As our largest energy sinks and heat sources, these "urban heat islands" affect local weather patterns due to the larger heat-absorptive capacity of buildings and roads. So, the first plan of action would be to explore ways to reverse that trend.

Research on infrared radiant materials intended for the design of roads and buildings is now under way and shows great promise. If these techniques are combined with methods to extract and use excess infrared emissions as an energy source while directing the rest out into space, there may be ways to use our population centers as heat shunts toward space. This may be low-hanging fruit; for, manipulating waves of energy verses bulk matter is exponentially easier. And, by borrowing from the paradigm of wireless communications it may be possible to use our cities as relay centers to transmit and/or relay excess infrared radiation back out into space.

These are ways we might attempt to use our habitats to relieve some of the negative symptoms of climate change. And, metropolitan areas represent a considerable enough land mass to explore actual manipulation of microclimates. Although not a cure, it might allow us to sustain our existence as we weather the impending difficulties of an altered global system.

Much hope rests on the outcome of COP21 in Paris this December. 2015 has been named by the United Nations as "The International Year of Light and Light-based Technologies" and by no coincidence this year's summit will be held in "The City of Light."

I can only hope that the potential of manipulating the infrared spectrum as well as the other innovative ideas, briefly touched on in this article, will be brought to the fore. It would be all too fitting if they were to explore and address new ways in which electromagnetism may be used as a remediating factor to address climate change.