This past Tuesday, the folks at Reuters relayed a story from The Smoking Gun concerning a South Carolina driver who was pulled over and cited by a sheriff's deputy for displaying from his truck's bumper a pair of hanging truck nuts, the now fairly familiar product that adorns many a truck driven by many a man with a wife far more permissive than mine.

According to the deputy's report, "The vehicle was displaying an obscene object from the rear bumper. The object was a pair of large fleshy testicles."

Hey! I'll grant you a pair of balls is ugly as all get-out, but obscene? I take umbrage.

That's my own personal issue. On with the story. 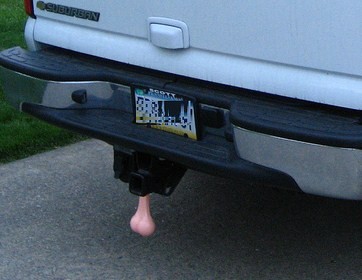 Evidently, under South Carolina law any vehicle that displays "any sticker, decal, emblem or other device containing obscene or indecent words, photographs or depictions," violates the law to the extent that it "describes, in a patently offensive way, as determined by comtemporary community standards... parts of the human body" and "lacks serious literary, artistic, political or scientific value." So if you want to drive around South Carolina with a copy of Gray's Anatomy in your rear window, open to the testicle section, that might be o.k. Truck nuts, however, are verboten.

I'll remind those of y'all who might be casual fans of college sports that the University of South Carolina's mascot is a gamecock and that at home football games one is regularly exposed to the unison cheer of U.S.C. fans, "Gooooooo Cocks!" Nothing offensive about that.

Here's the part of the story I guffawed at. The deputy's report includes the following:

"The item was flesh colored, anatomically correct, approximately the size of a softball, and in clear view of the public."

Hang on -- anatomically correct AND the size of a softball? What are you feeding your kids in South Carolina?! I've been the proud owner of a pair of trouser nuts my whole life. I've been in locker rooms and stood at urinals next to men of all ages, races, statures and dispositions and the number of softball size testicles I've seen I can count on one hand, minus the thumb. No fooling. I don't care what color they are, a pair of softball-sized jewels draped from a trailer hitch might be offensive, but they most certainly are not anatomically correct. Besides, if they were anatomically correct they'd have shot up inside the chassis when the truck hit a pothole.

In other testicular vehicular news, the putative obscenity of TruckNutz (one of a few competing brands in the rear-bumper-fake-ball industry) will be tested in court by one Virginia Tice, a 65-year-old South Carolina woman who is fighting a $445 ticket she received for displaying a pair on her pickup last summer. Tice's case has been delayed three times and currently has no new trial date set.

When it comes to displaying objectionable material on one's mode of transport, I come down on the side of free expression, no matter who it offends. But then you might guess that if you saw the bumper sticker on my Subaru that says, "Read a f---ing book," only without the hyphens. Still, cars and trucks are one thing. Pets are another.

I saw a guy the other day walking a boxer (a dog, not a pugilist) and I did a full double-take when I saw the package on this creature (the dog, not the owner.) If one hadn't ought to display softball-sized rubber balls on the back of one's truck, then this dog needs to wear pants. I kid you not. I was passing by at a good 30 miles an hour and I darn near ran off the road. You've not seen a set like this since the state fair. I think the dog was part mastodon or something.

Naturally I exclaimed, "Holy hound parts, will you look at the privates on that boxer!" thereby alerting both my wife and our 13-year-old daughter to the outsized spectacle of doghood. That might not have been the right thing to do. Surely the dog knows he's got an offensively large toolbox and no drawers. There's no reason to embarrass him by calling attention to the fact.

I'll be more discreet in the future, at least I'll try. If I spot a naked dog with softball-sized testicles, I'll just quietly report the owner to the authorities. But discretion is the better part of wussdom and if I see a pair of truck nuts, I'll honk, point and cheer.