A couple days ago I was riding the Metro North Hudson Line to New York City as part of my daily morning commute. I'm used to this morning ride in which I usually catch a few extra minutes of sleep before starting the day. This time I had to listen to this conversation as we approached Gran Central.

A man in his sixties, fit, clean cut and with a full set of white hair, walked up to the four sitter where I was sitting and started talking to two women sitting on the four-sitter across me. He usually discusses sports and the weather during the last ten underground minutes of the commute.

This time he was talking politics. "Trump may not get the percentage of voters that he needs in NY. They are sabotaging him; the Republican establishment is. And the Democrats want that to happen so we are forced to go with Cruz and then they will challenge his birth place and qualifications to be president- that is how we lose the election."

"But Obama was not born in America and he got to be President!" said one of the women, a blonde in her fifties who always finishes her make up on the train.

"Yes, but his mother was American and they ran with that" the man replied.

"Oh my god", said the other woman, an Italian-American brunette also in her fifties whom I usually greet with smile as she and her commuter friend board the train in Beacon. "That is so unfair. Hillary will be the worse president ever."

"You are right- there will be no America left after 4 years of Hillary" he said.

The first woman asked "what about Bernie?" unable to hide her sarcasm.

"He will ruin America faster. He just wants to give free stuff to people" asserted the man.

In complete indignation the woman asked "Does that include me? Do I get free stuff too?!!"

"No, you work, you don't get squat. The free stuff is for takers and illegals." That was his answer.

I see the three of them every day in my commute. They are polite, I have interacted with them on occasion. They seem nice. They dress professionally and work in the city. I assume they have at least a BA. They are part of an established middle-class- just like me.

They do not fit the mold of who I would like to believe are Trump supporters. I would've never pegged them as bigoted, racist, uneducated, or ignorant based on my previous interactions with them. Yet, they are fine with Trump as president, actually, they would love to see him as president. I guess in the end race does trump gender, class, common sense, logic and basic human decency.

And I didn't realize how upset I was about this until I got back home on the same train that night. These are the same people who if I had confronted them and told them that I'm professional, a family man, who donned a U.S. Army uniform right after September 11, they would've treated me, after thanking for my service, like I'm a guest in "their country" or like I'm the "exception that proves the rule". You know the rule I'm talking about, that Latinos and non-Whites are lazy rapists bent on stealing from true Americans (Whites) and destroying our great country. It is upsetting to think that some Latinos would feel flattered when told they are "one of the good ones" as if we were predisposed to be "bad" and as we needed their acceptance.

I don't know about you but I'm planning to stay right where I am. I'm not going anywhere. This is where I live, this is my country and I will keep contributing to it but I will also shape it so it fits my needs, the needs of my family and our communities.

I see true American faces every day, people like you and me. They are the faces of men, women, Brown, Black, White, poor, rich, Muslims, Atheists, Christians, Jews, Buddhists...

Those are the faces that I saw at a Bernie Sanders' event in South Bronx this past Thursday. There was no mono-racial angry crowd- no ugly American. There I saw New York faces, American faces, hopeful faces, beautiful faces.

They, you, and I are the faces of America. 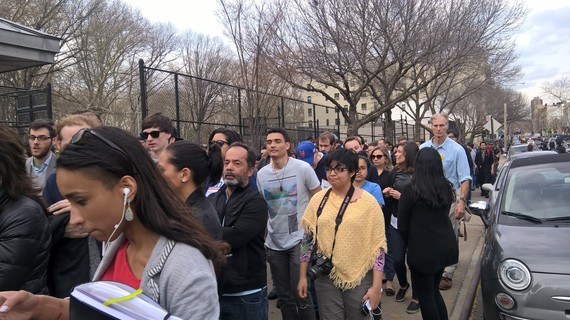 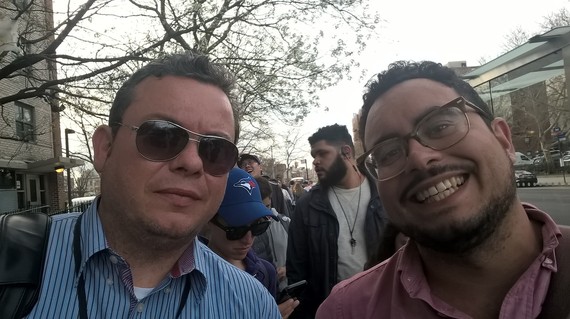