While "coming out of the coffin" has never been an easy task for any of the vampires on the HBO blockbuster hit True Blood, actress Amelia Rose Blaire (Willa) will be making more than just a sporadic appearance in Season 7, the final season. In a recent sit down and bare your fangs, she spoke of bittersweet feelings regarding the end of what has been a deliciously wild ride for her as well as her excitement regarding the upcoming season. 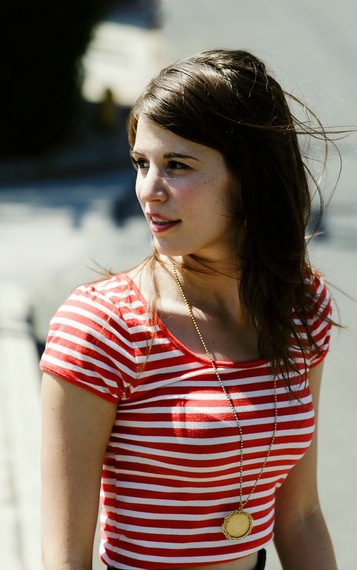 Amelia is a woman with strong convictions that ripple across a face that is disarmingly beautiful as it boasts not only an outward aesthetic, but also a truly beautiful mind.

Joshua Estrin: Your resume boasts some very hardcore theatrical credits including Chekhov. How do you apply that training to your work on television?

Amelia Rose Blaire: Nothing can take the place of solid training and the classics like Chekhov and Shakespeare as they offer any actor an opportunity to explore the layers of very complex, very well written characters. This attention to detail and the exploration of nuance allowed me to address some of the same exciting challenges in the True Blood script.

JE: Vampires are not new yet True Blood has a fan base that has set new records. What do you think is the unique appeal?

ARB: I think the show has created a remarkable balance between being authentic to the lure of the vampire while remaining relevant and at times a bit controversial. The show is very sensual and very sexual, but it also explores the persecution of a race, prejudice and has never been afraid to take on hot topics that address basic "human" rights, the role of free will as well as acceptance.

JE: Female vampires tend to have a very strong sense of self and have no problem keeping their men in check. Male viewers tend to find this very sexy... Why so?

ARB: Strong women are sexy! Strong female vampires are very sexy, and with that comes an appeal to our male viewers. Traditionally, women have been said to be drawn to the "bad boy," but it is okay for guys to find an edgy, smart, powerful woman hot as well. Yet another reason I love the show and the writing so much.

JE: What do you have in common with Willa?

ARB: I like to think I have a great deal in common with Willa as she has been able to endure great change and transition in her life. She is also capable of and not afraid to show a great deal of love as well as compassion. She is deeply concerned about her father and the plight of the vampires and as such exudes empathy for both. I have many friends who would be considered part of a "minority" and I feel for them and love and support them. At a time when LGBT issues are at the forefront, like Willa I want to be part of the movement toward understanding and equality and for that I think she and I are forever linked.

JE: What is your biggest pet peeve?

ARB: Well, I do take road rage very seriously. It goes beyond a simple pet peeve as I see it as a growing problem and violence is never the solution so in a moving vehicle I find it even more disturbing and alarming.