Note: Do not read on if you have not seen Season 5, Episode 9 of HBO's "True Blood," titled, "Everybody Wants to Rule the World."

With a three episodes remaining (after "Everybody wants to Rule the World"), it was a good time to nip those lesser stories in the bud. Terry's storyline as been mostly drab since the beginning, picking up speed near the very end, and the hate group against "supes" never quite reached its potential. Now, Sam and Luna can focus on rescuing Emma from the clutches of Russell and Steve Newlin, and Terry can go on his merry way and do Terry things.

The episode opened up with a newscast of a Tru Blood plant explosion, destroying the factory that supplies a quarter of the world's Tru Blood. From the previous episode, we know that this was the work of the chancellors of the Authority. Eric pulls Bill aside and goes, "Hey, what's going on isn't cool. We need to end this. Stop playing these love games," and Bill's all like, "I'm not playing games, but I'll help you escape, I guess."  So they devise a plan to get either Nora or Salome's blood in order to get out of HQ, because it's under Level 1 lockdown. Eric manages to inject Nora with Silver while Bill is off rendezvousing with Salome, and by "rendezvousing," I mean "having sex." Bill meets up with Eric, an incapacitated Nora, and Molly (who showed the first signs of being an actual vampire, because I wasn't actually sure she was one), only to foil their plan by having Salome and the Authority's SWAT team stop them and lead them off. I don't quite understand Bill's quick transformation (it's been, like, a week in the show's time), since he's known to be the most levelheaded person on the show. Even so, it's fun to see the good vs. bad switched between Bill and Eric.

Sookie's search for answers started off wonderfully with her having Lafayette try to communicate with the being that she saw in her bathroom in last week's episode ("I ain't Whoopi Goldberg in 'Ghost.'"). I can't not like a scene that Lafayette is in now. He went from having this ridiculous encounter with Jesus' grandfather and his pregnant ladyfriend (seriously, what was that about?) to being the shining spot in any episode. I'm glad old Lafayette is back. Let's keep him how he is and lay off the demon face. Grandma Stackhouse makes contact and tells them to look through Sookie's memory box. Sookie discovers that Bud Dearborn was the one who discovered her parents' bodies, which leads to her questioning him and being smacked over the head with a pan by his girlfriend.

Jason and Andy are on the hate group's tail. They discover via the official website for Keep America Human that Bud Dearborn, who is called the Dragon by members of the group, is the leader. We're led to believe that this is the case until it's unearthed that Bud's girlfriend, Sweetie Les Art (that's probably my favorite name of the entire series), is actually the Dragon. After some investigating, Andy and Jason find out that the group must be keeping Hoyt (and, unbeknownst to them, Sookie) at Bud's late wife's pig farm. Right when the group's about to feed Sookie to the pigs after dosing her with Oxycontin, Sam morphs into a human from pig form and fights all the bad guys (The Naked Vigilante, I shall refer to him as). Jason and Andy arrive with back up and just as Bud yells, "Humans rule!" and lunges with a shovel towards Sam. Andy shoots him dead. So long, Bud! Meanwhile, Luna chases down Sweetie and beats the crap out of her. Congratulations on achieving likable status in that one minute, Luna. You did good, kid.

Patrick shows up after running away at the end of last week's episode in order to hold Arlene hostage so that Terry will have no choice but to show up. After Terry arrives, Patrick is about to shoot him when Arlene comes out of left field and stabs Patrick in the throat (nicking an artery, supposedly. Good aim, Arlene!), leaving Terry to grab the gun. Later, while Patrick tries to use reverse psychology in order to save his ass, the Iraqi woman who Terry killed appears and tells Terry to do the right thing. And do the right thing he did. He shoots Patrick, leaving the smoke monster to emerge from the Iraqi woman's mouth and devour Patrick's body. This has to be the end of that, right? Please, no more. We beg.

Perhaps a step down from the excitement of last week's, but "Everybody Wants To Rule The World" was still a strong hour. The plots I thought were so extraneous just a couple weeks ago have nicely come together, increasing the visibility of a bigger picture, which will become clearer as the season comes to a hopefully satisfying close.

In case you were wondering, Alcide went to go visit his dad. Oh, you weren't wondering? Okay, cool, same.

Eric has been replaced as Sheriff of Area 5 by some Alice Cooper-type. Pam is not having it.

Like I mentioned earlier, Russell took Emma from Martha as a gift for Steve and as for payment for the V he's been supplying the wolf pack.

Pam and Tara didn't have too much to do this week, but their chemistry is still dynamo ("Dynamo?" Yeah, dynamo.)

Bill's sex scene with Salome/Sookie/Lilith was, um, interesting. Let's leave it at that.

Tara has been officially taken off the "Will Most Likely Die By Season's End" list. Added: Nora, Molly, Salome, Steve Newlin (unfortunately), Russell (also unfortunately), J.D., Rikki, and Martha and maybe Luna. Still on the list: Hoyt. It's gonna be a bloodbath, y'all!

Sookie: "You see anything?"
Lafayette: "Yep. One fine-ass, mothafucka with pretty new eyelashes!"

"Don't move, motherfucker, or I will blow your fuckin' brains out!" - Arlene, surprisingly

I really wanted to make a GIF of Luna smacking down Sweetie, but her boobs got in the way of that. :( 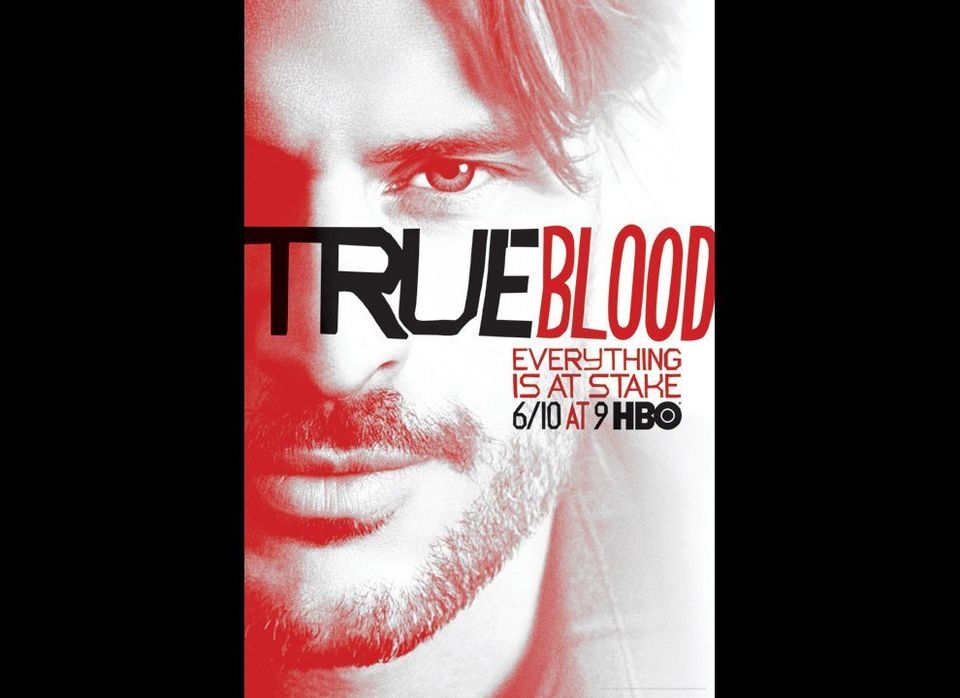