Editor's note: Do not read on if you have not seen Season 5, Episode 6 of HBO's "True Blood," titled, "Hopeless."

Holy crap! Did anyone see that ending coming? According to your comments over the past two weeks, most of you expected Christopher Meloni's Roman to last 'til at least the end of the season. But Russell Edgington had other plans. When the stake app failed to assassinate the former Vampire King of Mississippi, he turned on Roman, staking him. I'm somewhat glad that Roman's reign had ended, as his character -- hyped up before the season began airing -- was often one-noted and of little entertainment. And his muscles were very distracting, and not in a good way!

We got to this point after Sookie, Eric, Bill, and Alcide uncovered Russell at that abandoned hospital from last week. A couple werewolves on V showed up, but were quickly taken care of. Then, the Authority SWAT team barged in and commanded Eric and Bill to glamor Sookie and Alcide since they knew too much. Eric happily obliged and made Alcide believe that he is disgusted by Sookie and won't have any further sexual feelings towards her. Bill, on the other hand, faux-glamored Sookie, and this acted as his own goodbye in case the Authority still had them executed regardless of bringing Russell forward. I was always a Sookie/Bill fan, but now I can hardly see them together romantically. I can't see Sookie with anyone anymore. She's kind of just like damaged goods at this point. Eric and Bill were taken to the Authority HQ where they were in fact not killed and instead welcomed with open arms. Since they successfully completed their mission, Roman deemed them a part of his group, so to speak, and passed around a 300-year-old bottle of blood.

The next morning, Sookie and Alcide wake up with raging hangovers from their drinking binge that we almost forgot about. Sookie unglamored Alcide, and he got upset over the fact that the werewolves showed up and were high on V. He stormed out, leaving Sookie all by her lonesome ("I'm just gonna stay here and quietly slip into a coma.") Me too, girl. Me too.

Alcide made his way to the barn where his former pack likes to hang out. He challenged JD, the werewolf who got away at the hospital and who assumed the leader role of the pack, to a fight to determine who will, in fact, lead the pack. I guess we'll have to wait until next week for that fight as the storyline ended there, but I didn't find myself wondering too much about it. I really like you, Alcide, but I could not care less about your pack. They're no fun.

Speaking of werewolves, Luna's daughter, Emma, somehow stumbled upon her grandmother Martha's house. And this brings me to my "Oh, brother" moment of the week. Luna survived, which I was surprised by since I already pronounced her dead last week. Her and Sam (and Andy?) and now teaming up to track down and stop the humans who are going all "Let's kill all the supernaturals!" on Bon Temps. Paging Rene Lenier! Your people need you!

A lot of extraneous happenings in this episode. Like I said last week, everything is basically a set up for something else. It's like a cycle of set ups until the finale, so we just have to bear through the clutter and hopefully be rewarded with a crazy, blood-filled ending to the season. But with the season being halfway through, it's still hard to see that in the distance.

Terry's battle with the Human Torch/Smoke Monster is still raging, so much so that he decided to leave Arlene and the kids. Their farewell was a touching one, so I'm okay with it.

Star players this week: Denis O'Hare and Alfre Woodard. I would love to see an "Odd Couple"-esque sitcom featuring Russell and Ruby. Oh, come on! "Russell and Ruby" is such a perfect title! Totally beats "Mike and Molly"!

Tara and Jessica's fight was way too short. I wanted a full-fledged brawl.

Carolyn Hennesy was totally channeling some of "Cougar Town's" Barb in this episode.

"You did good out there fighting. Made me proud. Proud the way a human is proud of a well -- trained dog." - Pam, to Tara

Related: Tara calls Pam "Missy Pam" and I am in love with it.

Molly: "'Kay, stand still. Don't wanna accidentally activate this thing. Wouldn't that be ironic?"
Eric: [with a smile] "But funny!"

Lafayette: "Mama, how do you know all this?"
Ruby: "I ain't got no fuckin' clue, baby. The electricity just runs through me."

"Peace ... is for pussies!" - Russell, right before happily staking Roman 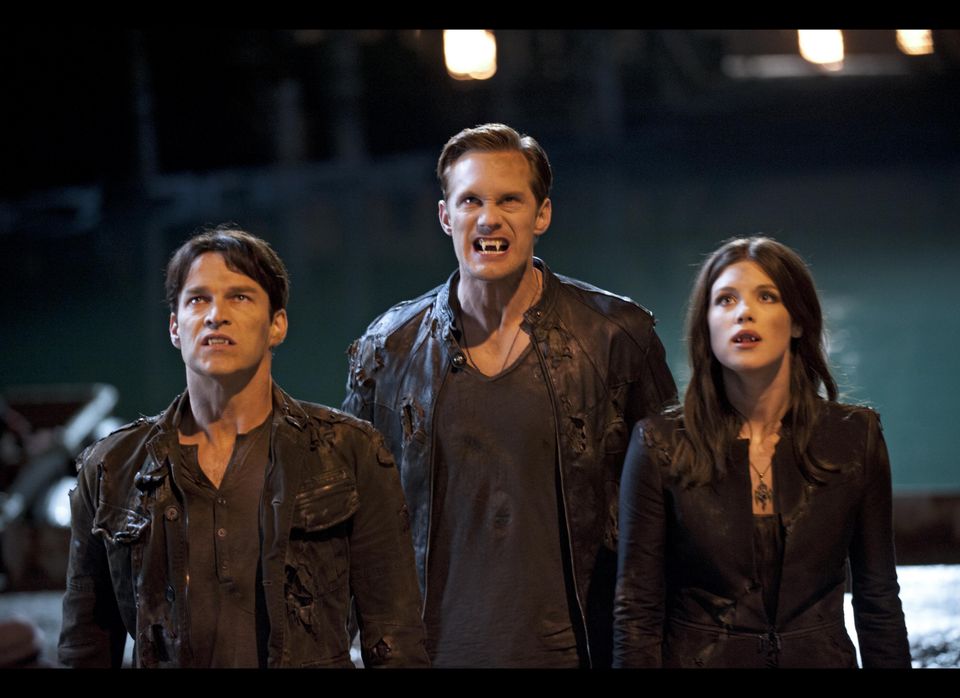