The larger arc of "True Blood" may see an epic love triangle and struggle for Sookie Stackhouse's love, but off the set, that battle was won long ago. And you just don't mess with Bill.

Stephen Moyer, in a cover story for the new issue of Men's Health, opens up about his relationship with co-star and now wife Anna Paquin, who plays the psychic object of bayou affection on the HBO show, now in its fourth season. The pair met during auditions, and at first, it was all professional. But as it so often happens, distance made the heart grow fonder.

"I did find love on set. We had met at the very first rehearsal before my screen test for HBO, for the network, for the pilot," Moyer remembered. "Our interest was piqued by each other but at that point it was like, we're about to work together for a long time, hopefully, you know, if the show gets picked up. So, there were no feelings at that point...they put us in a hotel, we were in the same hotel. We were having dinner every night. I got back to London and Anna got back to New York and I just missed speaking to her every day, which is what we had been doing up into that point. Bob's your uncle, Fanny's your aunt, and... you have a marriage."

Well, it took some romancing, including Skype calls that lasted two to three hours per night. Presumably, they weren't just going over lines.

Whether Bob or Fanny were invited, the pair were married last August.

The thing about a marriage between two stars of a massive TV show is that they have to share each other with the world. Especially with a rabid fan base like the one that obsesses over "True Blood." Which means there has to be some understanding -- sometimes.

Hey, if it keeps the show popular. And speaking of, check out the first clip of the new season; it's a bizarre one, as it kicks off with Sookie in the fairy world. What happens from there -- will she choose Eric after saving him and hearing his revelation in the season finale, or Bill, who fights Sophie-Anne? We'll just have to find out. But Moyer isn't opposed to a Sookie-Eric fling.

I’m sure you’d love me to tell you that we loathe each other and we fight every day, but if you came to the set, you’d just see us having lunch, laughing, the three of us," he told The Los Angeles Times on Tuesday. "There’s not really a story there. But we are interested in how the show works, and we are very much into helping the show move along. I went up to him at the beginning of the season, and I just went, look, I want you to do your job to the absolute best of your ability, and I will not be around when you have to do that stuff... I think it’s great for the show, I think the fans who have been waiting for that stuff to happen will be very pleased with the way it plays out.

The stars of "True Blood" had its premiere on Tuesday night; check out the Men's Health Cover photo, and then a slideshow from the big night. 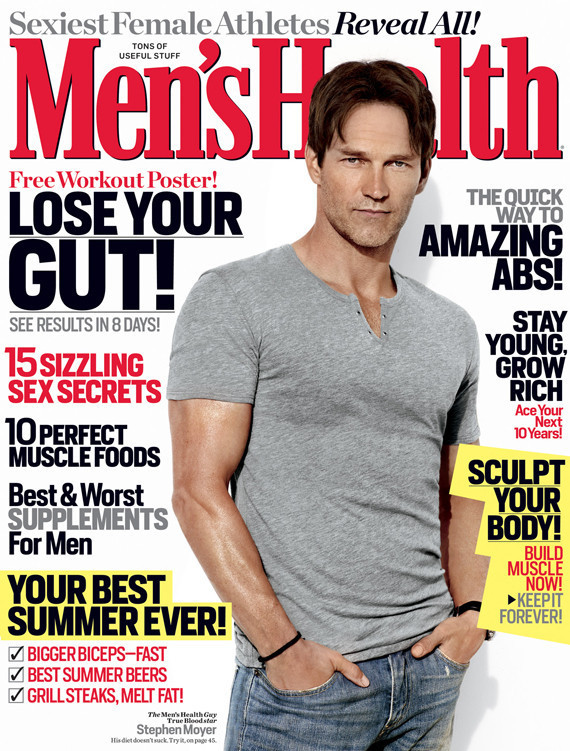