By Sara Johnson
Sometimes our Pit Bull, Sheba, climbs into the lap of my brother, Shane, and licks the tears that fall on his cheeks.
"Not too long ago I had a mental breakdown which drove away my desire to even get up or take care of myself," he said. "Sheba just knew something wasn't right and her instincts kicked in. She picks up on body language, I feel like my mood affects her. She came right to me and that persistence of her staying by my side -- no matter how bad I felt about myself -- helped break that mental state."
Because he doesn't have much of an immune system, Shane's body has to fight much harder than most to stay healthy. Shortly after being diagnosed with Common Variable Immune Deficiency (CVID), he learned that he also has Avascular Necrosis. That means he needs replacement surgery in both of his hips at just 32 years old.
Our dog comforts him and -- surprise! -- she is gentle.
Due to common myths, unreliable statistics and skewed representation in the media, Pit Bulls get a bad rap. If more people met Shane and Sheba, they might rethink this breed.
"Sheba is a family member and a wonderful companion," Shane said. "Companionship is important to the human psyche."
CVID impairs the immune system and affects no more than one in 25,000 people worldwide. According to The U.S. National Library of Medicine, people with CVID are highly susceptible to infection from foreign invaders such as bacteria or viruses and often develop recurrent infections. Simply put: my brother gets sick a lot.
There is no cure for CVID, only the treatment of symptoms. The emotional toll on my brother is just as difficult as his physical symptoms. Sheba helps my brother cope with his depression.
A few months after a hospital stay, my brother and I decided to adopt our rambunctious friend, who barks at squirrels, sneaks bites of our food, and plops her 65-pounds of muscle onto a warm lap to snuggle.
Due to his declining health, Shane had to leave his job as a maintenance man at a local church. So, he has time to spend with 3-year-old Sheba, who wound up homeless after her previous owner died.
People think Pit Bulls are inherently dangerous and aggressive. They are even listed as "world's most dangerous breed" on some untrustworthy websites. Shane disagrees. His opinion comes from his own experience.
"When Pit Bulls are put in the right environment they will prosper and become a great addition to any family," he said. "The difference in breed really doesn't affect the temperament of a dog. It's all about the environment that dog is in."
The media perpetuates the stigma with stories of attacks primarily featuring Pit Bulls as the perpetrators. This breed is misrepresented as vicious and uncontrollable while leaving out crucial details like cruel treatment from owners or being provoked.
"Just like any negative stigma," Shane said, "the select information provided to people can interfere with them forming their own original opinion. Some people don't understand how easy it can be to manipulate statistics."
Society fears the breed -- maybe they should fear the people who train dogs to fight for pure entertainment.
According to The American Society for the Prevention of Cruelty to Animals, (ASPCA) today's pit bull is a descendant of the original English bull-baiting dog. They were bred to bite and hold bulls, bears and other large animals.
Baiting large animals was outlawed in the 1800s so people turned to fighting their dogs against each other. Larger, slower bull-baiting dogs were crossed with smaller, quicker terriers to produce a more agile and athletic dog for fighting other dogs.
"They use them because they're extremely loyal," fighting investigations trainer Sheriff's Sgt. Ken Sullivan told MLive.
While some pit bulls were bred for their fighting ability, others were specifically bred for work and companionship. Prior to the 1980s, when dog fighting made a comeback, they were known for being farm dogs, military mascots, and family dogs. In England, the Staffie Bull is affectionately known as "The Nanny Dog" because of their nurturing demeanor toward children.
"Pit Bull" is a generic term that can refer to several breeds. Yet the stigma is so strong that any dog with the "look" of a pit bull is subject to breed discrimination and higher rates of euthanization.
A study by the organization Animal People reports a 93% euthanasia rate for pit bulls with just one in 600 finding a forever home.
A common myth is that "pits" have a higher bite rate than other breeds yet the proof to support this claim is lacking. According to statistics published by the National Canine Research Council, the owner's prior mismanagement of the dog and the owner's abuse or neglect of the dog were contributing factors in more than 80 per cent of dog bite cases.
Furthermore, according to the American Veterinary Medical Association, "It is not possible to calculate a bite rate for a breed... [because] mixed breeds are commonly described as purebreds ... [and] the actual number of bites that occur in a community is not known if they did not result in serious injury."
"It's true that the pit bull breed isn't for everyone," Shane said. "But the reasons not to get a pit bull shouldn't be born of fear. Fear comes from a lack of understanding."
Shane has his good and his bad days. Sheba is there for both. She fetches the ball and plays tug-of-war when Shane has energy. She lies beside him while he recovers from his treatments. She gives him purpose beyond his affliction.
"She makes me feel needed," he said "regardless of my physical or mental condition." 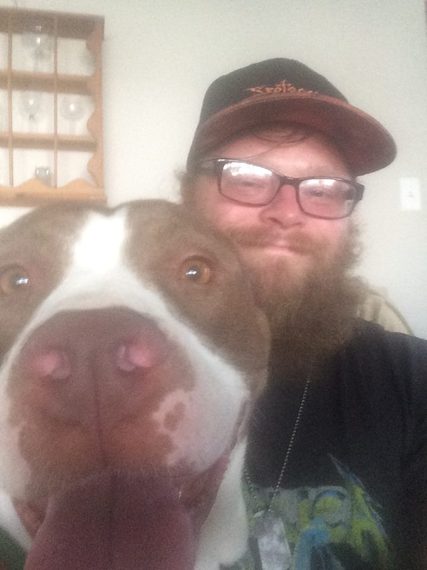