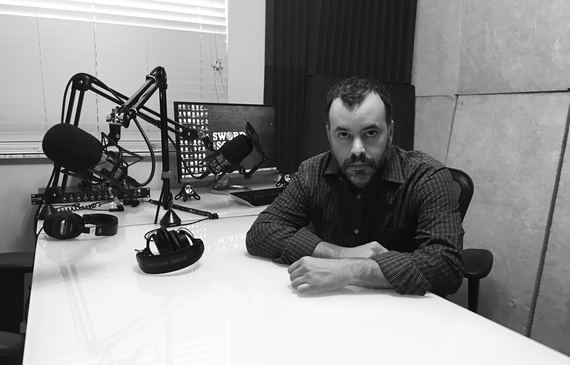 True crime. It's a cultural fascination, an obsession. Like a trainwreck, it's difficult to look away. There's something about delving into the deepest darkest recesses of human nature that we find compelling. Somewhere in that darkness, we see reflections of ourselves, albeit a version that we'd rather not embrace.

Damn, I think Mike Boudet's theatrical verbage is starting to rub off on me. Mike is the host of my favorite podcast, Sword and Scale, now in its third season. He painstakingly recreates some of the most heinous and oft-overlooked crimes by weaving together audio, news clips, atmospheric music, and commentary to create compelling case studies in evil.

There's been a recent wave of interest in the genre thanks to the podcast Serial and shows such as The Jinx and Making a Murderer. But while those genre lynchpins have more or less vanished from watercooler talk, Sword and Scale is consistently grinding out episode after episode of unsettling murder and mayhem.

For Mike, it's all about passion -- not just for true crime, but in creating a narrative that leaves a lasting imprint on his listeners. In this first part of a two-parter, we discuss the beginning of Mike's fixation, work/life balance, and the magic of radio.

How did your interest in true crime come about?

Mike Boudet: I tried my hand at a few different podcasts, some better than others, but nothing seemed to be the right fit. It wasn't until my birthday in 2013 that the idea of doing a podcast about true crime came to me.

Sitting there, reminiscing on that October night, it came to me that I've always been fascinated by true crime TV shows and documentaries. In fact, for years I would go to bed watching one of four shows: The First 48, Dateline, Forensic Files or American Greed. I've had a pretty dull office job for several years now and practically watched the entire trials of Casey Anthony, Jodi Arias and George Zimmerman while optimizing search engine ads at work.

Back in high school, I discovered the first season of Law & Order and became fascinated with the criminal justice system. And let's not forget OJ, the trial of the century that captivated the nation in my teen years.

In any case, the sudden realization came to me that day that I had always been a huge fan of true crime and criminal justice themes and this was what I should make a podcast about. Turns out, I was actually right.

People might consider this fascination macabre, but is it something more than that? What is it about these stories that intrigues you and your audience?

MB: When it comes to true crime there's always a certain amount of rubbernecking going on. We all slow down at the site of a crash. But I think there's a lot more to it than just the shock or horror. We all like to think we live in a civilized society where horrible things seldom happen. We inform our personal relationships, our behavior, even our belief system based on that very idea.

We get very jittery and uncomfortable when our cages are rattled by the suggestion that that idea is bullshit. The world is not such a beautiful place. I like to rattle cages, but I do it in such a way where I first capture your interest, then your imagination, then make you think about what it is you actually believe, and what you think the world around you really looks like.

How do you manage the work/life balance?

MB: Right now, there is no balance. I work constantly. I still have a full time job, then come home and work on Sword and Scale. My weekends are full of research and editing and re-editing, but that's OK. We're coming up on our third year and the show has grown to levels I could have only dreamt about when I started. Soon, I'll have more options available and I'll be looking to establish some sort of balance that makes sense.

What criteria do you use to select cases for each episode?

MB: I pick cases that I find interesting. That's basically it. There has to be something that interests me, for me to spend 30 hours putting together an episode. I will say that I don't like missing-persons cases, because they all end the same way: "... and we don't know what happened. Goodbye." Also, sometimes new fans think that we're somehow investigative journalists that can look into a "whodunit" case and uncover new details.

First of all, I'm not a journalist. I'm a storyteller. I weave together different elements to tell a story. Sometimes that includes interviews with those close to the case, but I'm not going to solve a 30-year-old cold case with the resources of one guy in the spare bedroom of his house.

What is your research process? What resources do you have at your disposal?

MB: Well, I don't like getting too specific about my sources or methods, but there's obviously a lot of Googling going on. There are public resources once you flesh out the details, locations and key players of a story. I do everything so it is very time-consuming and takes a long time to get all the correct information.

Listening, I feel like I'm sitting around a radio, listening to old pulp stories of the 50s, etc. How do you think the medium lends itself to the stories that you are telling?

MB: Thank you. That's an insanely great compliment. We forget that there was a time, not all that long ago, where everyone sat around the radio and listened to great stories being told.

Back then, they used a lot of the same "tricks" I implement today such as music and Foley sound effects to immerse the listener into the tale. There's a certain magic to radio, even now. It allows the listener to use their own imagination to fill in the visual gaps, which can be more powerful than film or television. I think some of the best contemporary examples of that are what Art Bell did with Coast to Coast. I still remember listening to that on AM in the middle of the night on a long road trip and getting utterly freaked out.

What does the production of an episode look like from start to finish?

MB: Well, it's a lot of work. I always get a little down after finishing an episode 'cause I have to start over from scratch. I go through this process of doubting myself, and whether I can do it again. Eventually I get 5 minutes of audio down, then 10, and then after 20, everything starts to naturally come together. I'll usually finish editing the last 40 minutes over a marathon weekend, every other week. Then there are always edits after that to fix things that I missed the first time around.

Prior to any of this though, there have been hours spent reading an author's book (I read their entire book, not just skim through it) or procuring interviews, conducting interviews, recording and editing clips, removing the "uh's", "um's" and unnecessarily long pauses from interviews. I also spend a few hours selecting music, or finding appropriate sound effects.

Stay tuned for Part 2 coming up...