If you'll grant me an indulgence, I'd like to take a moment to talk about what so many other people are talking about: Sunday's episode of HBO's "True Detective." What a world we live in that this thing was broadcast to the world on television -- an hour of over-sizzled noir angst, played by actors who'd taken leave of their senses, directed into a disconnected pastiche of Lost Generation cliches. And it's all about the aftermath of a proposal to build a light-rail system in southern California. Again: What a world!

Having only watched one episode of the second season, I obviously don't know what might proceed from here. Will it become the "embarrassing television show we deserve," as Washington Post critic Alyssa Rosenberg suggests? Is it going to be a much more fun television series because it's objectively terrible, as Deadspin's Rob Harvilla offers? Will ensuing episodes contain more than 31 "ridiculous moments?" I couldn't tell you. Maybe this show is going to be mostly codswallop!

One thing I do know for sure, however, is that Sunday's episode proves that if you want to make "golden age era" television, the secret is to make super-complicated television.

I'm focused primarily on the bar scene from the second half of the show. If you saw it, you know what I'm talking about. The bar scene that features singer-songwriter Lera Lynn, who was tasked with penning the darkest, saddest song ever given voice, demonstrating that she succeeded in that task. Let's set up this scene, okay? I guess these are technically "spoilers," but I'm not actually sure I can spoil this?

Colin Farrell plays a corrupt cop named Ray Velcoro. Earlier in the episode, he was sent to threaten a Los Angeles Times investigative reporter whose byline appeared on what purported to be a lengthy series of newspaper articles about local corruption. "Journalism" works by different rules in this universe, because apparently you can send a masked-up Colin Farrell to a reporter's apartment to beat him up and steal his notes and his laptop, and the story the next day won't be "Area Reporter Covering Local Corruption Is Beaten By Masked Criminal: 'I Guess We're Onto Something,' Says Editor."

(This part of the plot really doesn't make any sense! Why isn't this reporter's work for this series of stories about local corruption safely on his Google Drive, or something? In fact, surely the entire series is in the hands of his editor, all trimmed up and ready for publication. Right? I guess stranger things have happened at Tribune Co. papers.)

Later in the show, Velcoro meets Vince Vaughn's character, Frank Semyon (standard-issue shady underworld figure tryna go legit) in a bar, to deliver the goods. Now, Velcoro and Semyon have a somewhat complicated backstory that explains why they are bound together in this fashion, but we'll let that go for the moment, to focus on the ordinary logic of the scene itself. This is a scene about two men meeting at a bar, in which one man has important information to give the other, based upon a felonious arrangement the two men made with one another.

Now, if this were me, writing this scene, I'd probably do something like, "EXTERIOR ESTABLISHING SHOT" followed by "INTERIOR: BAR, IT IS NIGHT, A SINGER IS REVEALED MID PERFORMANCE, SHOT PANS TO BOOTH WHERE VELCORO AND SEMYON ARE REVEALED, TOGETHER" and then I'd just get on with the scene. But that's why I don't get paid to make Noir 3.0 for HBO, because apparently the point is to use 15 shots to do the work of two.

Let's go through the insane mise-en-scene!

First, we start with the exterior shot, bridging us from the previous scene into the bar. So far, so good. 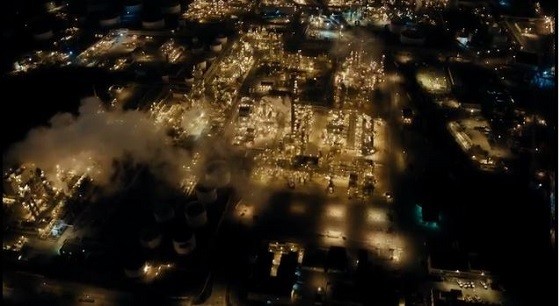 We cut right to Farrell. He is smoking. 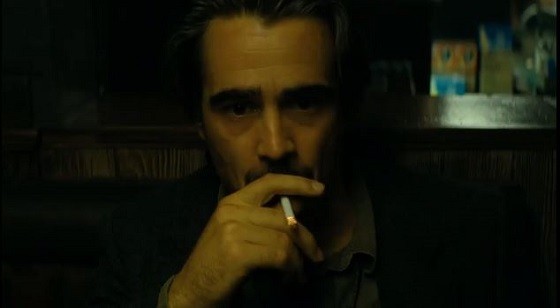 He is also brooding, angstfully, as all men must do in this fallen world. 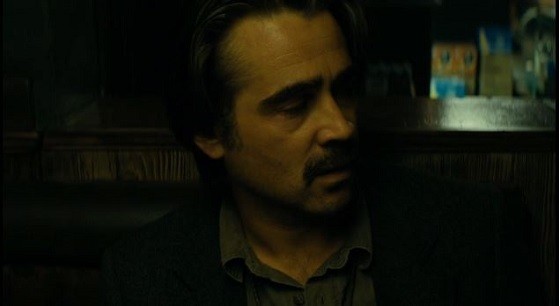 Let's get a shot of Farrell from the side. Okay, we've firmly established that he is in some sort of bar. 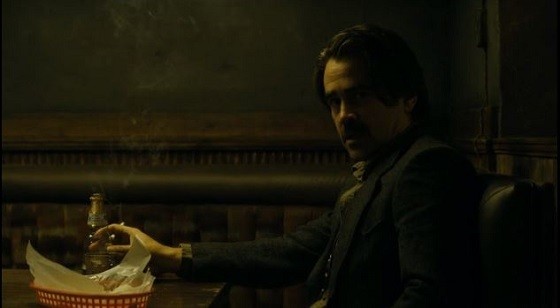 There's the aforementioned Lynn, lifting the spirits of the bar with her rousing, "This is my least favorite life" song. 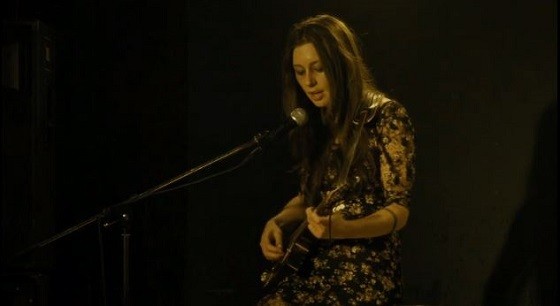 Now we'll establish that Vince Vaughn is there, too. 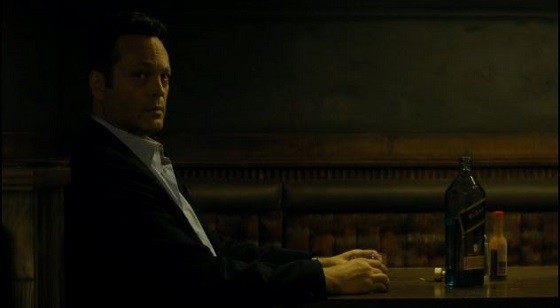 Did you forget that Colin Farrell is there, smoking? It's been a few seconds since this was addressed. 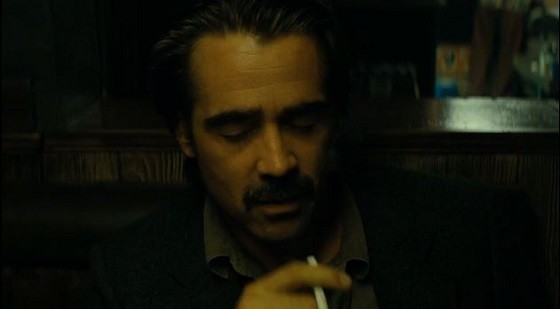 Let's take a long look at him, actually, so that we remember: He's Troubled! He's Brooding! 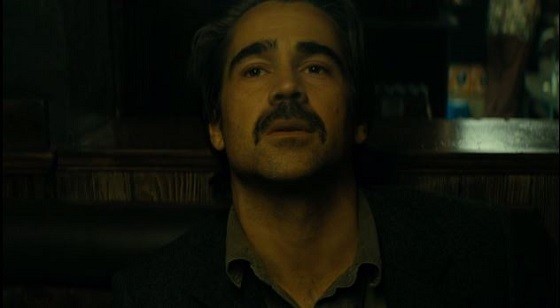 Let's take a longish look at Vince Vaughn, too. I guess that both actors' agents demanded their clients get an equal amount of screen time in which to stare into the middle distance. 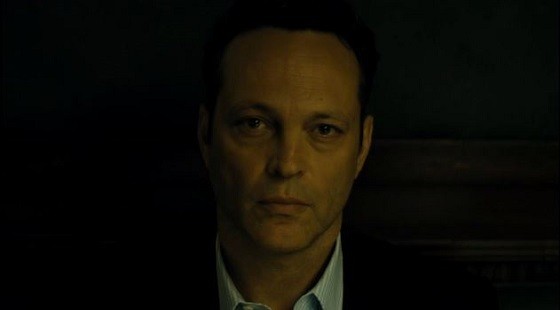 Why haven't they started a conversation, yet? Are they at different bars? Maybe they are at the same bar, but sitting apart from each other, and they don't know it? What a comedic situation that would be! And it would explain why these two men don't just start talking about their criminal enterprise.

But now we get a shot that pans across the bar ... 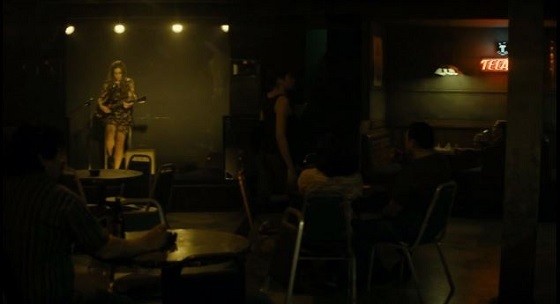 ...ultimately revealing the two men, seated at a booth, together. 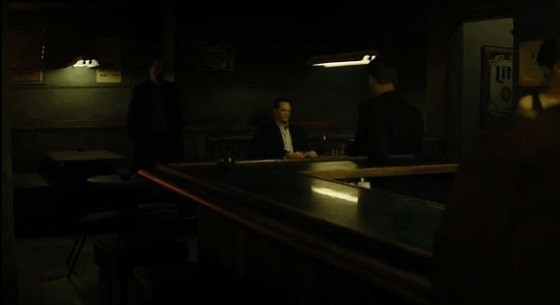 Now, this would have been the shot I would have used to establish the scene, so I guess we can now say that the real circumstances of this meet-up are now firm, and the conversation can begin, right?

Nope! We get another shot of Farrell from the side, smoking. 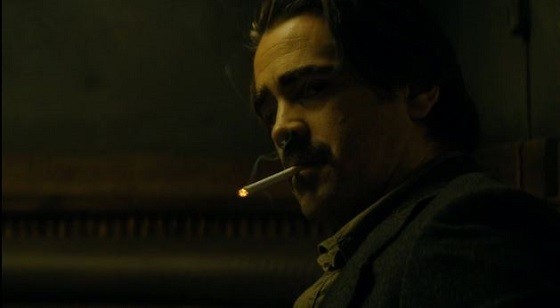 And another shot of Vaughn. 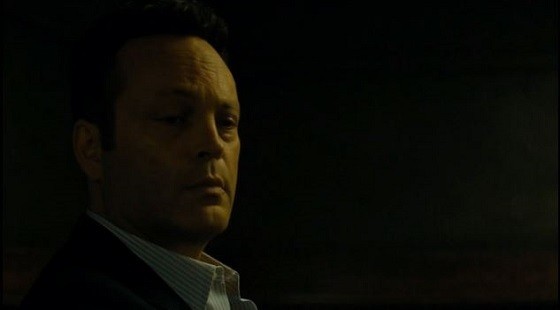 Are you impressed with the work that Thomas Friedman's mustache has been doing in this scene? Let's take another close-up of that. 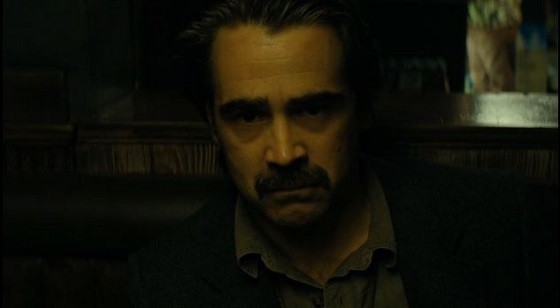 Back to Vaughn, in close up, his head now cocked to the side, as if to say, "Wasn't something supposed to happen in this scene?" 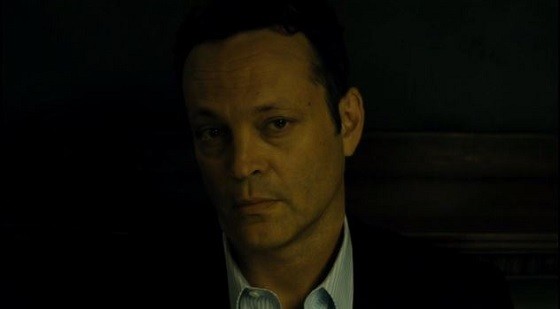 Then there is a two-shot of Farrell and Vaughn, two men trapped in a flat circle of never-ending establishing shots, wondering if they'll ever actually get to start "acting." 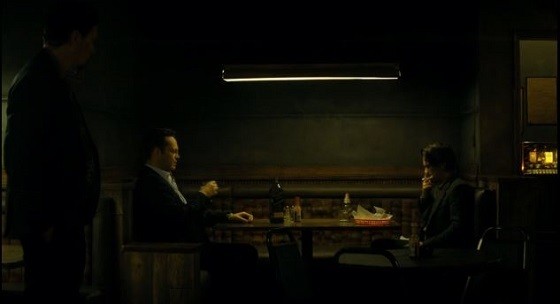 Finally, the scene begins, with Farrell handing over the laptop and notes of this poor reporter, who'll never know the satisfaction of winning that Pulitzer for Investigative Journalism, thanks to this cunning plot. 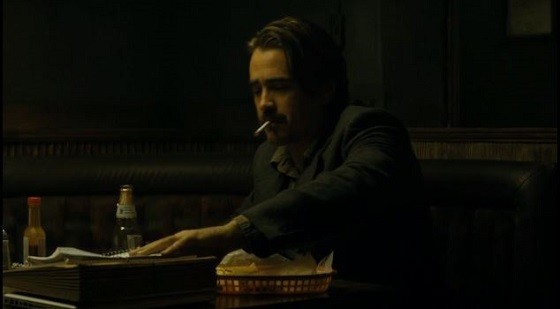 This scene isn't the most credulity-straining thing last night's episode asked us to endure (that prize goes to Taylor Kitsch's character's insanely fortunate meet-cute with this series' seemingly central murder victim), but it is emblematic of what's driving television critics to hurl pointed WTFs at the show today -- the people on this show do not behave like normal human beings. Normal human beings who find themselves in these circumstances (one man steals a laptop to give to another man) don't sit quietly at a bar, staring at each other anxiously, brooding about existence for minutes on end before initiating a conversation with one another. This scene exists because the people making this show have gotten high on their own supply, and have decided that this season is going to be one long and indulgent session of "screenwritering."

Harvilla puts it well: "A fun thing about prestige TV in particular, for whatever reason, is that in the second season you find out what the showrunners thought everyone liked about the first season, and it makes for high art when they guess right but much higher entertainment value when they guess wrong." Whether this show continues this sudden veer into sure-to-be-hatewatched territory is anyone's guess. Maybe this first episode was just an overstuffed hour building to the point where the major characters are enjoined and the quest is on. Maybe it gets tauter and more sensible from this point forward. All I know is that when you watch that bar scene, you can't help but think, "We in Carcosa now, son."