There's only two episodes left on "True Detective" and the identity of the murderer (or the Yellow King) is still unknown. With a show like this, filled with meta-layers, where reality and fiction are at war, and where every frame seems to hold a clue, the mystery likely won't be solved until the last minute. But there's also the high chance that the clues hinting at the killer have been right in front of us all along.

Any diehard fan has noticed that imagery in the opening credits includes characters from the first few episodes -- Burt in the revival tent, the stripper in the American flag outfit, etc. But in last Sunday's (Feb. 23) episode, "Haunted Houses," when Rust pays a visit to Reverend Billy Lee Tuttle, two subtle references are made to the opening credits.

The neon cross in Tuttle's officeThere's no mistaking that the giant neon outline of a cross hanging on Tuttle's wall is any different from the one in the opening credits. With the below side angle of Tuttle, it seems like director Cary Joji Fukunaga wanted to point our eye toward this cross for a reason. But could this just be another instance of the credit's serving as a collection of random people/objects throughout the show? 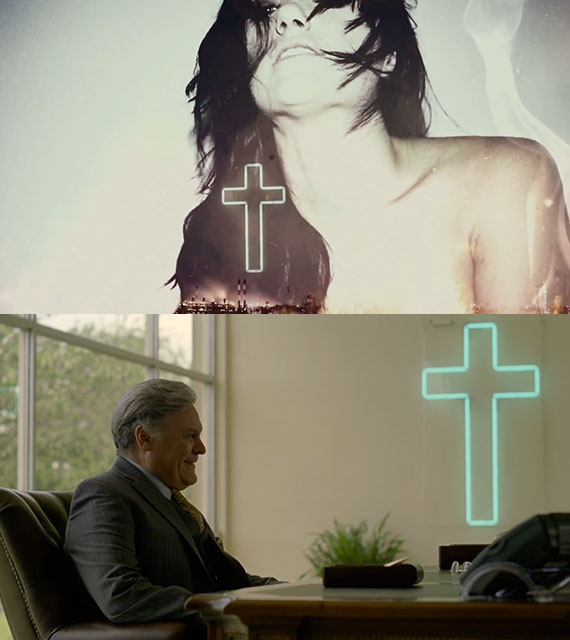 The cross in the titleWhen watching the credits before episode 6, I couldn't help but notice how interesting the main title image was. A large cross expands across the screen and shrinks between the words "True Detective." But this thin reddish-brown cross doesn't just go away; it sparkles and illuminates as is splits the letters of the show's title. Maybe I'm just overly analyzing, but at the time it caught my eye.

A similar thin red-brown cross in Tuttle's officeWhen Rust leaves Tuttle's office, the camera stays on Tuttle for a little longer than necessary as his mahogany doors slowly shut. As the light hits the doors, thin reddish-brown crosses, similar to that in the title sequence, cover both sides of his doors. Sure, this is an incredibly minute detail, but for a director so conscious of his visuals and symbols, it seems like an important connection. 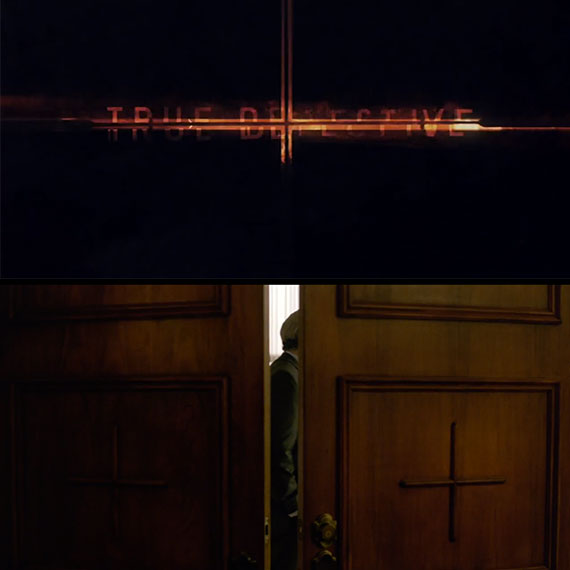 After rewatching the credits (probably for the 15th time), I noticed how predominately they signify religious iconography, and let's not forget that Tuttle is a reverend. Could this mean the church is behind the killings? Could Tuttle be the Yellow King? The latest episode seems to hint at that, and while that almost seems too easy, it can't be denied that religion plays a key role in this show.

One of the first images of the credits is of a steeple superimposed with the image of what appears to be a factory gear or handle in the shape of a cross. 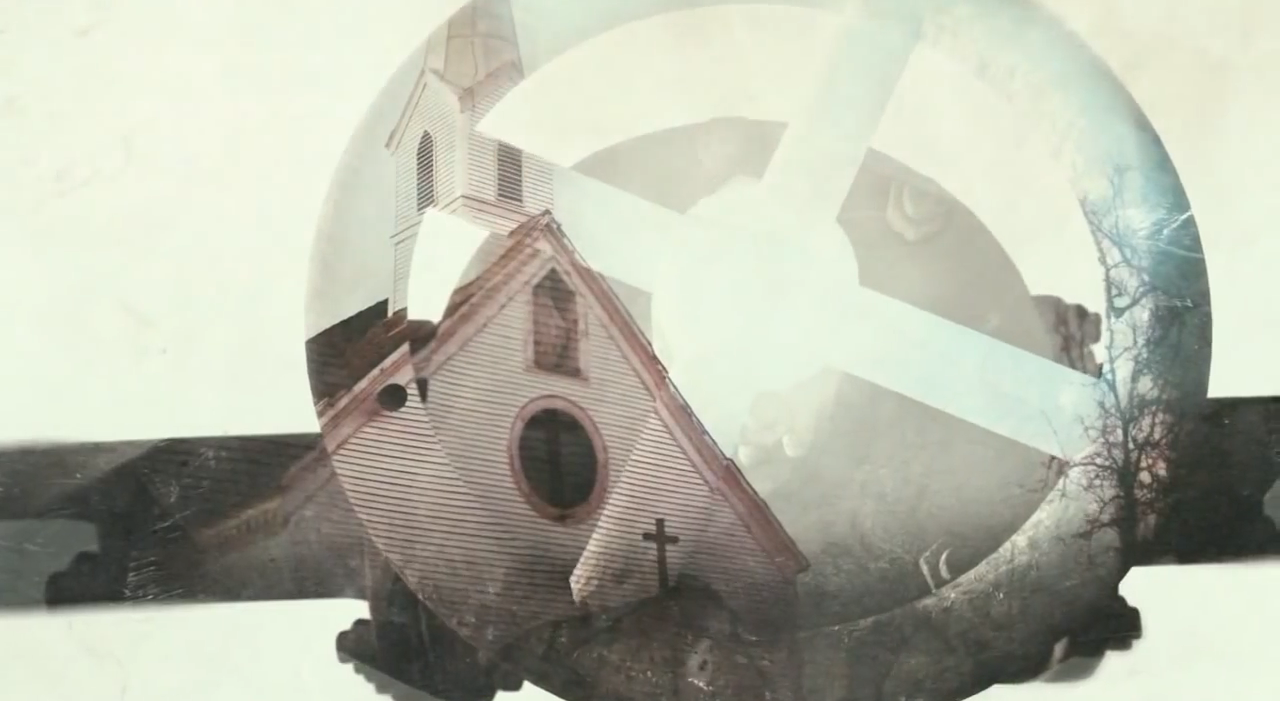 This image of Bert, the mentally challenged man in preacher Joel Theriot's tent revival, represents religion two ways. First, Bert is clearly throwing his hands up in spiritual praise, and second, layered over him is the clear image of a cross. 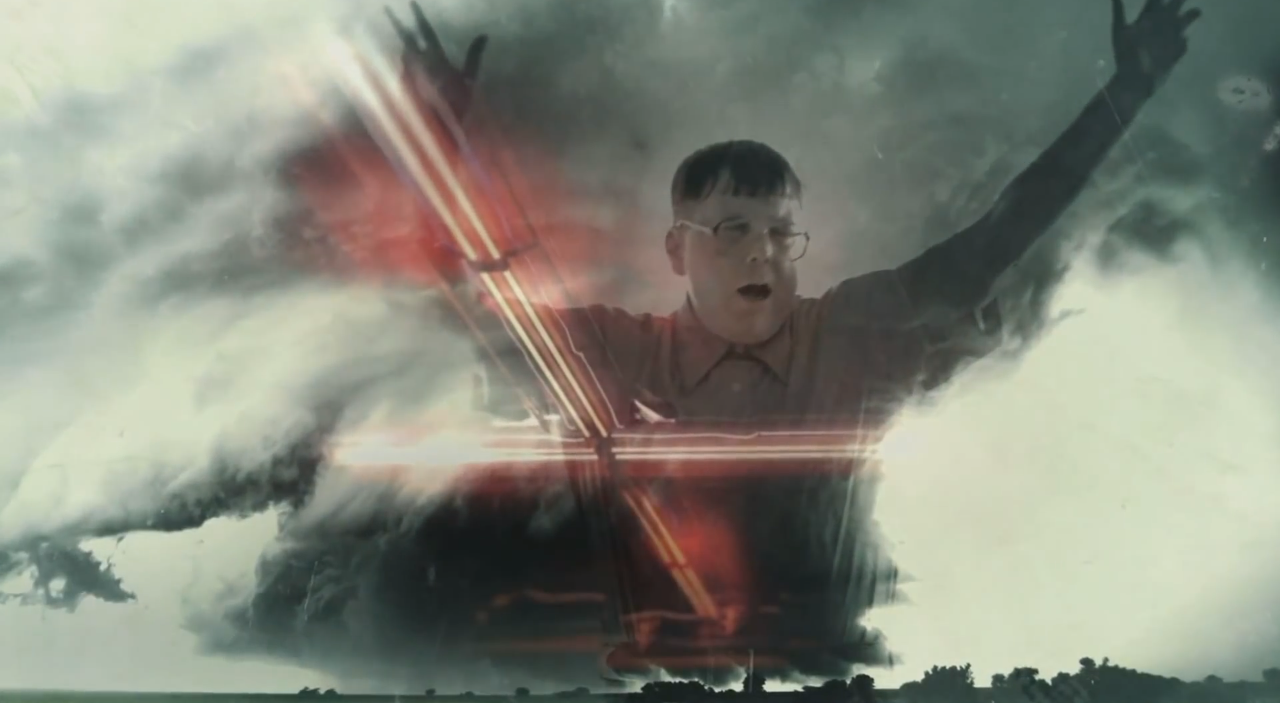 Then of course there's this shot of Rust in his bedroom with his cross hanging on the wall. Russ explained in the first episode that while he is not a religious man, he has the cross as a form of meditation. "I contemplate the moment in the garden, the idea of allowing your own crucifixion," he says. 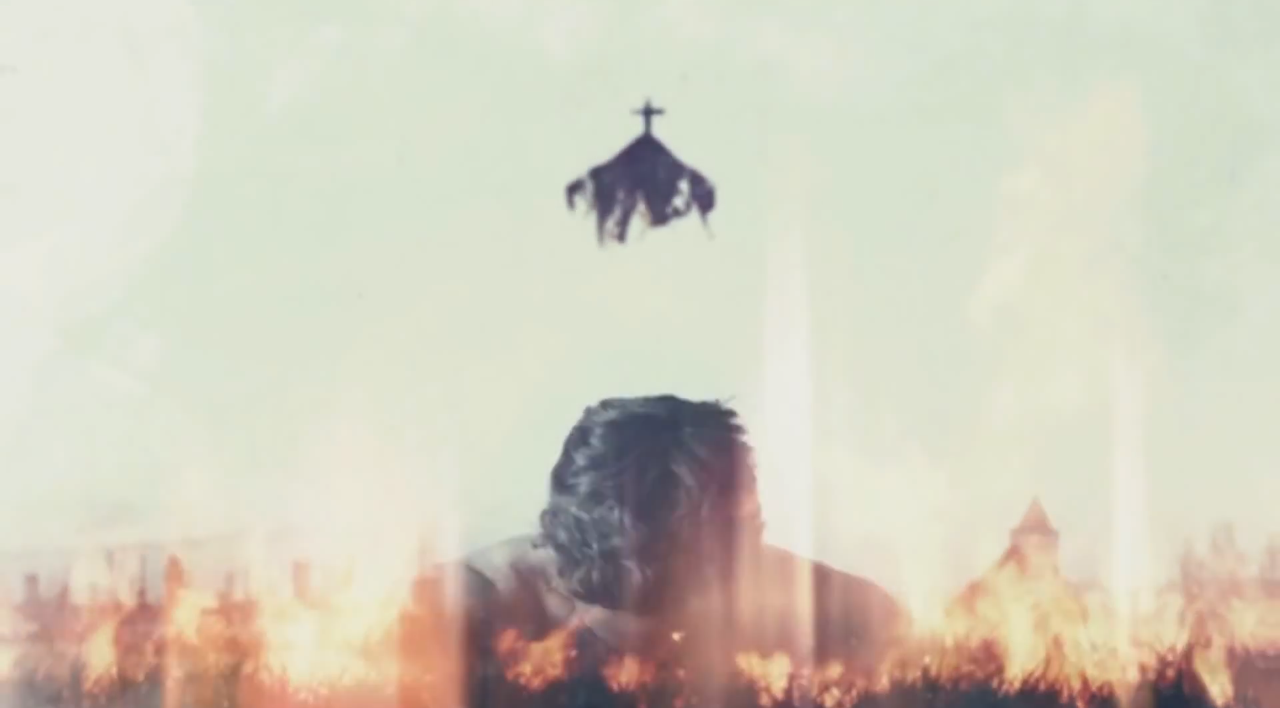 This image of townsfolk praising in church is a clear reference to religious worship. 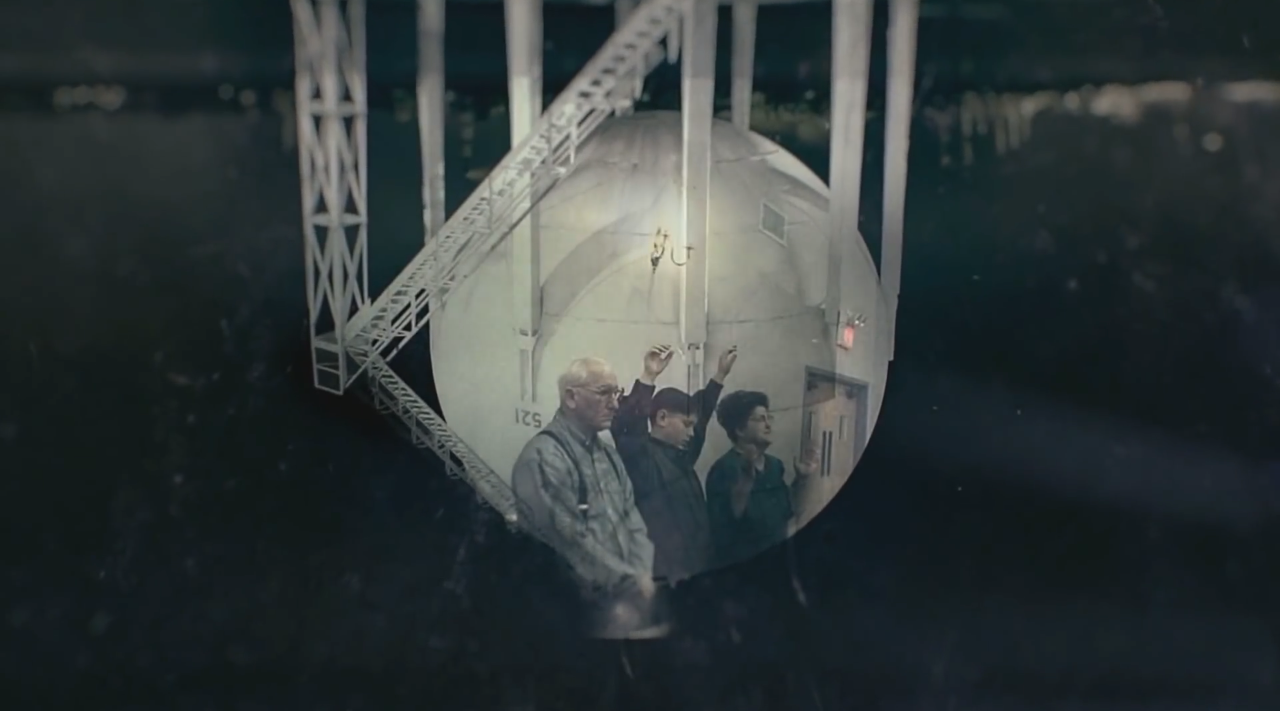 The slight figures of a cross fill the screen two more times in the credits. This one shows up briefly. 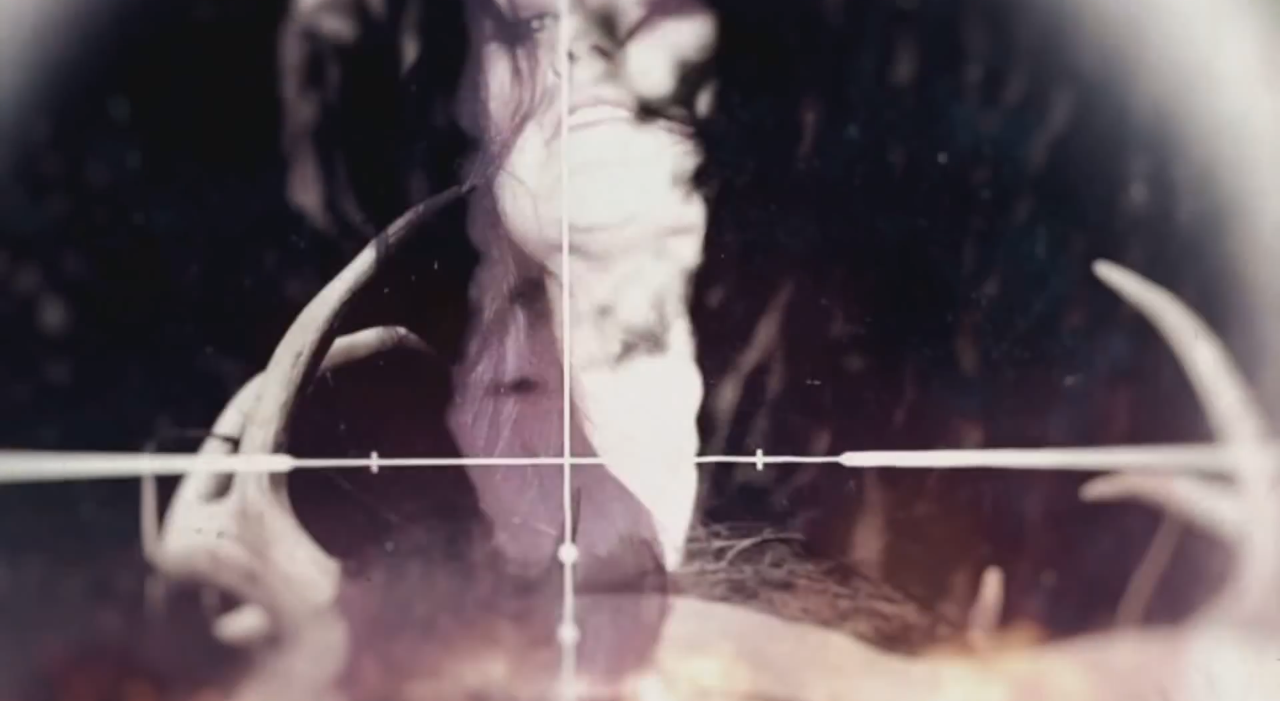 The thin white lines that to form a cross appear again. 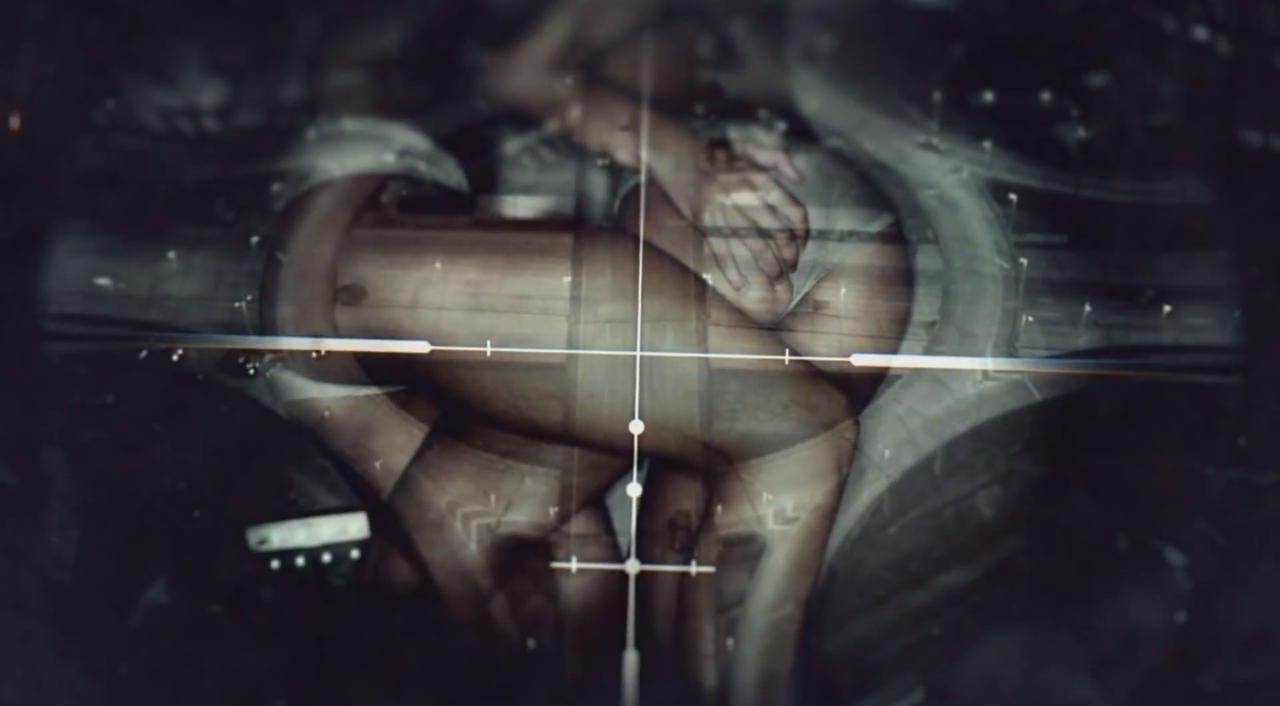 This superimposition of perpendicular highways over Marty's face also somewhat looks like the shape of a cross. 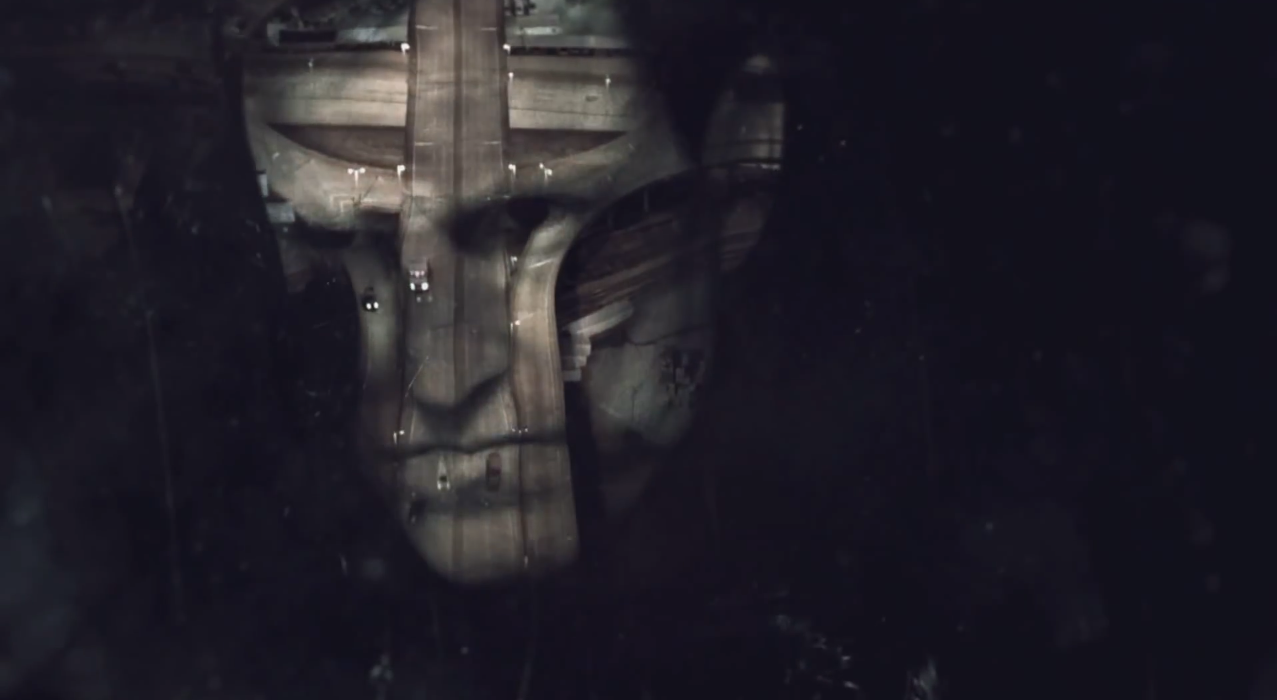