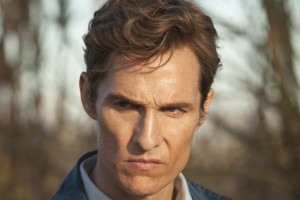 It's easy to imagine an alternate resume for Matthew McConaughey. He drifted toward A-list status in the late '90s and early '00s, and if that path had solidified, he could have ridden his Texas-bro persona into a middling career full of dumb action movies and dumber romantic comedies. Eventually, when the film roles dried up, he could have cashed in on his fading box-office pull by playing a drawling cop on a predictable crime procedural.

The good news is that McConaughey has taken a lead role in a crime-oriented TV series under very different circumstances. He has spent much of the last decade proving he's one of the best actors of his generation, appearing in a series of films that have allowed him to show his impressive range. McConaughey brings every bit of that skill, confidence and undeniable charisma to "True Detective" (9 p.m. ET Sunday, HBO).

Woody Harrelson, a TV veteran who went on to a fine film career, is McConaughey's co-lead in the murder mystery, and I don't mean to damn him with faint praise by heaping superlatives on McConaughey. Harrelson is an effective presence in his own right, but his role as a Louisiana detective is both less showy and occasionally prone to cliche.

But the obvious rapport these actors have as friends and previous acting partners is one of "True Detective's" considerable strengths. The irony is that the drama revolves around two cops who don't like each other much and who parted on acrimonious terms, for reasons that aren't spelled out in the first four of its eight episodes.

Even if the actors' roles aren't equally transfixing, "True Detective" is a frequently spellbinding affair, and recalls Jane Campion's atmospheric "Top of the Lake," which also explored the long-term damage that violence does to individuals and communities.

Crime TV is experiencing something of a golden age, what with shows like "Broadchurch," "Top of the Lake," "Hannibal," "The Fall" and "Rectify" asking thoughtful questions about violence and creating indelible character portraits along the way. These shows aren't always easy to watch, but they're united by a complex view of human weakness and a desire to tell stories about death and suffering through fully realized characters in distinctive places. The creators' intents may not always match their ability to execute -- all of these shows, including "True Detective," have their flaws -- but they all had moments that lingered with me for days. These shows aren't about tidy moral reckonings, they're about the idea that, as McConaughey's character says, "Nothing is ever over."

As was the case with "Top of the Lake," a small, well-matched creative team is responsible for every episode of "True Detective": Novelist Nic Pizzolatto wrote every hour, and director Cary Joji Fukunaga brought a sure and subtle hand to the series, which was shot on location in Louisiana. Their cohesive viewpoint helped me to forgive "True Detective" for some of its rougher spots, and the poetic visuals undoubtedly strengthened the most effective aspects of the drama.

The framing device revealed in the opening minutes is dead simple: Harrelson and McConaughey play Martin Hart and Rust Cohle, Louisiana detectives who worked a disturbing murder case in 1995. We see their dogged pursuit of the killer in the past, and in 2012, we watch them as they sit in a bland office and respond to questions from present-day detectives about that big case.

A few things slowly become apparent as "True Detective" effectively mines the mystery of the detectives' past: Hart and Cohle's lives have changed in awful ways in that 17-year interim, their strong need to give their pasts a cohesive narrative can't be trusted, and both men are smart enough to guess that there's probably a terrible reason for the sudden interest in the old case.

"True Detective's" evocative version of Louisiana feels empty and tattered, as if the world had left it and its people behind, but the drama can ramp up the intensity and pace with smooth assurance when necessary. The show is most interested in the fractured emotional lives of its reticent characters; now and then it takes on the air of a fever dream or a recalled nightmare. The show's best scenes, however, are those in which the camera rests on the Cohle of 2012, as he talks, drinks and smokes in a battered office. Fukunaga knows that simply letting McConaughey hold the screen is all he needs to do, and the actor does not disappoint.

There is something dead in Cohle's eyes, and yet so many of his digressive monologues are mesmerizing. Cohle's line of polished, half-convincing, good ol' boy nihilism is the character's shield against the world, and you can never quite tell what he actually believes and what is bullshit intended to bamboozle lesser intellects (and to Cohle, that's everyone). I can't think of many actors who could pull off what McConaughey often does here: He effortlessly makes Cohle's wry, dime-store existentialism both fascinating and tragic.

I'm very tired of stories about Broken Men who come off as a composite of anti-hero tropes, but Cohle, in particular, is extremely specific in both timelines. He looks different and carries himself differently in the present and the past, but one of McConaughey's accomplishments is to make Cohle recognizably the same man, just more damaged and isolated in his later years. As is the case with Will Graham on "Hannibal," Cohle's problem is that he thinks too much and can't turn off his brain. When he spins a story or embroiders his fatalistic philosophy, you can't help but listen -- and you can't help but wonder if he's trying to convince himself more than anyone else.

I was talking about "True Detective" with Andy Greenwald, a critic I greatly respect, who is not nearly as keen on the show as I am. Among other things, he took issue with the drama's limited and predictable female roles -- and that is a valid point (you will not be surprised that Hart's wife is defined by her relationship with her husband and frequently comes off as a nag). Women in "True Detective" are scolds, sex partners or dead bodies, and while that's a TV trend that often frustrates me, the focus of this show is Cohle and Hart's difficult relationship and the exploration of Cohle's dark places. Those aspects of the HBO drama were usually very effective, even if I wish some aspects of "True Detective" didn't roam dangerously close to tough-guy cliches.

"True Detective" comes alive in the wide-open spaces, in its spare depictions of bayous and abandoned churches, tent revivals and littered parking lots. Yet this mystery may be most transfixing when its characters are trapped in small spaces. The scenes that had the biggest impact on me took place during interrogations and conversations, when the actors were displaying the kind of psychological intensity and nuance you find only in the very best dramas.

If it comes back -- and I bet it will -- "True Detective" will follow an anthology format: It'll have a new cast and new story each season. If its second incarnation gives actors and actresses of this caliber as much good material as McConaughey and Harrelson got here, this HBO series will remain, as it is now, essential viewing.