Without fail, the first question I am asked at any author event is: Are your books based on your real life? Over the years I have come to realize that no matter how satisfying fiction is, it becomes that much better when it actually happened. My answer, no doubt, disappoints: No, I do not use people or events from my real life. The occasional detail, yes: how could I not? But all of my novels are crafted by my imagination.

This year, however: a plot twist.

On June 10, my novel The Matchmaker came out. In this novel (SPOILER ALERT), one of my main characters battles cancer. It was Oscar Wilde who said, "Life imitates art much more often than art imitates life." A month before the publication date of The Matchmaker , I discovered that I am also entering this battle. I have been diagnosed with breast cancer.

I found the lump myself, while on my annual writing retreat to St. John. The lump was small and very hard, like a pebble embedded just under my skin. St. John doesn't have a hospital, and text consultation with a dear friend who is a nurse practitioner led me to believe it was probably a calcified milk duct or a cyst. I would wait and get it checked out when I got home.

Although the nurses could feel the lump, it did not show up on the mammogram. An ultrasound was performed, where the doctor said, "Well, it's not a cyst," meaning it was not filled with water. It would have to be biopsied.

The biopsy took place the following Tuesday and was performed by a doctor who had read all of my books, which I believed was a good omen. She assured me that 80 percent of all biopsies turned up benign. I was certain this would be the case with me. I had no family history, I had breastfed my three children for a year apiece without incident, I was healthy and ran 7-8 miles a day, I ate a lot of blueberries. During the biopsy, a "marker" was set into my breast, which was described to me as looking like the tip of a pen. I thought that was perfect: I was a writer with a pen tip embedded in my breast. I had a second mammogram following the biopsy, but even with the marker in place, the lump didn't show up on the film.

I waited eight days for the results. When the phone call came, I was running. The doctor asked if it was a good time to talk.

Two days later, I was at Mass General, meeting my surgeon, whom I immediately thought of as Elin Hilderbrand in a White Coat. She was my age, blond, the mother of four, and she wore Manolos. She described the lumpectomy she would perform: outpatient surgery, followed by 4-6 weeks of radiation. It was Userfriendly cancer. It was so easily dealt with I almost felt embarrassed.

But before I left the hospital, I had to have an MRI to make sure there was nothing else hiding. I was stoic in the loud, claustrophobic hour in the tube. I thought, Of course there's nothing else... I've already had two mammograms!

The Elin Hilderbrand-as-Surgeon called me the next day. The MRI had turned up three additional tumors in the right breast and one in the left.

Tomorrow, three days after the publication of my book, I will undergo a double mastectomy.

I have never been a particularly private person, probably because I live on an island that is 4 miles by 13, and my house has large windows that are three feet off the street, and everyone on Nantucket has always known my business, sometimes even before I have. I allow, indeed encourage, photos at my events. I tell people the designers of my clothes and of my shoes (duh, Manolo.) But it was a delicate and much-deliberated decision to disclose that I am sick. I have, after all, been dubbed "the Queen of the Summer Novel." Nobody wants to hear that the Queen has cancer. Readers want the Queen where she belongs -- in her beach chair scribbling away her next best seller as the gentle ocean waves lap at her feet.

I make a living telling stories, and yet my desire to tell the truth here is so overwhelming that it cannot be denied. Just like so many of my beautiful readers, I am facing a serious health crisis. I am anxious, I am scared, I have started crying every time my eldest son throws a strike from the pitcher's mound because life has changed in an instant and I fear, oh how I fear, I won't be around to see him pitch next year. My friends say, You will fight, we are here, you will beat this. And yet as anyone who has been diagnosed with cancer knows, we are all alone when it comes to our bodies. No one can alleviate the burden. It is solitary confinement.

I cannot help but draw parallels with the protagonist of The Matchmaker, Dabney Kimball Beech. I spent many months trying to put myself in Dabney's penny loafers, asking myself: What would it feel like to find out you had cancer? How would you react? Would you do things differently? Would you do things the same? I tell my audiences that I don't write from real life, and yet I had Dabney handle her situation the way I thought I would have. She is brave, she prays, she sets her affairs in order, she smiles, she cherishes the days she has left, and she is most worried for the people she is leaving behind.

I told myself that if I could write a character like Dabney, then I could be like Dabney. I would accept the fact that my body and its current failings were my own, and I would fight and I would smile and I would do everything in my power to live to write thirteen more novels and sit on my throne and let the ocean lap at my feet. I would see more strikes thrown.

My children, raised in the age of Twitter and Instagram, have created the hashtag #mamastrong when talking to their friends about my condition -- so at least I have managed to fool them. But having cancer has left me stranded in a landscape of confusing emotion. My mind goes everywhere, despite my best efforts to keep it positive. My reactions to my diagnosis have not been charming or admirable. I love my life; I don't want to die. I want to wake up and hear the birds and get my coffee. I want to drive my children to the bus stop. When I'm done enumerating the million reasons I want to live, I want to know why I got cancer. I lie awake in the middle of the night and think: What caused it? Chapstick? Advil? Veuve Clicquot? Airport security? The extra sides of mayonnaise?

I have come to grips, but only very recently, with the fact that I am not a fictional character whose emotions I can control. My story will have an ending, but it will not be me who writes it. I pray for the ending where I walk out of the hospital cancer-free, wearing a t-shirt over my new, surgically perfect breasts that reads #mamastrong. And it's the truth. 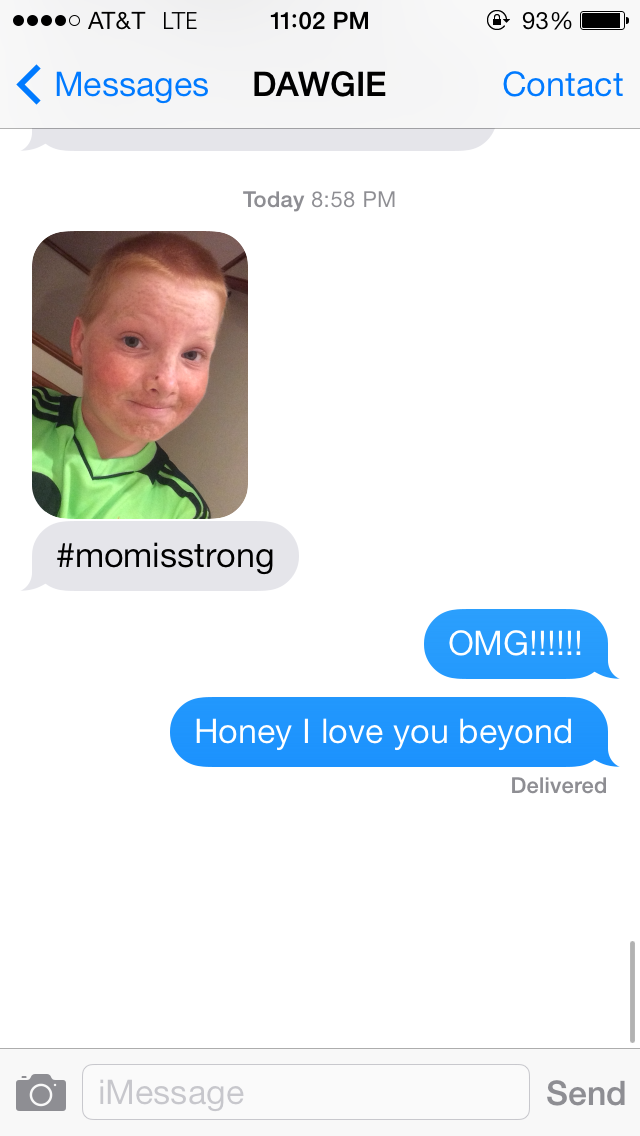