The 1940s and '50s weren't kind to people whose politics flirted with the far left, especially those in the Hollywood artist community. Writer Dalton Trumbo, Oscar-nominated for Thirty Seconds Over Tokyo, got caught up in the "Better Dead Than Red" hysteria. His story, his fight against Congress's House Un-American Activities Committee (HUAC) and Commie haters like John Wayne and powerful Los Angeles Times gossip columnist Hedda Hopper provides the backbone for this entertaining and witty historical bio/drama. 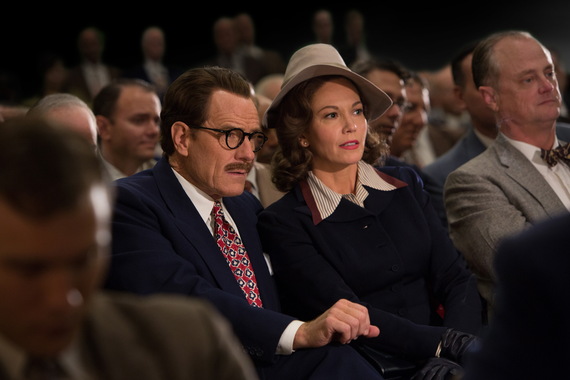 The colors are almost cartoonish, and with McNamara's witty dialogue, you often feel like you are watching a devil-may-care '50s sitcom, like an I Love Lucy episode. But in short order you realize that the stakes are high, the atmosphere oppressive and the demonic reign of right-wing terror is very sobering. You zero in on the tribulations of the victims as the lengthy (2h 4m) film unspools.

Dalton Trumbo (Bryan Cranston) is a wealthy and successful screenwriter. He's outspoken, clever and a family man: loved by his wife (Diane Lane) and children (Elle Fanning). He's friendly with fellow screenwriters, such as Arlen Hird (Louis C.K.), who aren't as wealthy as he is and express their apprehensions. Hird says, "You talk like a radical and live like a rich guy." Trumbo is never ashamed that his politics are left of center. Then in 1947, while relations between the U.S. and U.S.S.R. are frayed, the HUAC decides its duty is to root out communist sympathizers. They set their sights on Hollywood, investigating actors, filmmakers and screenwriters. Many in the film industry are scared to death they'll lose their careers if they don't turn others in for being commies. Some are called before congress to testify. Ten courageous souls refuse to give out names, and are not intimidated. Dalton Trumbo is one of the holdouts.

Trumbo is sentenced to prison where he meets a burly, intimidating convict Virgil Brooks (Adewale Akinnuoye-Agbaje, Pompeii). The writer does his time, and tries to pick up the pieces of his life upon his release. But he and other scribes are blacklisted and can't find work. Trumbo uses ingenuity to survive, writing scripts under pseudonyms for crappy B-list producers like Frank King (John Goodman). Trumbo is determined to avoid the glare and poison pen of his ultimate enemy, the wicked columnist Hedda Hopper (Helen Mirren) who wants to make sure the blacklisters never work again.

The scary, threatening hysteria that started in the 1940s didn't end until after the demonic McCarthy Hearings in 1954. It's a shameless part of America's past that we should never forget. That kind of witch-hunting continued years later when some would routinely question people's patriotism. In that way Trumbo is a very important film, a cautionary tale. Jay Roach's decision to keep humor in the mix makes this history lesson go down with a spoonful of sugar.

Cranston finds the sly comic elements in a character who uses devious ways to outsmart the draconian measures taken by the government and the suits who ran the studios. He is as animated, bright and intelligent as the real Trumbo must have been. Diane Lane is wonderful as his supporting wife and ditto Fanning as his daughter. Louis C.K. 's interpretation of the blue collar and dour writer Arlen Hird, whose life was not as financially blessed as Trumbo's, is perfectly droll. Helen Mirren is a scene-stealer. She sheds light on a gossip columnist who had unrestrained power, back in the day. This generation cannot possibly fathom Hopper's evil grasp over Hollywood and the media. Today there is no Hedda Hopper, no Walter Winchell. That bigoted breed of journalists died off.

Sometimes we take our constitutional rights to freedom of speech and freedom of assembly for granted, until films like Trumbo remind us how precious they are. Also, discovering which Hollywood heavyweights (John Wayne, Kirk Douglas, Otto Preminger, Edward G. Robinson) were on the right or wrong side of history is a revelation.