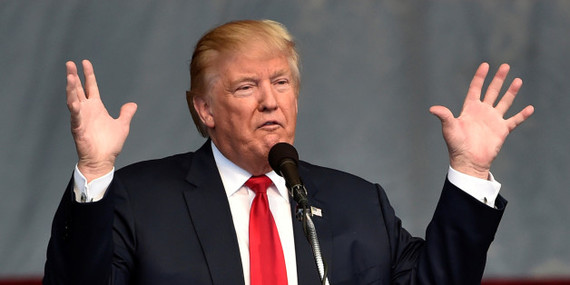 IT'S BEEN TWO MONTHS since the U.S. presidential election, and there are just a couple of weeks until the inauguration. Can we at least agree on a couple of central points?

-- Donald Trump won the election by meeting the conditions set forth in the U.S. Constitution, and he will become president when he is sworn in on January 20.

-- At that moment, he will become entitled and empowered to take any executive actions permitted (or, at least, not expressly forbidden) by the Constitution, applicable court precedents and duly enacted federal statutes.

-- He also will have the ability to propose new legislation to Congress, support or oppose legislation proposed by others and sign into law or veto bills passed by both the House and Senate. The laws that emerge from this process could affect virtually every aspect of life for 320 million Americans and millions more around the world.

What Trump will do with this power and authority − beyond authoring or approving Twitter messages strewn with mistakes and continuing to act like a pathetically sore winner− is far from clear.

Early in the campaign, Trump's lack of knowledge of, passion for or even curiosity about national policy was glaring. He didn't become any better informed after he secured the nomination and started shopping for a vice-presidential running mate. Indeed, at one point in that process, Donald Trump Jr. reportedly approached a senior adviser to Ohio Gov. John Kasich (one of the many Republican competitors Trump defeated), saying that Trump's veep would be in charge of domestic and foreign policy, while a President Trump would handle "Making America great again."

Sure enough, at this early pre-inaugural point, Vice-president elect Mike Pence, not Trump, seems to be the go-to guy for face-to-face activity and explanations approaching coherence when it comes to the future administration's policy positions and actions.

The Role of Government

Based on the broad positions and actions taken so far − and considering the track records of people nominated for key administration positions − Trump's presidency is shaping up to be something close to the exact opposite of what marketing man Trump sold it as. That is, it will not be inclined to truly address the common needs and shared interests of ordinary Americans who are struggling to get ahead and feeling overwhelmed in a complex modern society.

Whether any of this even interests Trump is almost beside the point. With him in the White House, with anti-government Republicans controlling both houses of Congress and with the judicial appointments his team is in a position to make, the government of the United States of America under Trump seems likely to have as little to do as possible with the following:

ENSURING FAIR TREATMENT for men and women at work; seeing to it that the ill, the injured, those infirm with age and people just trying to maintain their health have access to affordable medical care, regardless of their financial status; protecting the air and water we all breathe and drink, the land we all inhabit and the unique natural wonders that bless our country and revive our spirits; enforcing strong rules against financial rip-offs and requiring full disclosures and comprehensible documentation for financial transactions including mortgages, loans, retirement accounts and credit card bills; providing national assistance to local schools working to improve quality in public education at the primary and secondary levels and safeguarding honest and affordable vocational and post-secondary educational opportunities; underwriting unbiased research into science and health issues; overseeing the safety, effectiveness and marketing of medicines; rewarding − and, when necessary, requiring − professionalism in law enforcement and the administration of justice for all people regardless of economic status, geographic location, age, gender, race, national heritage or sexual orientation.

As Trump and his team begin to exercise the power they acquired in November's national and state elections, it will be fascinating to see which Republicans, career federal civil servants, and groups and individuals in the private and non-profit sectors find the will and courage to oppose them.

Any rebels surely will find themselves up against some formidable and distinctly ugly weaponry. The arsenal wheeled out during the campaign included, for example, the fantasy-based, no-such-thing-as-facts notion of truth that proved to be a depressingly effective tactic. Current and former Trumpites leave little doubt that the approach will be at the ready for the presidency as well.

Then there is Trump's astonishing capacity for lying, calculated vagueness and convenient incoherence, and the slash, burn and smear media tactics seen throughout the campaign, tactics that remain all too available to Trump and his chief White House strategist, Steve Bannon, the former campaign chairman and former head of the notorious Breitbart News Network.

As to what Trump really is interested in, it might be worth taking a clear-eyed look at his gushing and much ridiculed admiration of Russian President Vladimir Putin. Trump also has nominated Rex Tillerson, CEO of the multi-national energy giant Exxon-Mobil, to be secretary of state. Tillerson has close personal and professional relationships with Putin and Putin ally Igor I. Sechin, who heads Rosneft, Russia's state-owned oil company. All this suggests the possibility of much closer contact between American government power and the energy exploration, production and transportation industries that Trump has promised to relieve of what should be cost-of-doing-business regulations, including those requiring environmental protection, that supposedly eat into profits.

Reports alleging that Putin has engaged in massive and untraceable corruption for personal enrichment, mainly through secret payment deals with Russia's state energy industries, have been around for years. One such report published by the Guardian newspaper in 2007 estimated Putin's secret net worth at a shocking $40 billion, all hidden through offshore accounts, shell companies and cut-outs. Putin has denied the reports. Trump's 2016 net worth was estimated by Forbes magazine at a comparatively paltry $4.5 billion.

A Man of Honor?

Trump's victory, however, does not give him the right to legitimize the extremist views of racist white supremacists, anti-Semites and religious and ethnic bigots who were drawn to and enthusiastic about his candidacy.

When asked about these supporters during the campaign, Trump first tried to duck the issue, then claimed to be unaware of a problem. He finally made vague statements that he "disavowed," but failed to specify what and/or whom he was disavowing and later made perplexing comments about not wanting to "energize" them. Not surprisingly, his ambiguous responses encouraged the extremists, and when Trump won the election, they expressed delight that someone they consider sympathetic to their cause is about to become president.

Some of the members of these groups have lately taken to describing themselves as "white nationalists" and to hiding behind a sanitized brand identity − "alt-right" − which looks and sounds so much more genial than racist, supremacist, bigot and anti-Semite.

Marketing aside, they believe that the United States was "a white country designed for ourselves and our posterity," as one speaker told followers at a meeting in Washington on Nov. 21. "It is our creation, it is our inheritance, and it belongs to us." He then invoked anti-Semitic themes used by the Nazi regime in Germany during World War II to dehumanize Jews destined for extermination: "One wonders if these people are people at all," he said, "or instead, soulless golem animated by some dark power...."

On January 20, Trump will swear an oath before God and the American people to preserve, protect and defend the U.S. Constitution and the Bill of Rights. It is the principles and ideas enshrined in our founding documents that have made our country unique among nations and that guarantee, not coincidentally, the extremists' right to hold, express and promote their vile notions. In turn, the extremists have mocked and dismissed them as "some legalisms."

Trump has a duty as president of the United States to publicly and clearly denounce the views of the extremists who support him as immoral, indecent, unacceptable and un-American. Indeed, he must do this if he is to be considered a decent human being and a man of honor. He is either against them or he is with them. He can't have it both ways.

Trump's inaugural address would be the right time to let the American people know which it is.

A version of this column originally was published by the St. Louis Jewish Light.