It is now strikingly obvious that bodily fluids, especially women's bodily fluids, drive Donald Trump up the wall. This might look like behavior in the script for a fictional film called, "Frat Guys Talk Women," but it's not. It is a profound theological problem.

Trump's revulsion at women's bodily fluids is very marked, from breastfeeding lawyers needing to take a break to pump breast milk ("You're disgusting," he lashed out), to even the possibility that Megyn Kelly might be having her period as the reason for her vigorous questioning of him. "You could see there was blood coming out of her eyes, blood coming out of her wherever."

And more recently, Trump found the fact that Hillary Clinton took a bathroom break during the Democratic Debate "disgusting". 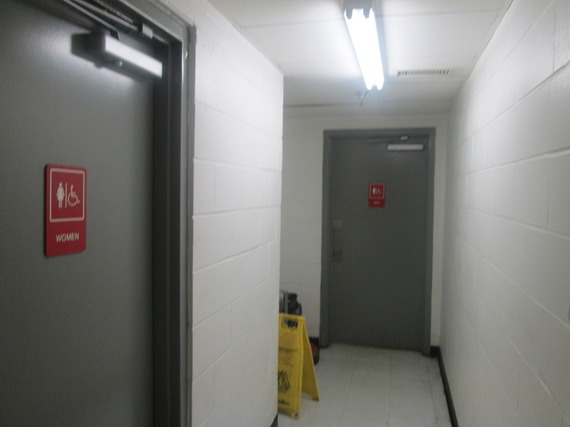 Even though Bernie Sanders admitted he peed too, Donald was grossed out at Hillary. It also puzzled Sanders (a reasonable person) that it had somehow escaped Donald how women's bodies work.

But Sanders is not counting on the powerful influence, as evidenced in the history of Western philosophy and theology, that women's bodily fluids have been thought to illustrate the unruly, even monstrous chaos that threatens reason and order.

As I have written in Women's Bodies as Battlefield: Christian Theology and the Global War on Women, women's bodies are regarded repulsive, sickening, ghastly, filthy, and yes, disgusting. Women, according to Aristotle in "The Generation of Animals," are a "deformity." They are gross, monstrous, and "fishy."

Tertullian, an early Christian theologian, summed up what he regarded as the putrid nature of women's bodies when he described women as a "temple built over a sewer." Tertullian was thoroughly familiar with Greek philosophy, though he mostly rejected their views on metaphysics. But in regard to women, the Aristotelian strain of misogyny seeps through.

In Aquinas, Aristotle comes back full bore, as women are "defective and misbegotten" and thus unfit to rule. They must be ruled.

All of this revulsion is rooted in contempt for the body and its functions; women's bodies are, well, so bodily obvious. Their bodies make milk and blood, as well as urine and stool. All this evacuation comes to symbolize the deep contempt for the body, sexuality and materiality that, at the end of the day, is a fear of death, the ultimate outcome of materiality.

Actually, women's bodily fluids are not disgusting and a harbinger of death, they are life. Powerful life.

Menstruation is a sign of fertility, as it is the discharge of bloody mucous that gathers in the womb as an egg is released. If the egg is not fertilized, the nutritious lining of the uterus is not needed and it is released. Milk begins to flow through the breasts after pregnancy to feed newborn babies.

But men and also women have been taught, in a deeply patriarchal religion and culture, that this is all just "disgusting."

When I first taught History of Religions at a women's college, it quickly became obvious that these undergraduates had learned to loathe their women's bodies and they were very skeptical about religions that celebrated women's bodies and fertility. Periods were the "curse," and the fact that I was breastfeeding was 'kind of gross,' especially if I had a milk letdown in class.

Fortunately, there are other profound influences on Christianity.

In Isaiah 49:15 God is compared to a nursing mother

God: "Can a woman forget her nursing child, or show no compassion for the child of her womb? Even these may forget, yet I will not forget you."

God: "For a long time I have held my peace, I have kept myself still and restrained myself; now I will cry out like a woman in labor, I will gasp and pant."

"But I have calmed and quieted my soul, like a weaned child with its mother; my soul is like the weaned child that is with me."

In the New Testament, in Matthew 23:27 and Luke 13:34 Jesus images himself as a Mother Hen

Jesus: "Jerusalem, Jerusalem, the city that kills the prophets and stones those who are sent to it! How often have I desired to gather your children together as a hen gathers her brood under her wings, and you were not willing!"

In Luke 15:8-10 Jesus teaches about God as woman looking for her lost coin.

Jesus: "Or what woman having ten silver coins, if she loses one of them, does not light a lamp, sweep the house, and search carefully until she finds it? When she has found it, she calls together her friends and neighbors saying, 'Rejoice with me, for I have found the coin that I had lost.' Just so, I tell you, there is joy in the presence of the angels of God over one sinner who repents."

All of these biblical sources are important, but in different ways. The maternal images of pregnancy and lactation as well as love are a crucial antidote to a 'Trump-ian' like revulsion at female bodily functions.

But what may be even more important is the linking of female images for God and justice-making, lament and the unceasing character of God's call and promise.

Here's my theological claim: human bodily fluids, both female and male, are profoundly related to God's justice-making in this world. Menstruation and ejaculation are fertility, the renewal of the human race, but also profoundly symbolic of the physical churning that that renews in all of nature. Lactation is feeding, and feeding the world is at the core of what we as humans need to understand as indispensible to justice-making. Even our arrangements of restrooms is a justice issue, as human sexual identity is far more varied and interesting than just the binaries inscribed on most restrooms signs. In addition, peeing and pooping are bodily functions that are clearly part of cleansing and restoring the human body and all life. Cleansing helps healthy renewal happen.

That is my theological proposal.

Philosophically, it might look like this: instead of philosopher Rene Descartes's assertion, "I think, therefore I am," we should realize, in point of fact, "I pee, therefore I am."

The deeply physical way creation works, its gender flourishing, its renewing and restoring, is a wonderful thing.