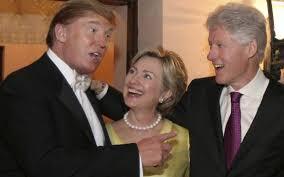 The Presidency of the United States is not an entry level job which makes Donald Trump thoroughly unsuitable as a candidate.

He is not a political leader, but the CEO of a sole proprietorship who has never had to answer to shareholders, the public or anyone. Trump Enterprises, where he honed his management skills, is the private sector equivalent of a dictatorship. He knows nothing about running a democracy where consensus-gathering and vision, not bullying or half-baked policy ideas, work.

So Donald, you're fired.

Frankly, the same applies to most of the others such as Huckabee the preacher or Carson the surgeon.

Currently, the field contains only two experienced and qualified finalists - Bernie Sanders and John Kasich. This is because they have both completed intensive apprenticeships.

Kasich has held elected office - federally in the House for nine terms then as Governor of Ohio for two terms - since Marco Rubio was 12 years old or in 1983.

Sanders has been in politics - as Mayor of Burlington Vermont then in the House and Senate in Washington for decades as an independent - since Ted Cruz was 10 years old or in 1981. Before that he was a civil rights activist.

By comparison, Hillary Clinton has elected experience but has never been CEO of a government. She was a CEO's spouse for decades until he left office in disgrace. Then she was elected in 2001 as a Senator for eight years and appointed as Secretary of State for four years.

Being a Senator does not prepare anyone to run a government in and of itself. Being a Mayor or a Governor does. That doesn't mean some Senators haven't been good Presidents, but a Senator is really a relatively isolation member of the country's most exclusive debating society and think tank. It can be a great training ground for policy development but leadership is another matter.

Hillary worked hard as a Senator but now she and her "First Lady" Bill Clinton appear to have again skated close to the ethical edges of public life. There's a nasty book about their obscene speech fee incomes and subpoenas over emails. So far this is only smoke no fire but once again their behavior is unacceptable distraction going forward.

By contrast, Kasich and Sanders are not only relatively unblemished but have hands-on experience. Running a municipal or state government involves dealing directly with the public every day, chairing fractious council or legislatures, balancing interests, finding compromises, devising policies and, at the same time, supporting development and employment, then balancing the books. It's about leading people. Lots of them.

This is why both are, compared to the others, less partisan, ideological and narcissistic and more inclusive and pragmatic in their attitudes.

"I cannot do this alone," says Sanders repeatedly during his rallies. He realizes that he is not the candidate but is spearheading an anti-corruption and egalitarian movement that has caught fire and cannot be smothered.

Kasich, on the other hand, refers to experience with his line that his campaign and candidacy "is the little engine that can".

Kasich is supported by two PACs, but has promised to try and remove big money from politics. "I think we ought to go back to small-dollar giving. The idea that people can operate [with huge campaign contributions] this way is wrong," he has said.

Sanders, on the other hand, is blunt. "The campaign system is corrupt and amounts to legalized bribery," he says.

Ironically, Trump is a member of the "billionaire class" and the only one that has dealt the knock-out punch during an August GOP debate. He bragged that he deliberately gave money to politicians so he could later get favors from them. He said his donations to Hillary Clinton gave her "no choice" but to attend his last wedding a few years ago with Bill.

If true, plus more, both Trump and Hillary should be rejected and Sanders or Kasich supported instead. It may be too late for them and that's a tragedy.