Here is what Donald Trump's own campaign advisors say about their candidate: 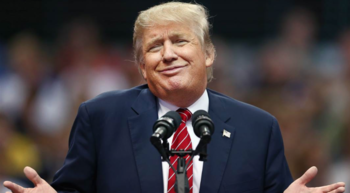 Donald Trump is a lazy, undisciplined, and erratic individual, who is unwilling to do the hard work necessary to prepare for important responsibilities, incapable of acknowledging and correcting his own errors, and unable to focus in a sustained way on even the most vital topics.

That's not a direct quote, but it is an entirely fair and accurate summary of the observations made anonymously by members of Trump's campaign team in this week's New York Times. Some notable excerpts:

Campaign advisers to Donald J. Trump, concerned that his focus and objectives had dissolved during the first presidential debate on Monday, plan to more rigorously prepare him for his next face-off with Hillary Clinton . . . Whether he is open to practicing meticulously is a major concern, however, according to some of these advisers and others close to Mr. Trump.

While analysts from both parties and several focus groups declared Mrs. Clinton the winner of the debate, Mr. Trump tried to claim that title for himself on Tuesday, citing unscientific online surveys, and told his advisers that he believed he had done well.

There were early efforts to run a more standard form of general election debate-prep camp . . . [b]ut Mr. Trump found it hard to focus during those meetings, according to multiple people briefed on the process who requested anonymity to discuss internal deliberations.

The team had primed Mr. Trump to look for roughly a dozen key phrases and expressions Mrs. Clinton uses when she is uncertain or uncomfortable, but he did not seem to pay attention during the practice sessions.

Again, these are not attacks from Hillary's camp; these are the damning assessments of Trump's own folks, who seem to recognize all-too-clearly that their candidate has the attention span of a toddler on a sugar rush.

Unfortunately, if prepping for a 90-minute debate is hard, it's nothing compared to actually serving as President. When proposing multi-trillion dollar budgets, making life or death military decisions, negotiating complex legislative agreements, or absorbing the intricacies of public policy, it's probably useful to have an ability to focus, work hard, listen to advice, and learn from mistakes.

We long ago reached a point at which it became difficult to keep track of the various reasons Trump is unfit for high public office. One almost needs a chart with categories and subcategories to sort it all out.

But even if you're somehow okay with Trump's racist appeals, shady business practices, and serial dishonesty (as his campaign leaders presumably are) it's clear that on the most basic level of capacity and skill set, this dude just ain't up to the job.

No candidate is perfect. And when you work on a campaign in a leadership position, you inevitably get an up close and personal view of your candidate's flaws. There has probably never been a campaign manager who hasn't privately laughed at, despaired over, or cursed out their candidate at one point or another.

But through it all, you really believe. You believe that the man or woman for whom you are busting your butt morning to night can make the world a better place. That's what distinguishes politics - despite all its ugly, commercial, and mercenary aspects - from selling breakfast cereal or magazine subscriptions. You're not just hawking a product for a buck. You're working to do right, however you perceive right.

So here's the question for all the Trump campaign folks quoted anonymously in the Times: when your up close and personal view tells you that your candidate is lazy, delusional, erratic, and unfocused, how on Earth can you work overtime to put him in the Oval Office?