JANESVILLE -- Donald Trump landed in Wisconsin Tuesday, turning out a huge crowd in Janesville, Paul Ryan's home town, just because he could. 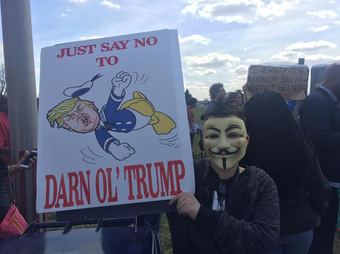 According to Politico, Trump chose the location hours after Speaker Ryan chastised him for the tenor of his campaign. "Our political discourse did not used to be this bad and it does not have to be this way now. Politics can be a battle of ideas not a battle of insults," said Ryan.

Trump responded by issuing 5,000 tickets for a 1,000 seat venue at the Janesville Holiday Inn, generating a huge crowd. There were as many Trump supporters outside the hall as inside.

Hundreds of young people were also there to protest the candidate with a strong rejection of racist rhetoric. With dozens of vendors hawking goods, there was a carnival-like atmosphere to the event unlike any other.

On Monday, Trump was ambushed by the state's far-right radio talkers Charlie Sykes and Vicki McKenna, who in separate interviews demanded that Trump apologize for attacking Cruz's wife. The spectacle of the two trash-talking radio hosts demanding "civility" from Trump had many here rolling their eyes.

On cue, Walker endorsed Cruz Tuesday morning citing among other factors the fact that he and Cruz, who has been accused by the tabloid National Enquirer of multiple affairs, were both "preacher's sons." Walker support among Republicans remains strong, but his approval rating has sunk to 40% one of the worst in the nation.

On Tuesday afternoon, Trump got a chance to return the favor.

"He certainly can't endorse me after what I did to him in the race, right?" Trump said, referencing his attacks on Walker's record before he dropped out of the race last fall.

Trump then read a long list of economic data points to make the case that Walker has failed: total state debt $45 billion, 20,000 fewer people in labor force than 7 years ago, 800,000 food stamp recipients; middle class hit hard due to loss of manufacturing; 15,000 jobs lost to NAFTA and more.

"He's not doing such a good job, Scott Walker, but he's convinced you there's no problem."

"Both Walker and Cruz want TPP -- that would hit Wisconsin so hard," said Trump referencing the Trans-Pacific Partnership, a trade deal pending with 12 Pacific rim countries and he mocked Walker for his fondness for biking clothes. "He doesn't look like a biker to me," said Trump.

Then Trump segued into a more personal story about Walker. "He came up to my office about a year ago... I supported him I gave him money... I didn't know him well, but he was fighting, he was always fighting... and I gave him a lot of money. He gave me a plaque, a beautiful picture. I never read it. I just had my girl find it... she found it under a pile of other plaques. So I will bring it here, I will be here the whole week. Because if we win Wisconsin it will be pretty much over." 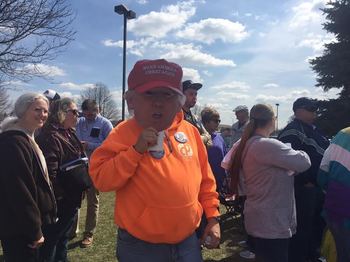 It is not clear if Trump is referencing a $10,000 check he gave to Walker for his reelection in 2014 or the $15,000 check he gave secretly to Wisconsin Club for Growth to aide Walker during the 2012 recall election. The secret donation came to light in the course of the "John Doe" criminal investigation of Walker, currently being appealed to the U.S. Supreme Court, and his top campaign aide RJ Johnson for potentially illegal coordination with allegedly independent groups. Wisconsin Club for Growth has spent millions over the years in support of the Wisconsin GOP and is as much of the Wisconsin political establishment as its pet project Scott Walker.

Trump had more to say about Club for Growth calling it a "crooked outfit." Trump said that a representative of Club for Growth had met with him and written to him asking for $1 million and now the group is running ads against him in Wisconsin.

"Do you guys like Paul Ryan?" he asked the crowd. Ryan has represented Janesville since 1998. To boos and yells, Trump responded "Really? I was told not to criticize him here. He is the Speaker, he is very nice. Wow, are you sure you are all Republicans? Are you mostly conservatives?"

They weren't all Republicans. Many of the people CMD spoke to outside the venue called themselves independents, one was torn between Trump and Sanders and some were at the first political event of their lives. Many had completely contradictory views on issues such as abortion.

Wisconsin is an open primary state so by campaigning against the establishment Trump hopes to appeal to Independents, Democrats and the disaffected.

Dianne from Janesville told CMD: "I like Trump because he is his own man, not owned by anyone. He brought me out. I am not a regular voter." On the whole she had little faith in typical politicians. "You know people get elected, they make promises, and still our country is falling a part." How is it falling apart? "Terrorism, it's a big issue and its getting worse."

She wasn't the only person to talk about terrorism. Many Trump supporters placed it on their list of top issues and one spoke to me at length about the "22 ISIS camps already in America" being ignored by the main stream media. He had heard it on an evangelical radio show.

"No Hate in Our State" Supporters and Protesters March Outside

Many Trump supporters outside the venue were not happy with the state of the nation. John Paulby wants a wall with Mexico to stop heroine, cocaine, and terrorists, but his real beef was with immigrants who he believed received food stamps, housing, and healthcare "for free." He carried a sign which read "entitlement suckers will keep sucking entitlements."

John Green was there to advocate for AARP and strengthening Social Security.

Victor Procopio is voting for Trump because of borders, babies (abortion), and business (jobs). "Obama gave our auto plants to China. Trump will bring jobs back from all over the world." Chuck from Janesville was also worried about a list of items including what he called "Ryan's trade deal." The TPP, the Trans-Pacific Partnership, he said would allow foreign workers to come to the United States and get a fast track to citizenship. "Ryan was one of the architects of the deal, he is a globalist. At least Trump isn't bought."

Trump supporters were separated by a line of police from a vibrant and diverse crowd of young protesters holding signs such as "You can't combover racism," "I am not a criminal, I am a dreamer," "Trump empowers hate," "Trump leave our state, and take our Governor with you," and "Down with this kind of thing." It was notable that the protesters were not lead by Wisconsin union leaders, but by young people in their twenties and teens many concerned about racial justice and LGBT rights.

"Build communities, not walls" was a frequent chant.

Six protesters committed civil disobedience and were charged with disorderly conduct and resisting arrest after they locked themselves down in the hotel lobby the night before demanding that Holiday Inn cancel the event. A number of the protesters returned to speak to the crowd through a bull horn and urge them to lead in their communities in the fight against discrimination of all stripes.

"Z!" Haukeness explained that the goal of the action was to shut down hate speech and racist rhetoric that can have consequences. He pointed out that two Hmong men and a Puerto Rican man were shot had been shot and killed in Milwaukee recently. Racist rhetoric can "embolden people" and lead to this type of anti-immigrant violence he said. He called it a "Trump effect."

Democratic State Rep. Melissa Sargent was there to support the protesters "I want young people to know that some Wisconsin policymakers care about them whether they are born in Mexico, worship at a Mosque or have black skin."

While there was a heavy police presence in Janesville, the crowd was boisterous, but largely peaceful. In an ugly incident towards the end of the day, a teen-age girl was groped and when she punched the man who did it, she was pepper-sprayed by someone who was not law enforcement.

On Wednesday March 30, Trump will be in DePere, Appelton, Green Bay, and Wausau taking nothing for granted.

You can see the full Trump speech here.