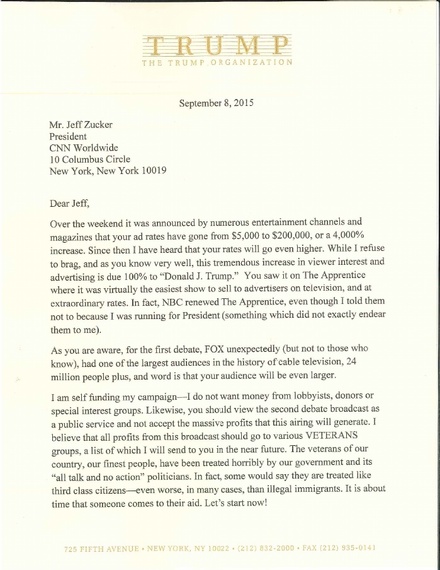 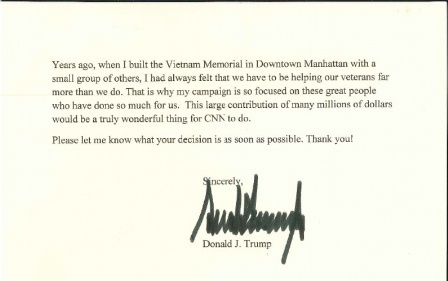 If I were Mr. Zuker, here is how I would respond to Trump's challenge:

Thank you for your open letter to me dated September 8, 2015. You are always full of... surprises.

I was surprised by your statement that "While I refuse to brag..." Correct me if I am wrong, but I do seem to recall some sort of bragging by you in the past. Also, this might be contradicted by your statements following your refusal to brag. It does appear that you were boasting just a bit. I had not realized that "The Apprentice" was the "... virtually the easiest show to sell to advertisers on television, and at extraordinary rates." I haven't done any fact checking on this, but I will take your word for it. I know you would never exaggerate.

I was pleased to see that you are so very concerned about our veterans, who certainly deserve the respect and support of all of us in a grateful nation. But again I was surprised by this, particularly in light of your past comments about Senator John McCain, "He's not a war hero. He was a war hero because he was captured. I like people who weren't captured." It seemed to me that this was rather demeaning of veterans who became prisoners of war.

I am confident that your suggestion that we donate our profits from the upcoming GOP debate to "various VETERANS groups" of your choosing is NOT motivated by self-interest. I say this because you would not be personally benefited by any such contribution. I know that your motives are pure because you are not a veteran and never served in the military. In fact, you sought and obtained multiple student deferments followed by a very convenient medical deferment. I trust you have fully recovered from the condition that was the subject matter of your medical deferment.

Here is my counter-proposal to you. CNN will donate our profits from the debates as you have demanded on two conditions: 1) That you personally match our donation, and 2) That Fox News does the same. Under my suggestion, the veterans groups would receive triple the amount you have required, which we can all agree would be a wonderful result.

Please let me know your decision as soon as possible. Thank you!

P.S. As the head of a news network, I am curious to know how much you have donated to veterans groups (or other charities) in the past.