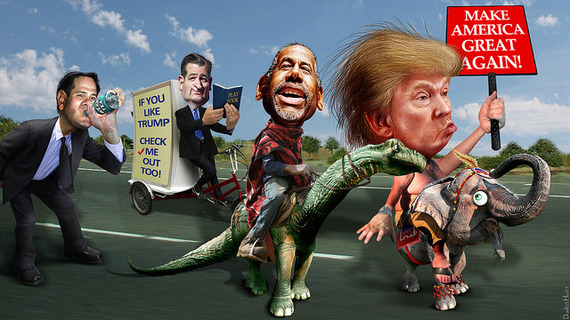 Setting new records can be--to use a word that has dominated the GOP presidential race--great. This one? Not so much. The year 2014 had set a new record for the highest average temperatures ever recorded here on planet Earth. Then along came 2015.

But it's not just that we've set a new record two years in a row. Normally, the difference between the average temperature from one year to the next is measured by a couple of hundredths of degrees Fahrenheit. Two-hundredths of a degree looks like this:

The average temperature in 2015 was not only the highest on record, but it blew the competition away. How much hotter was 2015 than 2014, the second-hottest year ever? The National Oceanic and Atmospheric Administration says it was 29-hundredths of a degree Fahrenheit hotter, or:

Virtually identical results came in from the other organizations that measure global temperature, including NASA, the Japan Meteorological Agency, and the UK's Met Office. You might think that the only question that remains after the publication of this data is: What are we going to do about it? You'd be wrong.

Republicans and Democrats take, shall we say, different approaches to the matter of climate change. The Democrats, as evidenced by the discussion in last week's debate, are in agreement. The moderator, NBC Nightly News anchor Lester Holt, didn't ask whether climate change was happening, or whether we need to do something about it. He asked the candidates how they would "convince Americans that the problem of climate change is so urgent that they need to change their behavior." The candidates themselves, in other words, did not need convincing. One candidate, Bernie Sanders, got off the line of the night when he all but facepalmed himself on national television:

It is amazing to me...that we have a major party, called the Republican Party that is so owned by the fossil fuel industry and their campaign contributions that they don't even have the courage, the decency to listen to the scientists. It is beyond my comprehension how we can elect a president of the United States, somebody like Trump, who believes that climate change is a hoax invented by the Chinese. And no, Bernie wasn't kidding.

Trump tried to laugh it off the day after the Democratic debate, saying he was only joking. For those not in on the joke, he's also referred to climate change as a "hoax," a "canard," and a "con job," as well as dismissing it as "non-existent," "mythical," and--in a way no scientist could refute--as "bullshit!"

Then there's Ted Cruz. In an October 29, 2015 interview with Glenn Beck, Cruz declared: "Climate change is not science. It's religion." In December, Cruz convened a Senate subcommittee hearing titled "﻿Data or Dogma? Promoting Open Inquiry in the Debate over the Magnitude of Human Impact on Earth's Climate." The hearing was a joke, as Cruz invited "experts"--who happen to be on the payroll of the coal industry--to come in and lie about climate change.

Many of the alarmists on global warming, they've got a problem because the science doesn't back them up. In particular, satellite data demonstrate for the last 17 years, there's been zero warming.

Cruz has offered similar statements over the years. The Washington Post fact-checker issued Cruz three Pinocchios out of four on the matter. They would have given him four out of four, only he had backtracked slightly in his most recent statement. Instead of saying there has been zero or no warming for 17 years--as he had done repeatedly--Cruz hedged a bit and said there's been "no significant warming." I don't consider that to be "significant" progress, do you?

It's worth noting that if you combine the bombast of Trump and the fact-free "science" of Cruz into one big lump of coal-stained crap, you get the biggest blowhard of them all, who said this just four days after Cruz spoke to Glenn Beck:

RUSH LIMBAUGH: You know, look, we're actually kind of engaged in a fruitless exercise here. Because, look, there is no climate change. There isn't any. I mean not man-made. There's no CO2 greenhouse gas, the temperature hasn't gone up in 18, 20 years....So you see, the real game here is to, once again, diminish and attack capitalism and get everybody -- or as many people as you can aligned against that and use up here this nonexistent hoax of climate change....

Then there's the concerning possibility that voters will fall into the trap of thinking that, well, Trump and Cruz are the extreme ones, but there are still so-called sane Republicans like Marco Rubio who have a more reasonable take on climate change. However, at the New Republic Rebecca Leber characterized Rubio as "the most dangerous GOP candidate on climate" because he has made clear that, even if climate change is real, he rejects the idea that our country should--or even can--do anything about it.

Moreover, Rubio has flip-flopped dramatically on climate change over the years. In 2008, he supported the creation of rules that would restrict carbon emissions--i.e., cap and trade. By last April he was questioning the basic science of climate change itself, offering this mealy-mouthed attempt to placate the anti-science right wing without going whole hog into the denial camp: "Humans are not responsible for climate change in the way some of these people out there are trying to make us believe." Last January Rubio (and Cruz) voted "No" on a Senate amendment that acknowledged the "significant" effect human activity has had on climate change.

In case anyone still cares, Jeb Bush and Chris Christie have also moved to the right on the issue. Whereas both once accepted facts and science over hokum, they've recently gone squishy on how much impact, if any, human activity is having on the climate. You don't care about them? Don't worry, neither do Republican voters.

The point is this: It is almost certain that the Republican Party will nominate someone who rejects science, rejects facts, rejects truth. Given that we're talking about a party whose economic philosophy rests on the fiction that tax cuts for the rich actually increase government revenue, we probably shouldn't be too surprised. Either way, those of us who do believe that facts matter--that ensuring our grandkids and their grandkids have an inhabitable planet matters--had better be prepared to fight. And win.