You can find more satirical news stories like this on The Political Garbage Chute every day.

WASHINGTON, D.C. -- Within hours of being confirmed, Secretary of Education Betsy DeVos, with Sub-President Donald J. Trump by her side, announced a new educational reform program called "Every Child Left Behind." 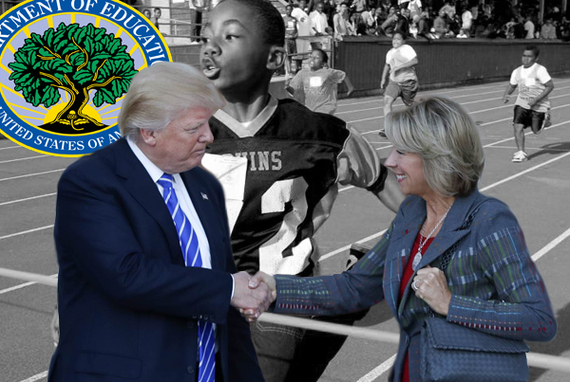 "It's a new day in America," DeVos said as she took to the podium, "and it's a new era in American education. We're going to privatize every last drop of it that we can get away with. And as such, the reality that American parents will have to grapple with is that there just won't be enough money to keep both corporate profits up and to educate their children so fully."

Every Child Left Behind is designed to, in DeVos' words, "truly level the playing field." It will "ensure that every child is treated the same" and will "have the same exact dearth of opportunities as their friends and neighbors."

"By completely decimating the public education system," DeVos said, "we can then rebuild it. Or rather, not rebuild it. We'll just put something corporately-backed and controlled in its place. Then, we'll have the best, most competitive educational market ever. But you can rest easy knowing every single child in this country will have to pony up the dough to get a good education. We will not be picking winners and losers."

Secretary DeVos explained that in her and Sub-President Trump's view, "kids have gotten far too used to getting stuff for free." She said that "no one is entitled to someone else's labor" and that it's time to "stop stealing from teachers." Though, she did say that there would be "far, far fewer teachers" once their unions were made illegal.

"We'll have about 300 kids per teacher," DeVos said, "because the working class education doesn't need to be all that great, right? We just need the plebs to make the widgets. Not to ask questions. Making sure they get the bare minimum attention from an instructor is really key to keeping kids as minimally educated as possible."

DeVos did say that one group of children would be exempt from most of the changes.

"No, not special needs kids," DeVos said, when asked "those kids won't even be going to regular schools anymore. We'll just chuck them into those big, roll-off dumpsters you see at construction sites everyday. We'll tell them they're going on an adventure in a big, scary, metal cave that smells like hot garbage. Win-win, really."

With Sub-President Trump beaming beside her, DeVos told the reporters which group of kids will not be subject to the reforms.

"Oh, none of this applies to rich kids," DeVos said, "Their parents of course have enough money to take care of any and every problem they face."

Secretary DeVos was the first cabinet appointee in our nation's history to need the tie-breaking vote from the new Vice-President to pass confirmation.