LAKE ADOLPHUS, FLORIDA -- Just a day after Donald J. Trump raised eyebrows and alarm by asking his supporters at a rally in Orlando to raise their right hand and pledge to vote for him, Trump told reporters he was "trying to make good" and "calm everyone's tits" by giving everyone at a rally in another Florida town free, brown Trump campaign t-shirts. 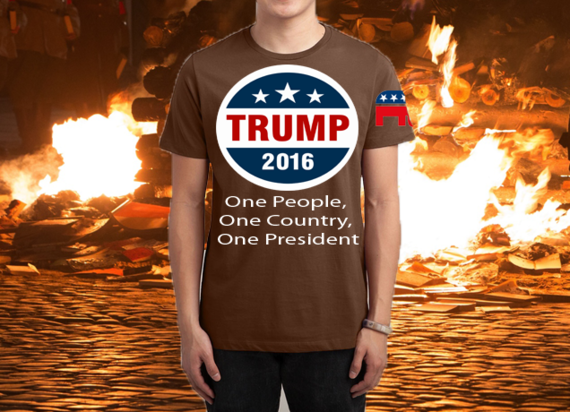 Speaking to a massive crowd, Trump railed against China, told them he'd build a giant wall on the southern border, force Mexico to pay for that wall, and build "the finest, yoogest Muslim-only camps the world has ever known." Then, he called to the sides of the stage and two bikini-clad women started firing t-shirt cannons like those that are used at monster truck rallies and football games to distribute thousands of brown t-shirts with the slogan, "One People, One Country, One President." Other t-shirt slogans included, "Trump commands, we will follow," and "Screw the Muslims, Mexicans, Gays and Liberals!"

The shirts, Trump said were made in the "finest tradition of Chinese slave labor."

After the brown t-shirts had been distributed to rally attendees, Trump called for a massive curtain in the center of the arena to be dropped, revealing a massive bonfire.

"We're going to throw our Constitution in this fire," Trump said, "and create a new government based on the Trumpstitution! I know you all say you love the Constitution, but just wait until you try the Trumpstitution. It's gonna be so luxurious, gold leaf embossed, and it will smell like the finest colognes." The crowd roared with approval. "Also, we're going to be burning any textbooks that don't properly identify the planet as flat and six thousand years old! Because education is for libtarded liberals!"

Though he faced upset losses to Ted Cruz in the Kansas and Maine primaries, Trump won in Kentucky and Louisiana over the weekend, however the losses only resulted in Cruz gaining a net of sixteen delegates over the billionaire reality star who is still comfortably rolling toward his party's nomination at this summer's convention.

Reached for comment in his bathroom, where he was sobbing uncontrollably about the field of candidates his party has put forth, RNC Chairman Reince Priebus said, "At least the shirts look nice, I guess?"