This news story is pure satire and you can find more just like it every day on The Political Garbage Chute.

WASHINGTON, D.C. -- A day after Kellyanne Conway drew heavy criticism from the media and was "counseled" by top administration officials for an impromptu commercial advertisement on air during an interview from the White House briefing room for his daughter's clothing line, Sub-President Donald J. Trump said he and his family had "come up with a really great scheme" to keep that sort of incident from happening again. 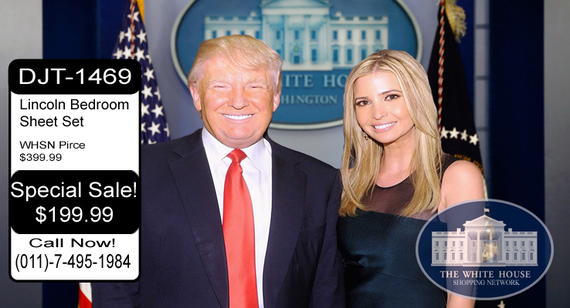 "This is going to be really, really big folks," Trump said, his left hand up in the air, making a sort of "L" with his thumb and forefinger, "like, really, really big. My lawyers are telling me this is totally legal, and why wouldn't they? I pay them to tell me everything I do is okay."

"We keep finding these really neat-o things gang," Trump told the press, "like I found the parchment that Lincoln wrote his first few drafts of the constipation proclamation on. I thought maybe some of you folks out there might like to a chance to own that little bit of American history. What do you say?"

Sub-President Trump went on to preview a few more items that he and his family would be selling on their new channel.

"We have some lovely monogrammed White House bath towels," Trump said, "I couldn't figure out why they had 'SB' as the initials, so my loss is your gain. Or maybe you want your very own set of official presidential pens. You know, I sign those executorial orders or whatever with those things? Probably worth, and this is a conservative estimate, about six or seven billion dollars a pen. We'll have a full set for like, $49,99."

Speaker of the House Paul Ryan told reporters that he ordinarily would not be okay with this idea, but that after a long eight years of Democrats in the White House, he "doesn't care so much" about things he used to.

"I don't know man," Ryan said as he was heading into his D.C.-area gym, "part of me wants to be alarmed at how aggressively and transparently he's using the office of the presidency to enrich himself. Part of me knows that if Obama had even done one of the things that Trump has done I'd be drawing up the impeachment papers myself. But, well, my party's in power now, so all of a sudden, I care a lot less about that stuff. Besides, maybe I want to own a set of White House monogrammed bath towels, too!"

The White House Shopping Network would debut in the third quarter of 2017, should the plans come to fruition. This is a developing story.