The sound bites that dominate today's politics are bad enough, but even worse is when presidential candidates use them to tell false and horrific stories. A perfect example of this is from Republican front-runner Donald Trump.

During a campaign rally on Friday night in South Carolina, Trump told his audience a story about General John Pershing executing Muslim prisoners in the Philippines. Trump said Pershing, in the early 1900's, "caught 50 terrorists that did tremendous damage and killed many people and he took the 50 terrorists and he took 50 men and he dipped 50 bullets in pig's blood."

Trump went out to describe a mass execution shooting of 49 of the prisoners, with the last one being sent to tell the others what happened. It was Trump using this "story" to demonstrate that America needed to get tough on terrorism, using brutal methods, and that he would be the man to do it.

But the story is not true. There was no mass execution led by Pershing. That is a rumor created on the Internet.

A Chicago Daily Tribune article from 1927 has a story where Pershing had prisoners from the Moro Rebellion in the Philippines. The Moros were Muslims who resisted American or any other occupying force.

The Moros had swordsmen, called Juramentados, who were killing Christians in this uprising. It had to be stopped. General Pershing was given this difficult task.

There were no executions as described by Trump.

What Trump should do is tell true stories about the great General Pershing, who commanded American forces during the First World War. While he was a tough and a great military leader, he also was a man who wanted to build peace.

So often that is the case with great military leaders, they are often the first to call for peace building because they understand the horror as well as limitations of war. Pershing was leading young American soldiers, many who did not even have a high school education, into WWI, the worst conflict in history at that point. Their bravery deserved a lasting world peace, which we are still seeking.

Pershing also understood something that more people need to realize, that famine is the inevitable aftermath of war.

After the First World War Pershing teamed up with Herbert Hoover to raise funds to feed hungry children in Europe. Hoover and Pershing co-hosted' "invisible guest" fundraising dinners. They would place an empty setting at the table, representing the starving children. Why can't we hear that Pershing story at campaign rallies instead of a false and violent one? 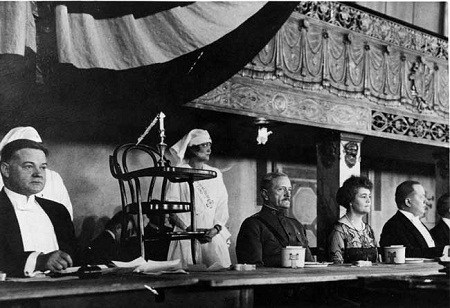 If Pershing were around today he would be advocating food for the hungry child refugees, which are at unprecedented levels today because of the war in Syria. They never talk about hunger during the presidential debates, but it's a top foreign policy issue, which Pershing and other great leaders have understood. Pershing was also deeply concerned about high levels of military spending. He often spoke about achieving global arms reductions and disarmament. Nations could work together to achieve this noble goal.

As a man who understood more about warfare than perhaps anyone in our country's history, Pershing knew well the danger of excessive armament. He might have some questions for Trump or others who talk about pouring on the military spending.

But instead of trying to learn from Pershing, Trump cites a false story in an attempt to sound tough and get a sound bite on TV. The last thing this world needs is more people talking or advocating violence, especially someone running for President.

Whoever wins the next election needs to be peacemaker above all else, in words and actions. But what we saw in South Carolina on Friday night was far from it.