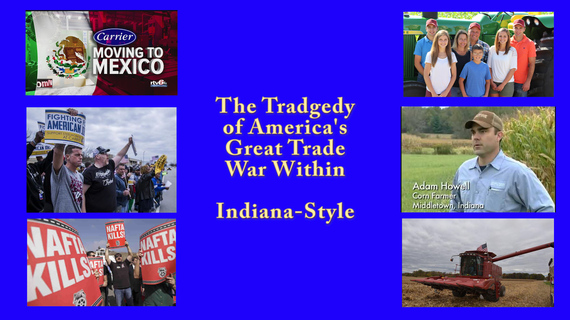 Bad trade deals like NAFTA and China's entry into the World Trade Organization have shuttered over 70,000 American factories, depressed wages, slowed the U.S. economy, and kicked millions of workers to the curb. In sharp contrast, American farmers have been riding a wave of booming exports and laughing all the way to their ag co-op banks. This is the tragedy of America's great trade war politics, and it will be on full display in the May 3rd Indiana Republican presidential primary.

If past is prologue, frontrunner Donald Trump, who has made renegotiating bad trade deals a campaign centerpiece, faces a tough battle in Hoosier Land. The single best predicator of Trump's losses to date in key states like Iowa, Kansas and Minnesota has not been Evangelical concentration, voter conservatism or even average education level as pundits insist. Rather, these losses have simply boiled down to how many tons of soybeans and bushels of grain these states have been exporting to the countries that Trump quite rightly wants to crack down on for unfair trade practices.

To see how this "house divided" scenario may play out in Indiana -- a state critical to Trump's nailing down the nomination before the convention -- consider these two sides of the Indiana trade ledger.

When China joined the World Trade Organization in 2001, it immediately began dumping illegally subsidized exports into American markets. Indiana's steel mill cities from Butler, Columbia City, and East Chicago to Fort Wayne, Gary, and Pittsboro have been particularly pummeled. Companies operating in other segments of Indiana's manufacturing base like United Technologies also began offshoring new production to China's sweatshops and pollution havens. The result across urban Indiana has been rising crime, increased blight, and blue collar despair while a shortfall of tax revenues from slower economic growth has strained Indiana's K-12 and public university systems along with the state's ability to provide basic infrastructure and public safety.

On the rural side of the trade ledger, however, Indiana farmers have grown ever fatter on the China export trade, which has risen by over 400 percent in the last decade alone. This bonanza -- primarily in soybeans to China and corn to Mexico -- has not only lifted farm industry profits in counties from Benton, Boone, and Jasper to Posey, Wabash, and Wayne. It has also spiked the value of the family land upon which many Indiana farmers till their crops.

A similar dynamic has been at play in the aftermath of President Bill Clinton's 1993 NAFTA signing, which triggered a migratory wave of American factories to Mexico that continues to this day. Carrier and United Technologies Electronic Controls are moving over 2,000 Indiana jobs to Mexico this year after receiving millions in state and federal tax incentives. Again, however, on the other side of the trade ledger, NAFTA also blew off the tariff-protected doors to Mexico's corn markets, and Indiana farmers have shipped billions of pesos of maize south of the border.

Of course, the broader NAFTA problem has been a flood of illegal immigration that has simultaneously depressed American wages and increased crime. Ironically, NAFTA was supposed to help stem illegal immigration by moving American factory jobs to Mexican soil. Instead, corn exports from states like Indiana put hordes of Mexican peasants out of farm work -- and on the illegal alien treadmill to El Norte.

This is the chessboard Trump faces in Indiana - and soon in Nebraska. The strategic question is whether Trump can woo a farm vote that has thus far has chosen self-interested short run profits over any greater public good. Here are some possible lines of strategic advance for Trump:

The John Donne "no farm is an island" argument would ask farmers to consider the bigger picture: While bad trade deals may be good for American farm exports in the short run, unfair trade is destroying both American and Indianan life as we know them.

Of course, this may be a difficult argument to make to farmers raking in fistfuls of Chinese yuan and Mexican pesos and living in pastoral settings far removed from the grit and urban grind of Gary and Fort Wayne. Yet if Indiana's farmers are honest with themselves, it is hard for them to deny that unfair trade is wrong for the state as a whole and Trump is the guy who can make it right.

As a "scare tactic," there is also the Paul Revere "the Chinese are coming to buy your farmland" argument. This would be cynical if it were not all too true.

Indeed, China is now gobbling up everything from American homes and hotels and movie theater chains to government bonds, businesses, and, yes farmland and entire agricultural sectors. Here, China's purchase of Smithfield Foods -- the world's largest pork producer -- is a poster child of the problem, but it is the mere tip of a looming iceberg for American farmers and agribusiness. At least through this lens, Trump may be the only candidate who can really save the American farm from a hostile Chinese takeover.

Finally, Trump might effectively play the national security card in a state with a long and proud patriotic history: Trump's messaging truth here is that an increasingly aggressive China is now using the dollars American consumers spend at Wal-Mart to build a massive war machine that is already confronting the U.S. navy in the South and East China Seas. Only a strong leader like Trump can keep the peace -- so let's sell China our corn and soybeans while we can, but ultimately we need to stand firmly together against a common foe.

In the end, if Indiana farmers reject Trump's call to Make America Great Again by cracking down on the trade cheaters just to make a quick soy buck, this will indeed be America's Tragedy of great trade war politics. That's why we should all be watching on May 3rd to see which way the Indiana farm winds blow.

Peter Navarro is a professor at the University of California-Irvine. He is the author of Crouching Tiger: What China's Militarism Means for the World (Prometheus Books) and director of the documentary film Death By China (now free on YouTube).