With the price increases of insurance far outpacing increases in the cost of living, the cost of insurance that consumers are required to buy (auto, home and health) is rapidly increasing as a percentage of the monthly budget. Unfortunately, consumers have no good options for addressing the problem.

Donald Trump has a plan for these frustrated consumers. Trump's proposal is to let insurance companies sell across state lines. Selling across state lines is different from the current law where insurance is regulated by each state and insurance companies must be licensed in each state where they do business. Trump's plan is a form of deregulation, eliminating the need for licensing in individual states. The assumption behind this plan is that erasing the artificial state boundaries will result in more competition, and that an increased level of competition will drive down prices. While creating competition in insurance markets is a good idea, simply erasing the state lines will not create the level of competition necessary to halt the rapid price increases.

Trump's Plan Will Not Result in Affordable Insurance

In most businesses, more competition does result in price reductions. However, the fundamental truth that more competition leads to lower prices does not necessarily apply in the U.S. insurance markets. A report by ValChoice titled Fact Checking Donald Trump on Insurance looks at a ten-year history of home insurance markets. The analysis considers both prices paid as well as the losses covered as a function of the number of insurance providers in the market. The conclusion is that even when there is a five times increase in the number of providers, neither the price paid, nor the losses covered are impacted as would be expected when the level of competition increases. The conclusion is that insurance markets do not feel the effects of competition in the same way as other markets. 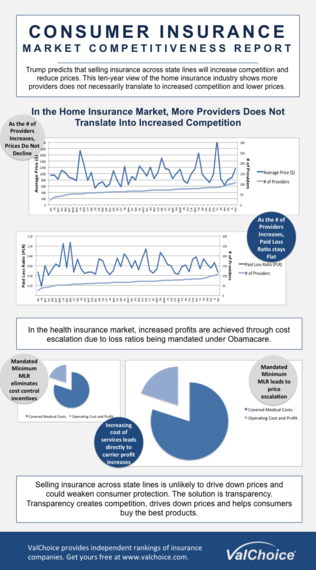 A lack of correlation between competition and pricing is of course a foreign concept to a businessman used to operating in highly competitive markets. However, it's a critical point to consider before implementing changes that effectively deregulate the trillion dollar consumer insurance market.

A Plan That Will Result in Affordable Insurance

It's great that Trump is thinking about how to bring affordable insurance to American families. The rapid escalation of insurance prices must be stopped. Insurance should not be a key factor leading to a decreasing standard of living for American families.

Competition is the right approach to driving down costs. However, the traditional approach of simply having more suppliers to create competition is insufficient. Instead, the answer is transparency. Meaningful information about how insurance companies spend money, including services covered and the actual amount charged and covered for the services needs to be publicly available information. Consumers need to be incentivized to save money on the insured services they use, not forced into narrow networks with few options. Consumers also need to know how insurance companies behave when covering claims. Are claims paid in full, or only partially? How often claims are rejected?

Once consumers can shop for insurance based on the quality of the product they are buying, and are incentivized to manage the cost of their care, a competitive dynamic will emerge. Only after this competitive dynamic emerges will prices stabilize, halting the rapid escalation of insurance costs in the U.S.