The Real Clear Politics average of election polls shows Democratic Presidential candidate Hillary Rodham Clinton leading Republican Donald J. Trump by 6.0 percentage points nationally as of August 25. While popular votes do not equate with electoral victory, Mrs. Clinton's 4.5 point lead in even a four-way race suggests that, should the election be held today, she would be the easy winner.

Per RCP, polls in critical swing states such as Pennsylvania, Michigan, Virginia, New Hampshire, and Colorado - states in which Mrs. Clinton holds at least a 9% advantage and often higher - also point to a comfortable victory for her come November. 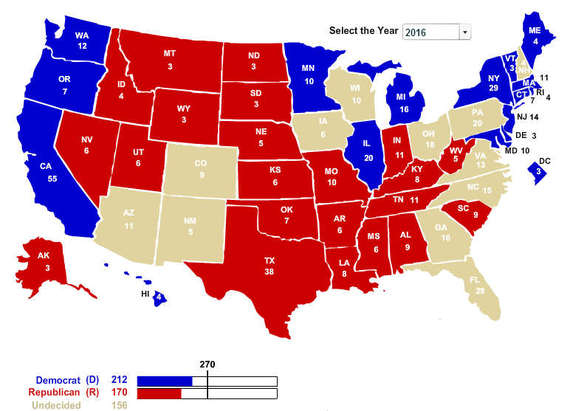 Moreover, Mr. Trump's repeated failure to nimbly capitalize on Mrs. Clinton's sundry scandals (including Server Gate and the pay-to-play shenanigans at the Clinton Foundation) suggest that Mrs. Clinton is right to take a long vacation from the campaign trail (wild conjectures about the true state of her health, notwithstanding). 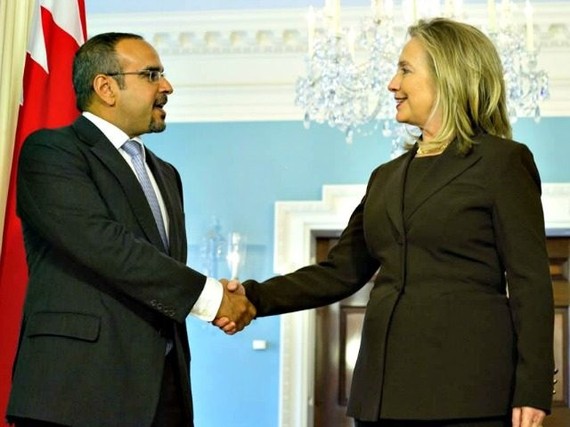 She should be able to coast to victory by playing it safe - running on a de facto mantra of "I'm Not Trump!" - much like Republican Thomas Dewey played it safe back in 1948 against Democratic incumbent Harry Truman (who, like Trump, also suffered from major defections within his party's ranks).

Only one problem: Truman won. He won precisely because his opponent played it safe right to the end. 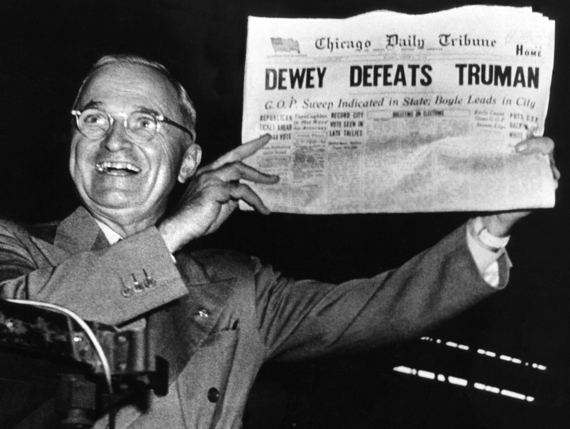 To be fair, Mrs. Clinton does not appear to be playing it safe, as her righteous supporters will exclaim. After all, when she is out campaigning (albeit rarely this month) and giving press conferences (okay, she hasn't done a real one in 266 days), she routinely goes for the ad hominem jugular, which her mainstream media echo chamber pals - many of whom are former paid employees or consultants of Clinton campaigns and/or foundations - repeat ad nauseam. Her most recent ad - which essentially calls Trump, his supporters, and his new campaign CEO white supremacists - really goes out on the race-baiting limb.

On the surface, one would not think such ribald caricatures classify as "playing it safe." However, when it comes to the rogue candidacy of Donald J. Trump, they do. You see, Mrs. Clinton is using the same strategy deployed by Mr. Trump's top opponents in the GOP primary. Texas Senator Ted Cruz, a Harvard-educated lawyer previously excoriated in this space, who's actually presented cases before the Supreme Court, descended to desperately calling Mr. Trump "a narcissist" and "pathological liar."

Marco Rubio, a normally emotionally intelligent Senator from Florida, resorted to insulting Trump's hair, face, hands, and, by extension if you will, his sexual prowess.

After short bumps in the polls, the Cruz and Rubio campaigns imploded, in part, by trying to play on Mr. Trump's vicious, reality TV turf. There is only room for one boorish cad in this election cycle. And Trump owns that lane.

By trying to out-Trump Trump, Mrs. Clinton risks turning off voters who have grown tired of the lowbrow nastiness of this election season. Lower voter turnout, in an electorate where 43% of voters identify as Independent, is bad for any Democrat (whose turnout numbers can vary widely), but especially for Mrs. Clinton, whose negatives are higher than any Democratic candidate in modern U.S. political history.

In basketball, we call this kind of contest "playing ugly." And the uglier this campaign gets, the more it discourages Independents and Democrats from voting. Thus, the more Trump benefits.

After all, his supporters are inured to any sort of ugliness. They stuck with him through his attacks on Vietnam POW John McCain, a physically handicapped New York Times reporter, a Mexican-American judge, and his sundry attacks on Fox News' Megyn Kelly, which I chastised him for in this space. Trump is right. He could shoot someone on 5th Avenue, and his core supporters would not desert him. 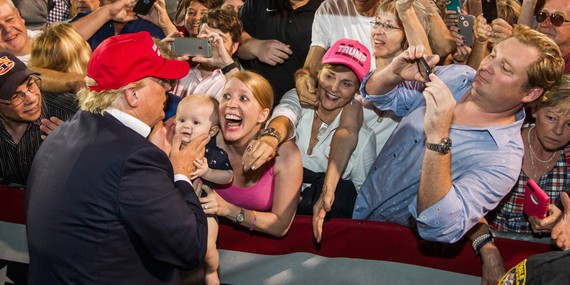 These supporters were of such sufficient numbers in the GOP primary that he could win states with only 40% of the vote. But, in the general election their numbers are not sufficient. Nevertheless, in a low turnout election, with third party candidates Jill Stein (Green Party) and Gary Johnson (Libertarian) quietly and collectively siphoning away at least 15% of the vote, they could prove critical.

However, there are two other things going on that should have the Clinton camp reaching for the Xanax. First, history is on Mr. Trump's side, and not only because it is historically difficult for the party occupying the Oval Office for two straight terms to win a third term. As you learn from a string of Trump surrogates - from Rudy Giuliani to Newt Gingrich - almost every night, and as Gallup data confirm, August polling results mean almost nothing.

In August 1980, Jimmy Carter and Ronald Reagan were tied. Reagan eventually won by 19 percentage points. In August of 1988, Michael Dukakis led George Bush, Sr. by 17 points. Bush the Elder won by 8 points. In August 2000, George W. Bush was 16 points ahead of Al Gore. Dubya actually finished a half-point behind Gore in the popular vote, though he ended up winning the Presidency in the Electoral College.

Secondly, Trump voters are possibly under-counted in telephone polls, as former Clinton advisor Dick Morris notes in his new book Armageddon: How Trump Can Beat Hillary. The argument behind this theory is that media bias against Trump, as persuasively verfied by Michael Goodwin in the New York Post, has contributed to public shaming of Trump voters. Moreover, the violence perpetrated by the left at Trump rallies, the widespread stealing and vandalizing of Trump signs all over the country, and the intimidation of students who dare to wear Trump attire is so great that many of these supporters have gone into hiding. If people think that they will be maliciously shamed or physically beaten for expressing their true feelings about a candidate, do you honestly think that they are going to be free and easy with their sentiments should a pollster ask their opinion by phone?

Morris quotes research showing that Donald Trump's actual vote totals in GOP primaries were often 5% higher than what the last poll in a given primary indicated. This, he claims, showed not only that late-breaking voters went for Trump, but also social desirability bias might be going on as well, especially when Trump's massively funded opponent can - without any mainstream media push-back - run ads everywhere demonizing anyone who dares to support Trump as a KKK-supporting racist. 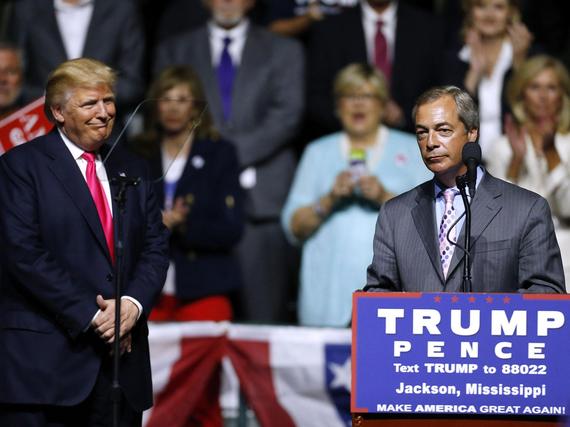 We saw this pattern previously with polls around Brexit. Those in favor of Brexit were routinely under-reported. Contrary to what Democratic pollster Anna Greenberg mistakenly claimed on this platform, the same pattern might be happening with Trump voters, who might - like studies of Brexit polling proved - be harder to reach, harder to classify, and harder to read.

The confirmation of this bias might be found in Trump's statistical dead heat with Clinton in two online polls (USC/LA Times, and Zogby).

If this online polling proves to be the correct barometer of Trump's anti-Establishment support, then, as with the Brexit polling (which had Remain leading by 10 percentage points, per Brexit leader Nigel Farage, only a few months out), the true state of the U.S. Presidential race might be much closer than the RCP polling average currently indicates.