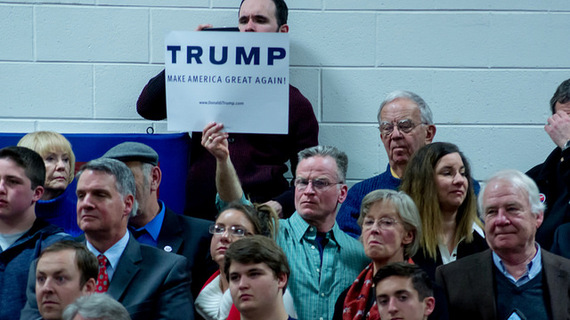 Americans stopped truly regarding ourselves some time ago--that is, looking at both the good and the bad of us. Instead, we took refuge in the 2D selfie--a posed self-indulgence to show the world our preferred vision of who we wish to be. This willful ignorance, this pull to indulge our narcissistic fantasies bled into many aspects of our lives. The vacation became less about the experience of place and more about the pictures we could take of ourselves at the place. We fetishized technology beyond a set of new tools, to a lifestyle that bespoke our individual shininess. Online media lives and dies by the click, so clickbait--the cheap, the vulgar, the garish--became most worthy of attention. TV news has 7 minutes of substance and 15 of talking pumpkin stories. We label puerile good vs. evil comic book banalities profound. We heed bullshit from movie stars and ignore facts from scientists. After all, celebrity is a talent, and science is most interesting when there's a billionaire attached to it.

This is Donald Trump's wheelhouse. An ignorant, racist, narcissist, he is so much of us. We revel daily in media vulgarity. How many clicks on that dick-pic? Sex tapes launch careers. We indulge and celebrate our Freudian ids (visited a typical 'comments' section lately?). Why should we take politics any more seriously than we take news, science, or entertainment? It's all just a another potential mirror, and in that mirror, there is no aspect of ourselves that is not beautiful. Through it, we can justify our racism, enshrine our paranoia, and celebrate our ignorance.

Donald Trump is so right now. He is the outgrowth of our recent obsessions and devolutions. Everything about him is a selfie. He is the most brilliant, the sexiest, the man forever with the most this with the best that. He's an amalgam of every self-help book written in the past 20 years. And many of those who look like him follow devotedly behind, seeing in him their fantasy bests selves--rich, unbound by any norm or convention, free to indulge any verbal tic or idiosyncratic whim, and turning bald-faced lies into mere statements. They envision themselves as inverse twists on the Seinfeld theme--ever-masturbatory Masters of Their Own Domains.

Donald Trump has simply extended the realm of his fantasy. He fashioned his whole life as a vulgar reverie of wealth. Then he pointed a camera at it. He sold it as hotel lifestyle; he sold it as reality show; and now he's selling it as governance. At one time or another, we've all played the game, "If I were king ...." Well, Trump invites white nativists to play that game on the new reality show called Election 2016.