As Donald Trump -- the sometimes businessman, the always carnival barker -- announced his decision to run for President of the United States by railing against Mexican immigrants, many of us working on the front lines of advancing Latino empowerment understood immediately that this was an important moment for our community. We could not and would not sit by idly ignoring or passively dismissing his words. Almost as soon as Trump finished launching his candidacy, Latino organizations from virtually every corner of America reacted. Whether it was on television or social media, in opinion pieces or on radio stations, Latinos didn't let Trump's comments go unnoticed.

In Orlando, Las Vegas, Denver and Prince William County in Virginia, Latinos knew that when Trump slandered Mexican immigrants, he was also discrediting them. It was the chorus of condemnation coming from every corner of the Latino community that caught the eye of corporations and journalists. What they saw was a community coming together and exerting its power as a people who are 55 million strong and counting. A community willing to demand that individuals and corporations of goodwill make common cause with them in the face of callous and false accusations by a so-called national public figure. And, of course, we're very grateful that Univision, NBC, Macy's and Serta, among others, embraced our community's call to stand for what's right. Before this long summer is over, more companies will break with "El Donald" and the erstwhile presidential candidate will ride the wave of publicity for as long as he can before crashing onto the sands of political reality.

You see, Donald Trump's campaign for President of the United States isn't going anywhere. Like so much of his public life, this campaign is more about style than substance. Getting free media attention, delivering some zingers during the Republican debates, calling out his fellow candidates like some middle-school bully -- Trump's ego thrives on these things. But to suggest that this will somehow lead Trump to the Oval Office? Well, as we say here in New York, if you believe that, I have a bridge to sell you in Brooklyn. 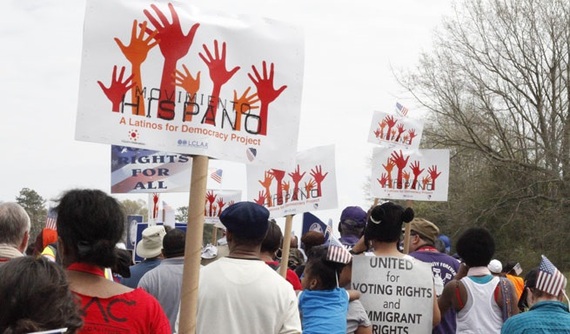 So, if his presidential aspirations aren't likely to go anywhere beyond his imagination, why have we focused so much attention and energy on his clownish act? The truth is that the reaction of leading Latino organizations and community leaders has very little to do with Trump and everything to do with the opportunity for us to go after the vicious anti-immigrant rhetoric that has crept into our national political debates. In particular, it has to do with holding the Republican Party accountable for how it views and acts towards our community.

Over and over again these last couple of weeks, my colleagues and I in the Latino community have come back to this fact: what Trump says about immigrants and Latinos, too many Republicans in this country readily believe. From the ugliness spewing for years from the mouth of Arizona Sheriff Joe Arpaio to the baseless vilification of immigrants by members of Congress such as Iowa's Steve King, many of the GOP's most recognizable faces employ language about immigrants that veers into the sewers of our political dialogue. The ambivalence with which the Republican candidates for President responded to Trump also spoke volumes. Most candidates initially offered shrugs, excuses, or, at best, mealy-mouthed criticisms of their fellow Republican. How they move forward in speaking about Trump and immigration will be a defining moment for the GOP. We certainly hope the party and its presidential candidates make a genuine attempt to speak to our issues and how they would help uplift our families and communities.

This is all good news for our community going into the 2016 election season. Why? Because, in raising awareness of Trump's ugly rhetoric, asking corporate leaders to stand with us and holding political leaders accountable, Latinos have set the stage for more aggressive and substantive national policy debates. The local and national Latino organizations that responded quickly and forcefully to Trump can and should do the same over the course of the next campaign cycle on issues including comprehensive immigration reform, education and health care. That means that candidates looking to burnish their bona fides with anti-immigrant and anti-Latino vitriol should prepare themselves for a battle on the airwaves, social media and beyond. And they should prepare for our community to register to vote in record numbers and turn out at the polls like never before.

The days of walking away quietly from invective are over. For that, we all should say: ¡Gracias, Donald!

José Calderón is President of Hispanic Federation and Co-Chair of the Immigration Committee of the National Hispanic Leadership Agenda (NHLA), a coalition of the leading Latino organizations in the nation.