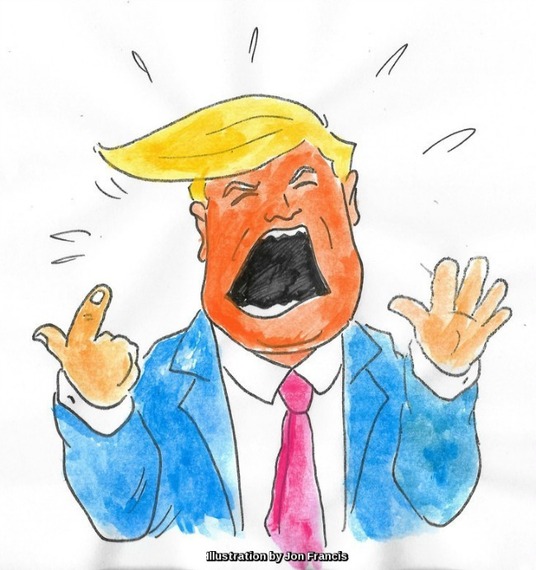 GOP Presidential candidate Donald J. Trump certainly is a funny man, creating such classic insults as "Hillary 'Rotten' Clinton," and "Pocahontas" for Elizabeth Warren. He has countless comical putdowns for every opponent. And his impersonation of a handicapped reporter was certainly hilarious to his supporters. Don't forget the first round of GOP debates when Megyn Kelly she said "You've called women you don't like 'fat pigs, dogs, slobs, and disgusting animals,'" and the quick-witted Trump replied "Only Rosie O'Donnell." And then there was that incredible Trump line about his daughter Ivanka's nice figure, "I have said if Ivanka weren't my daughter, perhaps I'd be dating her." Ha! Ha! Huh?

My pal comic Jeff Ross better watch out-- there's a new "Roastmaster General" on the horizon. (Of course, there is a big difference-- Jeff is actually one of the funniest people on the planet.)

Trump obviously has an elevated sense of humor. He's quite a crackup-- or perhaps crackpot? At any rate, I am sure anyone with Donald's wit cannot only dish it out, but can also take it. Right? Right? Just ask Seth Meyers who put this to the test:

Here are some one-liners and other gags I wrote especially for the good-humored Mr. Trump.

● Bill Clinton wears an "I'm With Her" t-shirt. I wonder if Melania Trump wears one reading "I'm With Stupid."

● Trump says "I want to debate [Hillary] very badly." If he shows up, I am sure that's exactly what he will do.

● Do you think Trump's medical deferment from the military was for having small hands-- and mind?

● Trump said McCain was a war hero only because he got caught. Trump is a brilliant military strategist who cleverly avoided getting caught-- by not serving.

● A veteran recently gave Trump his Purple Heart, something Trump said he always wanted and never thought he would get-- a heart.

● Trump's medical deferment from the military was supposedly for bone spurs on a heel. Of course, anywhere he had bone spurs, they would be on a heel.

● Trump's favorite movie is The Wizard of Oz. He identifies with characters who have no heart, no brain, or no courage.

● Trump reportedly has little fingers-- we all would be better off if Twitter had a length requirement.

● Trump's ancestor's family name was "Drumpf." Sounds like one of the Seven Dwarfs-- and all of them had small hands too.

● Trump feels he has license to ridicule the handicapped. After all, he has his own physical challenges-- he has his foot in his mouth and his head up his ass.

● Trump won't release his tax returns, but his wife's nude photos confirm that she certainly has nothing to hide.

● Trump says Melania's nude photos were taken before he married her-- she posed with less-on, until she married a more-on.

● I read that the dress Melania Trump wore at the RNC was actually a beautiful contemporary wedding dress. She better hang on to it--she turns 47 next year and Donald may want turn her in for a newer model.

● Trump has boldly stated "I will be the greatest jobs president that God ever created." He inadvertently omitted the word "snow" before the word "jobs." (As an aside, I think it is very unfair to blame God for creating Trump.)

● People used to move to Canada to avoid the draft. If Trump is elected, they will have to go to avoid the blowhard.

● Trump was glad to have a crying baby removed from one of his recent rallies-- like any good businessman, he was pleased to eliminate the competition.

● Trump's Penthouse drips in gold-leafed rococo furnishings. Apparently he not only admires Saddam Hussein, but also his decorator.

● Trump must think we are stupid. He wants us to believe that global warming is fake, but that his hair is real.

● Has anyone noticed how Trump's necktie keeps getting longer and longer? With Pinocchio it was his nose.

● Trump says they may name the wall he'll build on the Mexican border the Trump Wall. I wonder who they will name the tunnel after.

● Trump vows to keep America safe-- and if insulted, he will not hesitate to send America's young men and women into war to defend his honor.

● Camp Trump has backed off their claim that Melania has a college degree in design and architecture at University in Slovenia. But she's certainly no dummy. Even she was smarter than to enroll in Trump University.

● Do you think Trump University specializes in BS Degrees? I wonder if their school motto is "Trump U!"

● Trump gave the VP slot to Mike Pence. I hope the disappointment and stress doesn't cause Chris Christie to overeat.

● Trump says America's infrastructure is crumbling, and he wants to rebuild our roads and bridges-- so his pal Chris Christie can close them down.

● Trump has said "If I become president, we're all going to be saying 'Merry Christmas' again." It seems odd to force Jews, Muslims, Buddhists, Hindus, Jehovah Witnesses, and atheists say this to each other. But it may not matter -- with Trump's short finger on the nuclear button, we all could have already seen our last Christmas.

● Some people call Trump "two-faced," but that can't be true. If it were, why would be wearing that one?

● Trump has implied that he is well-endowed. Perhaps he deludes himself into thinking people are saying he has a big dick when they call him a big dick.

● Trump may not have the best chance of winning, but he certainly does of whining.

● Trump is a great advocate for people of color-- white and orange.

● Trump is under IRS audits. Do you think if he owes any taxes or penalties, he can force Mexico to pay them?

● Trump has been called ignorant, tasteless, tactless, thin-skinned, fat-headed, immature, narcissistic, racist, misogynistic, xenophobic, vindictive, cowardly, petty, pampered, disingenuous, deceitful, disgusting and dangerous, as well as a bully, a braggart, a bigot, and a bore. That's so unfair-- he's not a bore.

Trump may have the last laugh. If he's elected, there may be some IRS audits in my future.