President Trump's first treaty might be closer than you think, if he chooses peace. It's the Comprehensive Nuclear Test Ban Treaty (CTBT), which bans all nuclear test explosions.

Trump just needs to encourage the Senate to ratify the treaty. With the support of Trump and the Republican led Senate, the treaty could be approved.

Dwight Eisenhower and John F. Kennedy were the first presidents to seek a nuclear test ban treaty. Why? Because they understood its vital role in leading to disarmament.

JFK said, "The conclusion of such a treaty, so near and yet so far, would check the spiraling arms race in one of its most dangerous areas. It would place the nuclear powers in a position to deal more effectively with one of the greatest hazards which man faces in 1963, the further spread of nuclear arms."

That hazard, nuclear proliferation, is still tragically with us today. There are almost 15,000 nuclear weapons worldwide despite previous treaties. 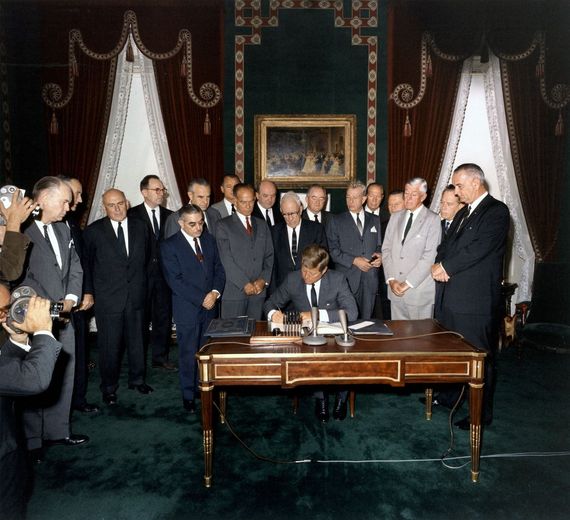 Ike and JFK's efforts got a limited test ban, but still needed was the comprehensive ban which the Senate could now approve.

President Ronald Reagan was another advocate for outlawing nuclear testing. It was Reagan who said, "I am committed to the ultimate attainment of a total ban on nuclear testing."

Reagan sought the ratification of treaties that placed further limitations on testing, slowly building the way toward a complete ban. Barack Obama also supported the CTBT, but was unable to work with Republicans on getting the treaty ratified.

Trump has the chance to complete the mission of these former presidents and get this treaty. He should seize this moment.

If the United States were to ratify the test ban treaty it would encourage China to join as well. Nuclear rivals India and Pakistan, also treaty holdouts, would be far more likely to sign on too. Russia has already ratified the treaty.

There are eight nations that need to ratify for the CTBT to take effect: The United States, China, Israel, Iran, Egypt, India, Pakistan and North Korea. We need to show leadership at this pivotal stage or face the consequences of more nuclear test explosions.

The Comprehensive Nuclear Test Ban Treaty is in every nation's interest. The alternative of testing nukes, or threatening to test, does nothing but encourage expensive arms races and heighten international tensions. How tragic it would be if the U.S., Russia, China were to waste valuable resources in arming nukes when they could have taken the road to disarmament.

The CTBT can build the confidence of nations toward reducing nukes. That is a sound policy: the step by step reduction of nukes globally. That is what Ronald Reagan and others envisioned on the journey toward eliminating nuclear weapons.

George Schultz, who was the Secretary of State for Reagan, says, "the CTBT would make us and the world safer, but it would also be part of rebuilding the momentum toward realizing how dangerous nuclear weapons are and getting rid of them."

One thing that did not exist during Reagan's time was the extensive international monitoring system to detect nuclear explosions. This is critical toward verifying the treaty and making sure no country does secret test explosions.

The development of this technology has taken place over many decades and new monitoring stations are being unveiled constantly. There are hundreds in operation across the globe in numerous countries including Russia.

This past December, in China, a treaty monitoring station to detect nuclear test explosions was certified. This was the first time in China and more are on the way. 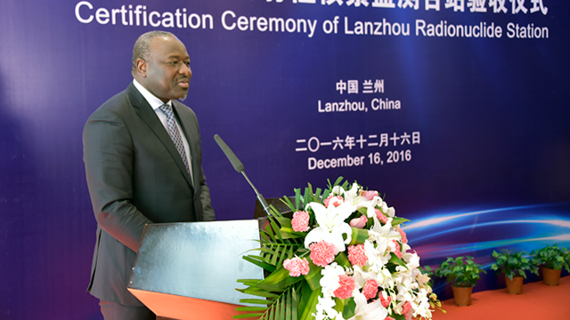 Dr. Lassina Zerbo, the director of the CTBT organization, says, "This is a milestone for the development of the International Monitoring System (IMS) and for the growing cooperation between China and the CTBTO. Because of China's size and importance, a small step from China is a big step for the international community."

If this progress can take place in China, think of what that could mean for their neighbor and ally North Korea. China is the most influential nation for ending the North Korean nuclear threat.

North Korea tested nukes twice in 2016 and the development of their arsenal is one of the most dangerous situations the world faces. Diplomacy is the best way to defuse the crisis.

Think how much stronger that diplomacy would be if China ratifies the Comprehensive Nuclear Test Ban Treaty as an example for their neighbor. North Korea could then end testing, which would be an opening for disarming its entire arsenal.

The United States simply cannot afford to return to nuclear testing. It would be politically disastrous. And there is no need to because technology, the Stockpile Stewardship program, can maintain the U.S. arsenal without test explosions.

Trump must not squander the opportunity to end nuclear testing and create the atmosphere for global nuclear disarmament to take place. As president he has this chance to build peace.

The Comprehensive Nuclear Test Ban Treaty is a relatively easy first step for Trump. Let's hope and pray he takes it.