Throughout the primary season, leading Republican presidential candidates vied over who could bash immigrants the hardest. And they were promising more than border walls. Donald Trump is the most extreme immigrant-blamer; according to his website, "Providing healthcare to illegal immigrants costs us some $11 billion annually. If we were to simply enforce the current immigration laws and restrict the unbridled granting of visas to this country, we could relieve healthcare cost pressures on state and local governments."

As with many of Trump's claims, this one is wrong. But unlike some of his other falsehoods, the media has left this one unchallenged. Trump's $11 billion figure comes from an obviously biased study that's based on outlandish assumptions.

For instance, it counts as "immigrants" millions of U.S. citizens -- children who were born in the U.S. of immigrant parents. It also assumes that immigrant families have high health care costs, ignoring a raft of data showing that immigrants use little care. For instance, nearly half (48 percent) of noncitizen immigrant children never see the doctor in the course of a year.

Trump's numbers don't just exaggerate taxpayers' costs for immigrants' care, they ignore the billions that immigrants pay in taxes. Compared to other Americans, immigrants are younger, healthier and more likely to be male and part of the workforce. That means that an outsized share of immigrants pay the payroll taxes that support Medicare and Social Security, while few are eligible to draw benefits from these programs.

Without immigrants -- and especially unauthorized immigrants -- Medicare's Trust Fund would be broke. Each year, immigrants pay about $11 billion more in Medicare taxes than Medicare pays for their care. And undocumented immigrants contribute the lion's share of this subsidy.

And, just like everyone else, unauthorized immigrants pay sales taxes every time they shop and property taxes (indirectly) when they pay their rent, contributing $11 billion annually in state and local taxes.

While unauthorized immigrants contribute billions in taxes, they use shockingly little health care. Most of the federal health programs they help pay for (like Medicare, Medicaid and the ACA's plans) exclude them. And those who pay for private coverage use very little care, so their premiums effectively subsidize other enrollees with private insurance.

As physicians, we believe that medical care must be available to everyone residing in the U.S. However, if Trump and other politicians are concerned about "relieving healthcare cost pressures on state and local governments" they should champion fair immigration policies that assure a steady flow of immigrants who come here wanting to work and willing to pay taxes, and don't need much medical care. 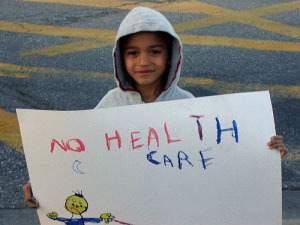 Dr. Leah Zallman is a research scientist at the Institute for Community Health, a primary care doctor at Cambridge Health Alliance, and an instructor of medicine at the Harvard Medical School. She is a health services researcher who focuses on health disparities, with specific areas of focus including immigrant health and access to care for vulnerable populations. Dr. Steffie Woolhandler is an internist in the South Bronx, professor at the City University of New York School of Public Health at Hunter College, and lecturer in medicine at Harvard Medical School. The opinions expressed here do not necessarily reflect the views of the authors' institutions.