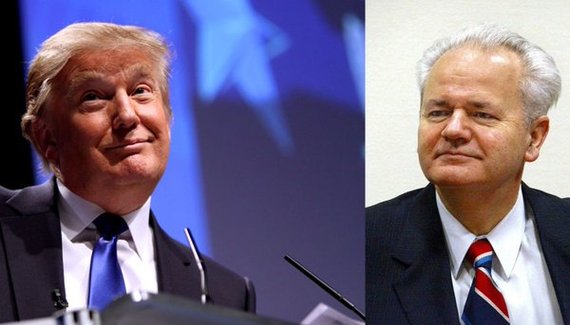 They are not merely the standard bearers of an appeal to divisiveness, hate, but both Trump and before Milosevic have been enablers of extremist nationalists, fascists. Most Bosnian-Americans and their children born in the U.S. would not be now Americans except for the genocidal war sparked 25 years earlier by then-Serbian leader Slobodan Milosevic and executed by his supporters, many of them previously only perceived as fringe groups. We understand the damage inflicted upon society when tolerance became a target in what was a country that had previously largely benefited from diversity, much like America. The United States ultimately allied itself in subduing these extremists in the former Yugoslavia and first in Bosnia and Herzegovina. The fascism though has not been sent back under the rock, where it had lived since the defeat of Nazism in WW II. It again has been enabled and taken hold from ISIS to Putin-backed assaults upon Ukraine, but it has also spread to what we knew as the stalwarts of democracy in Western Europe and more notably the U.S. What a Trump Presidency puts at risk now is what most Americans value as our democratic, diverse and free society. Further it would reverse the welcome that then Bosnian refugees received. Immigrants, and not just those labelled unfavorably as Muslims, would be viewed as cultural invaders, abusive free loaders or criminal/political threats. The contributions made by Bosnian-Americans would be trivialized or ignored, from serving with distinction in the U.S. military and law enforcement, to arts and culture to creating jobs as entrepreneurs to doing the hard jobs with quality and pride. When I came to the U.S. as a very young boy in 1967, when very few even knew of a Bosnia and Herzegovina (BiH), I embraced my American identity one nourishing bite at a time. Now Bosnian-Americans are an integral, integrated and vibrant part of the American mosaic, energizing and adding to our society as a whole as citizens, as voters and as patriots. (Read: "From Bosnia to U.S., from Refugees to Great Americans")

"Dog Whistles" that go Beyond what is Audible but Empower Calls to Violence, Ethnic Cleansing:

During the bleak years of the wars in the former Yugoslavia I had numerous encounters with Slobodan Milosevic. Compared to Radovan Karadzic or General Ratko Mladic, at least when he spoke off-stage and beyond his election appeals to Serbians, he was viewed by European and US mediators as more reasonable. They heard Milosevic's words in English as genuine to reject the extremists who would commit ethnic cleansing. They, however, could not hear the "dog whistle" spoken in Serbian that enabled the most intolerant and brutal within his core constituency. 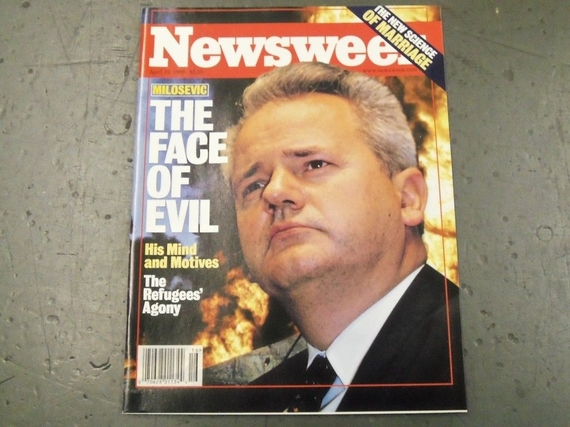 Donald Trump, with whom I have had less direct contact when I worked as investment banker in New York, seeks to be as clever in providing one audible message to the broader public but also a "dog whistle" which arouses and enables his most divisive, hateful supporters. As a businessman, Trump is at best embellished as a promoter and at worst someone who built his wealth by cheating others. Some correctly question whether the Trump brand is as false as the VW emission standards. Contradictions are part of our human existence. America's Founding Fathers recognized the dangers of such in the carefully crafted U.S. Constitution that is intended to balance powers between institutions and also dampen personal egos, particularly when contradictions take the turn to hypocrisy.

Blinded by Narcissism and the New Inquisition:

What is most dangerous about Trump though is his ever more exercised narcissism. He has no commitment or belief in studying the issues or even accepting the advice of those knowledgeable. Ideology is only useful when it appears to agree with his instincts of the moment. Trump has come to believe that he is the smartest man in the room, on every issue, and because his reliance upon intimidate, brutalize or simply lie are superior tactics over any longer-term vision of US strategic priorities. Pope Francis also sees the threat of modern-day "false prophets" who see theology as not humanizing but targeting of those who are different. Trump, feeding of a base that seeks the messiah to revert to an America that favored those citizens of certain race, religion, gender, sexual orientation and/or lineage, acts as if he can walk on water, arouse the believers to violence and spark a modern crusade or at least inquisition.

Milosevic was more self-aware or perhaps clever. Rather than naked narcissism he employed charisma and what I wrote about as "Seduction Diplomacy." Many, perhaps even most within Serbia and Montenegro were not supportive of Milosevic, but they were marginalized or maybe overwhelmed by a core base that was not fooled by Milosevic's appeal but drawn to it feeling that it was OK to voice, vote and act-out bigotry and hate.

What many in the U.S. media have done inadvertently is provide an excuse to be a Trump supporter by speaking of struggle or anger created by loss of jobs, income and opportunity. However polls as Gallup, have evidenced that while some truly feel their economic well being shrinking, the core of Trump supporters is economically well-off and tends to live in communities that in-effect are segregated from people who are not like them in skin color or religion... in other words, limited or no diversity. Trump proudly speaks of the support of his "poorly educated supporters." This though is only partly about education and also much about core Trump supporters not being exposed to the diversity of perspectives and peoples present in a more cosmopolitan environment or university campus. It is the mentality of a homogeneous village that finds fault even with the new traffic light installed on its main street to deal with the increasing number and diversity of vehicles driving through and by them.

How Many Trump Supporters want an Authoritarian America?

Pope Francis has implicitly defined the Milosevic and Trump phenomena:

"No tyranny finds support without tapping into our fears," Francis said. "This is key. Hence, all tyranny is terrorist. And when this terror -- which was sown in the peripheries, with the massacres, looting, oppression and injustice -- explodes in centers with different forms of violence, even hateful and cowardly attacks, citizens who still retain some rights are tempted to the false security of physical or social walls."

While many of Trump's voters may not be the "deplorables" as labelled by Hillary Clinton, I fear how many of his supporters are driven to march behind him not despite but because of his intolerant even hateful message on ethnicity, race, religion and/or women. 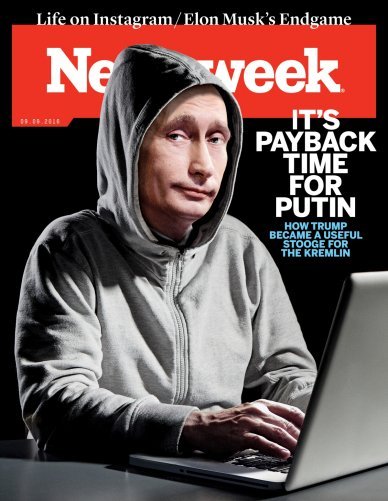 When speaking of Trump it is difficult to view it as either Republican or Democratic. In Trump's narcissistic mind it is only about Trump. Bosnia and most importantly Bosnian Americans have had proven friends among Republicans including Senator Bob Dole, Senator John McCain and Congressman Chris Smith. Similarly, Democrats have been strategic allies and/or friends. Hillary Clinton will carry with her to some degree the good and part of the legacy of the Bill Clinton Administration. The Dayton Agreement ended war, and we felt that we had only a choice then of "good war or bad peace." America now recognizes that concessions made at the expense of BiH over the last two decades plus, the appeasement of an ever more nationalistic Kremlin, or rationalizing war and peace in terms ethnic/religious divisions, have come back as a resurgent cancer, whether Putin, Ukraine, ISIS or notion of disenfranchised populations in Europe. (See: "Construction According to Putin's Model, from Bosnia to Europe?")

Trump's America would Lose Respect, Strength and thus be more Likely to be Exploited by Adversary and Seen as Lesser Leader by Allies:

US Election 2016 though is much more about the future of the United States. We owe it to vote first with American priorities in mind. Hillary Clinton would be a good, perhaps she can even rise to be a great as well as first woman US President. Hillary is thoughtful, strategic and aware of the mistakes made. Trump cannot admit a mistake. He sees no distinction between any "Muslim" label imposed. Refugees/immigrants are risks and not new assets for America. He promotes fellowship with Putin as well as his version of fascist nationalism, and thus also lowers the unique and inclusive American patriotism.

Our Bosnian-American experience has made us an electoral, democratic force including in such "battleground states" as Arizona, Florida, Georgia, Iowa, Michigan, Missouri, North Carolina, Ohio and Pennsylvania. We recognize that our bonds with BiH strengthen America economically and politically. BiH can be an ever more critical ally to the US in a world destabilized by a Putin or ISIS or the appeal of fascism. Hillary Clinton has been hounded by various accusations, some more legitimate but most again seeded in bigotry. The Clinton Foundation has worked more admirably alongside partners/donors (including Bill/Melinda Gates, Muhammed Yunus, and governments as United Kingdom, Norway and Qatar) all who have made education, disease eradication and international dialogue as core goals. Most Bosnian-Americans will be focused, as their neighbors, on better jobs, education, health care and a safer America from threats outside or within, bigots of any color to the weapons of word or deed. 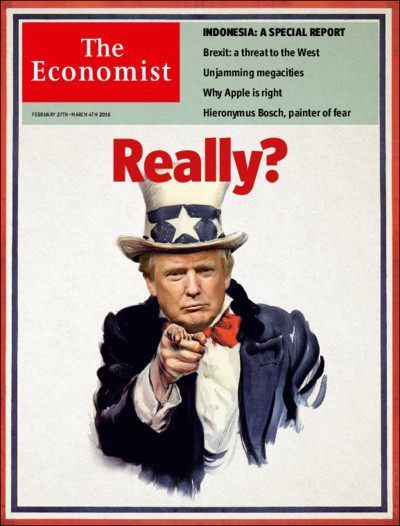 Trump is more dangerous, even if not as clever. Most around the world see Trump as a uniquely American clown who makes a joke of the principles this great country stands for -- they would laugh if not being so frightened by the prospect of this man with his trigger-finger on the nuclear weapons arsenal of the most powerful country in the world. They rightfully ask is this "Really" what America is!" More sadly though, many see our potential demise as a self-inflicted wound with potentially fatal consequences. The U.S. has set the standard technologically, in media and what defines an inclusive, free and democratic society. No other free society is obliged to copy U.S. democratic institutions. However, many from western Europe to Asia already see Trump as cover for unleashing intolerant and hateful forces within their own countries, sometimes under the guise of democracy, from Germany and the Netherlands to India and Pakistan, and this overwhelmingly undermines America's interests.

Trump speaks of strength. However, respect is nurtured and not earned by fear of you as a clown or worse, psychologically unbalanced. Narcissism does not equate to confidence. Respect and strength is developed from thoughtfully evaluated and diligently implemented policy. Trump makes America weaker, more likely to be tested by adversaries, more divided within and less capable of projecting itself from assault at its borders, interests or model as a positive factor globally and for the interests of its own citizens.