Donald Trump is many things -- a demagogue and a pompous blowhard, a braggart and a race baiter -- but in the end, he's nobody's fool, except perhaps his own. Thus, his recent lauding of Sarah Palin and his hiring of her former Chief of Staff reveal that Trump's campaign for the presidency is, ultimately, more of a circus act than it is a serious endeavor for the White House. If Trump were really serious, he'd be keeping the quitter governor at bay. 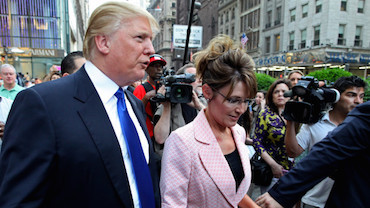 Trump and Palin have many things in common--and Palin has long been enamored of the Trump family's gawdy wealth and garish celebrity--but what they share in terms of American national politics are elevated "unfavorable" ratings (even within the Republican Party) and, as a result, a hard, impenetrable ceiling to their national political ambitions. Trump is polling extremely poorly among women--both Democrats and Republicans alike--with unfavorable ratings above the 60 percentile a year before the election. Any bookie will tell you that you simply cannot get around numbers like that. Palin knew it, and he knows it, too.

Like the late Huey Long and Joe McCarthy, both Trump and Palin have tapped into the deep anger and fear of a small but volatile slice of the American body politic. It's a real and complicated demographic, largely misunderstood by the American media, who are far too isolated to either grasp or understand this troubling swath of the American electorate. Both Trump and Palin have uttered racialized attacks on Obama and have tapped into deep-seated strains of intolerance in their comments on immigration and other significant issues facing this country. Palin treaded into even uglier cesspools of racism this week when she compared the Confederate flag to the Planned Parenthood logo. This woman knows no shame.

And, of course, these types of hyperbolic and demagogic remarks are at the core of both Palin's and Trump's political currency. They generate media hype and internet traffic that allows them to continue peddling in their sordid trade. And it is nothing if not sordid. How they sustain their presence in the national debate is a sad commentary on the dynamics of both the mainstream America media and the presidential selection process.

Moreover, both Trump and Palin are viewed as anathema by the establishment wing of the Republican Party. Their harshest critics are not liberals or Democrats, who largely ignore their marginal rattle, but Republicans concerned about the damage that both are doing to their party and to their national political prospects in 2016.

Trump's remarks on Palin's "Mama Grizzly Radio" last week simply reflect his willingness to pander to her narrow and feculent political base. Given the limited breadth of his own support, he really had nothing to lose. "I still have people saying, 'Get Sarah's support! Get Sarah's support!'," he declared. "No matter where I go, Everybody loves her." He obviously hasn't been to Alaska lately--where she's despised by a considerable segment of the Last Frontier's electorate. Palin stayed out of the 2012 race and watched her status sink into oblivion because there wasn't a single state--including her own--that she would carry in the Republican primary.

Indeed, Palin was detested so badly by Republicans that she wasn't even invited to the 2012 GOP convention in Tampa--a mere four years after she appeared on the GOP ticket. Think about it; that's a serious self-implosion. You can bet that El Donaldo will be persona non grata within the GOP in 2016 as well. His enormous wealth (and even that's been exaggerated) will enable him to maintain a national platform long after Palin's has rotted and collapsed, but, in the end, his fate will be the same--a pariah on the outside looking in.

Trump's selection of Michael Glassner, former CEO of Palin's ill-fated political action committee SarahPAC, represents another desperate move by Trump. Glassner was once a semi-serious figure in Republican circles, but he was moved to the side by the McCain campaign team in the early days of the 2008 campaign when he allowed Palin to go rogue on clothing expenditures, and he's done nothing of significance since in national politics. That Glassner headed up Palin's ship while it was sinking off the Gulf of Alaska says oodles about his capabilities.

Ever since her first announcement as John McCain's running mate in August of 2008, and the very brief honeymoon period she was graced with after, Palin's national favorability ratings have continued to plummet. Trump must know that he's facing the same ignoble outcome--the presidency will never be his.

As with Palin, who hinted at a third-party run four years ago, Trump is flashing a similar wild card. It's a threat directed specifically at the Republican Party. He has the resources and, perhaps more significantly, the ego to do it. He will never win the Republican nomination for the presidency--bet any amount of money on that--but he might well cost them the White House in 2016 with a third-party run (and with La Palin riding shotgun). It will be a media circus like no other--yet another of their reality TV shows fueled by this country's sick celebrity fetishism.

Trump's vicious attacks on John McCain--and Palin's implicit criticism of McCain as well--have illustrated that there is no low to which our modern-day Bonnie and Clyde will not stoop. A third-party run is not out of the question. They are both narcissists at heart--and the ongoing media attention they would receive is what really propels their egomaniacal political agenda.