Daily fake news can be found at The Political Garbage Chute. 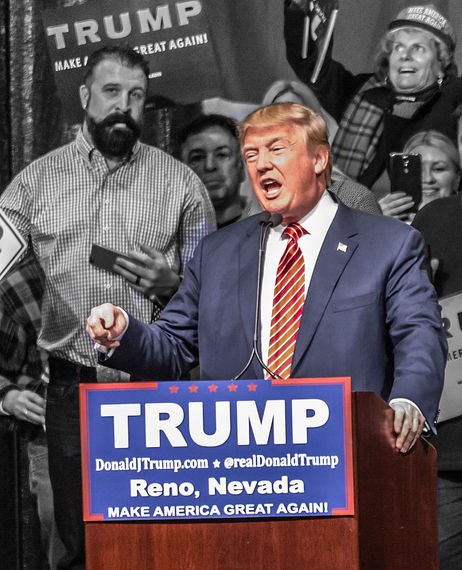 "Tell me this, you're all smart people, tell me this," Trump beseeched his crowd, "why are President Obama and Hillary Clinton so afraid to use the words radical Islamic terrorism? Clearly they don't understand that we have to say these words, together, all in a row, or not only will we not ever defeat ISIS or Al Qaeda, we'll never defeat terrorism."

Trump told the rally attendees that he and his team of national defense experts, mostly comprised of people who have been retired and out of service for a couple decades, plus some folks the George W. Bush administration thought were too dumb for their purposes, have stumbled upon the easiest, most effective way to combat terrorism. Mr. Trump further stated it is not "finding the root causes and fixing them as best as we can," but rather, "screaming 'Ooga Booga!' at all Muslims everywhere."

"Some will tell you I'm generalizing about Muslims the way a certain mustachioed, crinkle-dicked fascist did back in Germany in the 1930's," Trump said, "about Jewish people. I don't know about all that, but I do know that if we don't shout 'Ooga Booga' at the top of our lungs, the terrorists win. And since we all know terrorists are only Muslims, and not say, people who shoot up Planned Parenthood clinics or bomb federal buildings in Oklahoma, it only makes sense to castigate all Muslims for the actions of a small minority of them."

During the rally, Trump also took the time to once again hammer away at Hillary Clinton for her disparaging comments about roughly half of his supporters.

"How dare Hillary say you're deplorable," Trump shouted, as he pointed to an elderly man in the crowd who was open-hand smacking a millennial woman in the face for carrying a protest sign," and how dare they call you deplorable just because you spam people on Twitter with Nazi memes if they have vaguely Jew-y names? How dare she generalize about all of you? I say we focus on rounding up the Mexican rapists -- which is all of them -- and the Muslim terrorists, which is all of them."

When a reporter asked if he thought on average, per capita, there were more of his supporters that were racists or antisemites than there were Muslim immigrants from Syria who are part of terror cells, Trump bellowed a laugh.

"I don't even know what half of those words mean," Trump said, "but I do know, for a fact, an undeniable, great fact, that the only path to victory over radical Islamic terrorism is to shout 'OOGA FUCKING BOOGA!' That's it. The rest of this debate is for the nerds and eggheads to figure out. Ivanka and I have a date later I need to get ready for."