Americans are more likely than not to consider the sexual assault allegations against Donald Trump credible, according to a new HuffPost/YouGov poll. But opinions are deeply divided along party lines, with many Republicans saying that, even if true, the allegations aren’t enough to disqualify him from the presidency.

Americans say by a 17-point margin ― 43 percent to 26 percent ― that they consider the allegations of sexual assault and harassment levied against Trump to be generally credible, while another 31 percent haven’t heard enough or aren’t sure.

For some people, the allegations have personal implications as well as political ones. Twenty-eight percent of Americans say that they personally identify at least somewhat with the women who’ve made accusations against Trump. Among Americans who say that they’ve personally experienced a sexual assault, that number rises to 45 percent, with 31 percent saying that they feel “a lot” of kinship with the women in question.

The survey also found that most Americans ― 53 percent ― say that conversations about groping and kissing women without consent, which Trump was filmed bragging about, are not normal for men. Trump referred to his boasts after the tape emerged this month as “locker room banter.” 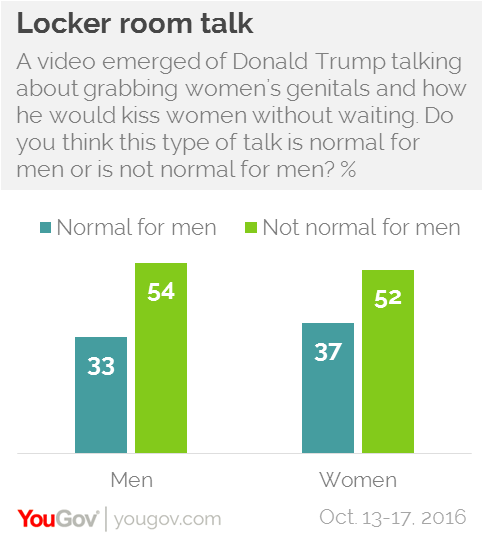 Just 26 percent think Trump respects women, while 59 percent say he does not. Yet, the latest news seems to have done little to shake the confidence of the minority who still believe that he does. Among registered voters, 31 percent say they believe Trump respects women, virtually unchanged by either the revelation of the 2005 tape or the accusations of sexual assault this month.

A main reason for that is partisanship. While some Republicans have deserted Trump in the wake of the most recent scandals, many are siding with him. Republicans are 34 points likelier than Democrats, 51 percent to 17 percent, to say that Trump’s comments were normal for men. They are 49 points likelier, 55 percent to 6 percent, to say that Trump respects women.

Those partisan divides ― which are far larger than the divides on other demographics, such as gender ― extend to the latest allegations. Seventy percent of Democrats, but just 12 percent of Republicans think the sexual assault allegations against Trump are credible. 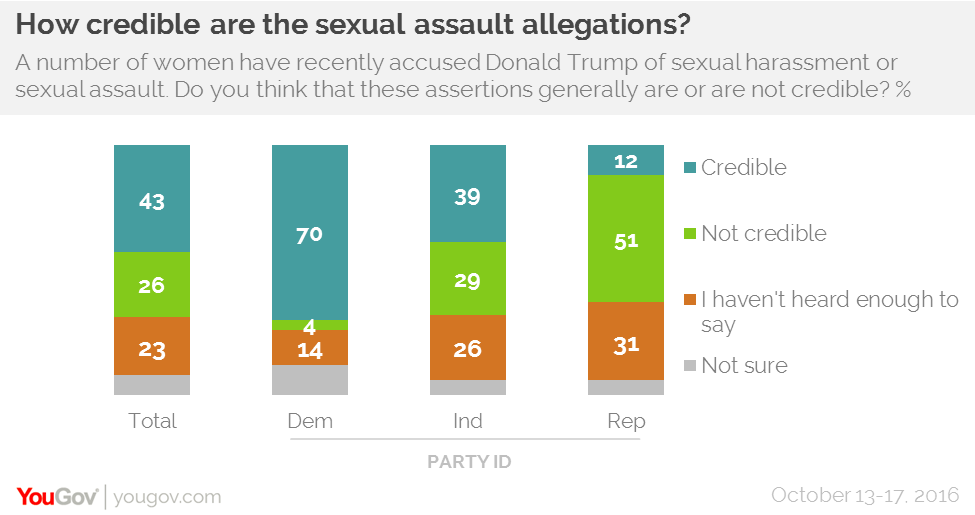 Seventy percent of Democrats think that, if true, the allegations are disqualifying, with 21 percent saying they’re relevant but not disqualifying. Just 3 percent believe that they’re not relevant.

Although 19 percent of Republicans think the claims would be disqualifying, a 39 percent plurality say that, even if it were proven that Trump sexually assaulted women, it would not be relevant to the election. 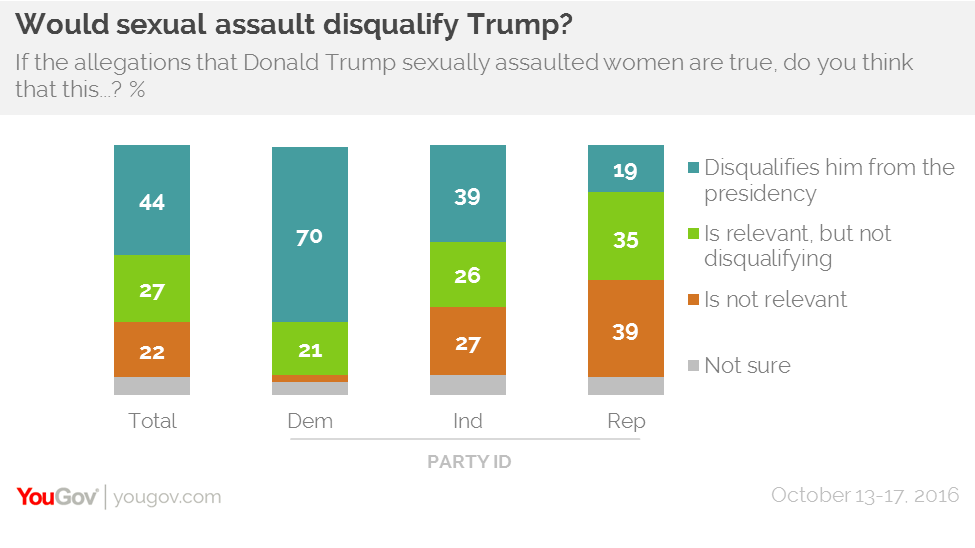 Even responses among political independents are highly dependent on which party they feel more of a connection with. Most independents lean toward one party or another, with those who favor Democrats, for instance, 78 points likelier than those who tilt toward Republicans to consider the allegations against Trump credible.

Partisan divides go deeper than just the response to Trump. Feelings about the broader topic of sexual assault are also significantly polarized. As the political scientist Michael Tesler noted this week, Republicans ― especially those who supported Trump in the primaries ― were already more likely than others to believe that “women who complain about harassment often cause more problems than they solve.”

In the HuffPost/YouGov survey, Americans say by a 42-point margin, 63 percent to 21 percent, that sexual assaults that go unreported or unpunished are a bigger problem than false accusations of sexual assault. That sentiment extends to a majority across party lines, but Democrats are still 20 points likelier than Republicans to consider unreported assaults a bigger issue.

While 92 percent of Americans say touching someone’s genitals without consent is sexual assault, Democrats are 24 points likelier than Republicans, 73 percent to 49 percent, to consider kissing someone without their consent to be sexual assault.

The HuffPost/YouGov poll consisted of 1,000 completed interviews conducted Oct. 14-Oct. 17 among U.S. adults, using a sample selected from YouGov’s opt-in online panel to match the demographics and other characteristics of the adult U.S. population.

Republicans Who Have Withdrawn Their Support For Donald Trump