At the democratic debate last Saturday, Martin O'Malley called Donald Trump a "carnival barker," which was rather offensive-- to carneys everywhere.

Trump may not be able to operate a Guess Your Age or Weight concession on the midway, but he is the perfect side show act. He is now a self-proclaimed psychic.

Monday night in a speech in Knoxville, Tennessee, the Divine Donald told his loyal crowd of minions that he has an "instinct" for predicting terrorism. He stated, "In my book [The America We Deserve] I predicted terrorism because I can feel it, I can feel it, like I can feel good locations, ok, in real estate." Trump added "I really think I have a good instinct for this kind of thing."

This all arises out of Trump's book The America We Deserve, published in 2000, in which he reportedly mentioned Osama Bin Laden by name and the danger of terrorist attacks on a major city by weapons of mass destruction.

Buzzfeed reported on his clairvoyance. However Trump's conservative nemesis RedState cast considerable doubt on his Nostradamus abilities, noting that the Bin Laden threat was well known and widely reported in the media before Trump's book was published.

I too am endowed with psychic powers-- I am SHINE, The Man Who Knows. 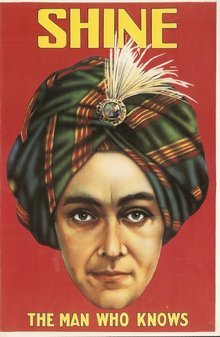 Here are a few of my own predictions:

Trump is 69 years old. On his 70th birthday in June of 2016, he will have officially used up his lifetime allotment of first-person personal pronouns, and will no longer be able to utter the words "Me," "Myself" or "I."

Tongue-tied and exhausted, I anticipate a meltdown, with Donald retreating to his gilt-encrusted Penthouse in Trump Towers, where he will forever get first billing on the building. "I am ready for my close-up, Mr. DeMille."

He will not be nominated as the GOP presidential candidate, thus will not be elected president. However, he will tell us that it was he who voluntarily withdrew from seeking the office.

He will still find the strength to lash out, and assert that his downfall (sorry, "voluntary withdrawal") was caused by the biased media, the GOP, the Democrats, his opponents, his critics, and assorted losers, morons, dummies, and lightweights. He can't or won't blame himself because he had used up his supply of first-person personal pronouns.

President Hillary won't attend any more Trump weddings, and Trump will constantly be reminding us, "She would never have been elected if I had run against her."

He will build his great wall, but it will be around his mansion in Palm Beach. Naturally, Mexico will pay for it-- if he promises to stay inside. When he has guests, as they leave he will tell that he is deporting them.

Trump's complexion will turn more orange and his head will continue to swell. He will be celebrated by children at Halloween-- instead of carving jack-o-lanterns, they will draw faces on basketballs and top them off with banana peels.

But he will rise from the ashes to make an ash of himself again. I see television, publication deals, and speaking engagements on the vast horizon for the half-vast Trump. He will hit the lecture circuit while writing and peddling books.

Look for Ben Carson on that same tour.